Leaders and best, champions of the Big Ten.

Members of the Michigan football team danced in celebration Saturday night, flocking the field at Lucas Oil Stadium in Indianapolis as the Wolverines knocked off the Iowa Hawkeyes 42-3 to win their first Big Ten championship since 2004.

With the win, Michigan is headed to the College Football Playoff as one of the nation’s top four teams. It’s the latest stamp on Harbaugh’s passport with the Wolverines, which before this season was strikingly empty.

Its destination, either the Cotton or Orange Bowl on New Year’s Eve, will be revealed Sunday. The Wolverines, currently ranked No. 2, made a strong case for the top seed after No. 1 ranked Georgia fell at the hands of No. 4 ranked Alabama earlier in the day.

Michigan got the ball rolling early Saturday evening with a pair of explosive plays.

Running back Blake Corum, fully healthy after dealing with injury for the final three regular season games, dashed 67 yards to the end zone on his first carry of the game to put the Wolverines up 7-0.

After forcing an Iowa punt, Michigan needed just one play to double its advantage. Quarterback Cade McNamara pitched it to Donovan Edwards, who threw to wideout Roman Wilson streaking down the sideline for a 75-yard score.

Hassan Haskins, who scored five times in Michigan’s win over Ohio State, was held quiet throughout the first half. Yet, he got into the end zone on the Wolverines’ first drive after halftime with a four-yard dash.

Michigan and Jim Harbaugh are going to the College Football Playoff as the No. 1 or No. 2 team in the entire country.

The Wolverines are now 12-1 and will be no lower than No. 2 in the country in the CFP rankings after dismantling Iowa in the Big Ten Championship, 42-3. Harbaugh yanked one monkey off of his back last weekend by beating Ohio State, and punted another one into the stands tonight in the Big Ten title game and because of it, U-M will be returning to Ann Arbor with some hardware. Michigan wasn’t perfect against the Hawkeyes, but they were certainly the better team by a wide margin. Here’s what stood out…

Blake Corum is still that dude

We aren’t even sure if he’s at 100%, but it doesn’t matter. The dude is electric and has a chance to score every time he touches the ball. Tonight, he did just that on his first carry of the game from 67 yards out. Corum wasn’t used much after that, which makes you wonder just how healthy he is, but he’s a factor when he’s in the game and whoever the opponent is, knows it. 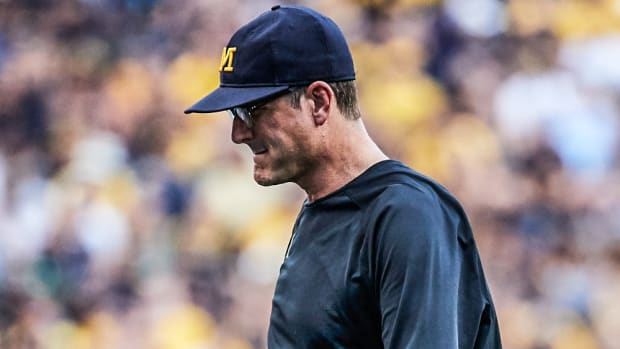 Michigan’s offense was pretty bad in the second quarter, but out of the gate, throughout the third quarter and down the stretch, they moved the ball with big plays and sustained drives en route to a pretty comfortable win. Early in the game, Gattis called Blake Corum’s number with JJ McCarthy in the game and put Iowa’s defense in conflict. Corum took it to the house from 67 yards out. With 5:27 left in the first quarter, Gattis dialed up a beautifully executed halfback pass with freshman Donovan Edwards that hit Roman Wilson in stride for a 75-yard touchdown pass. 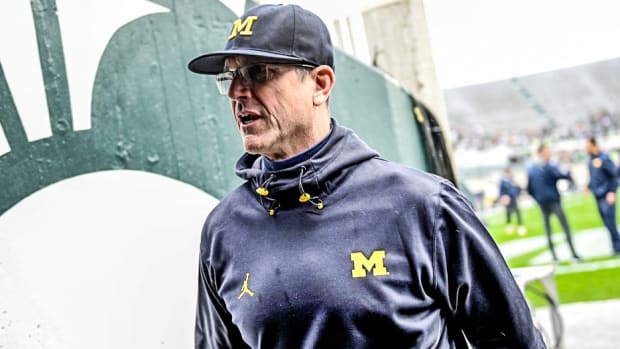 There was no hangover for the No. 2 Wolverines a week after they triumphantly snapped an eight-game losing streak to rival Ohio State to win the Big Ten East. They followed that up with a dominant 42-3 victory over No. 13 Iowa on Saturday night in Indianapolis, ending a 16-year Big Ten championship drought in the process.

With the win, Michigan has almost certainly wrapped up a berth in the College Football Playoff — a first for the program with the most wins in NCAA history.

Michigan reeled off two explosive touchdown plays in the first quarter to jump out to a 14-0 lead. First, Blake Corum broke free for a 67-yard touchdown run. And on the first play of Michigan’s next drive, Michigan broke out a trick play. Cade McNamara threw a backwards pass to running back Donovan Edwards, who looked downfield to throw. Edwards hit Roman Wilson in stride with a beautiful pass, resulting in a 75-yard touchdown.

MICHIGAN HITTING ALL THE BIG PLAYS 😱

Iowa would drive into Michigan territory a few times, but couldn’t do anything to put any sort of scare into the Wolverines. Iowa missed a 33-yard field goal and settled for a 22-yard field goal in the first quarter. And when it trailed 21-3 late in the third, Iowa turned it over on downs from the Michigan 8-yard line.

That pretty much spelled the end for Iowa’s chances of winning the game. And with the way Iowa was operating offensively, those chances were already remote.

An incredible turnaround for Jim Harbaugh

Last year, when Jim Harbaugh and the Wolverines limped to a 2-4 finish in the pandemic-shortened 2020 season, this seemed like something that just might not happen during Harbaugh’s tenure as the head coach of his alma mater.

Harbaugh was born in Toledo, Ohio. His father, Jack Harbaugh, was a football coach, and the family lived in Ohio, Kentucky, Iowa, Michigan, and California. He attended high school in Ann Arbor, Michigan and Palo Alto, California, when his father was an assistant coach at Michigan and Stanford, respectively. After graduation from high school in Palo Alto in 1982, Harbaugh returned to Ann Arbor and enrolled at the University of Michigan and played quarterback for the Wolverines, starting for three seasons. As a fifth-year senior in 1986, he led Michigan to the 1987 Rose Bowl and was a Heisman Trophy finalist, finishing third.

The Chicago Bears selected Harbaugh in the first round of the 1987 NFL Draft. He played 14 years as a quarterback in the NFL, with Chicago from 1987 to 1993, the Indianapolis Colts from 1994 to 1997, the Baltimore Ravens in 1998, and the San Diego Chargers in 1999 to 2000. He first became a regular starting quarterback in 1990 with Chicago. In 1995 with Indianapolis, he led the Colts to the AFC Championship Game, was selected to the Pro Bowl and was honored as NFL Comeback Player of the Year.

From 1994 to 2001, while still playing in the NFL, Harbaugh was an unpaid assistant coach at Western Kentucky University, where his father Jack was head coach. In 2002, he returned to the NFL as the quarterbacks coach for the Oakland Raiders. Harbaugh returned to the college ranks in 2004 as the head coach at the University of San Diego. After leading San Diego to consecutive Pioneer League championships in 2005 and 2006, he moved to Stanford in 2007, where he led the Cardinal to two bowl berths in four seasons, including a win in the 2011 Orange Bowl. Immediately afterward, Harbaugh signed a five-year deal as head coach of the NFL’s San Francisco 49ers, where he led the team to the NFC Championship game in each of his first three seasons after the franchise missed the playoffs for eight consecutive seasons beforehand. He and his older brother, Baltimore Ravens coach John Harbaugh, became the first pair of brothers to serve as head coaches in NFL history. Their teams played in a Thanksgiving Classic game in 2011 and in Super Bowl XLVII at the end of the 2012 season.

Born in Toledo, Ohio on December 23, 1963, Harbaugh is the son of Jacqueline M. “Jackie” (née Cipiti) and Jack Harbaugh. His mother is of half-Sicilian and half-Polish ancestry and his father is of Irish and German ancestry. Both Jim and his brother John were born in Toledo, while his father was an assistant football coach at nearby Perrysburg High School in Perrysburg.

During Harbaugh’s childhood, the family moved frequently, as his father held assistant coaching positions at Morehead State (1967), Bowling Green (1967–1970), Iowa (1971–1973), Michigan (1973–1979), Stanford (1980–1981), and Western Michigan (1982–1986). Harbaugh played for the junior league Ann Arbor Packers and then for Tappan Junior High before moving on to Pioneer High School. When his father became defensive coordinator at Stanford, he transferred to Palo Alto High School, graduating in 1982.

For his NFL career, Harbaugh played in 177 league games with 140 starts. He completed 2,305 of 3,918 passes for 26,288 yards with 129 touchdowns. Particularly during his time with Indianapolis, such as when he led the Colts to come-from-behind wins over the Chiefs and Chargers in the 1995–96 NFL playoffs and a near upset over the No. 2 AFC seed Steelers, he earned the nickname “Captain Comeback” (the second player to be so nicknamed after Roger Staubach) for his ability to win games in the fourth quarter when his team was significantly behind.

Harbaugh is second in the Bears’ record book for completions with 1,023, while Jay Cutler holds the record with 1,034. Harbaugh also ranks second with 1,759 attempts and third in yards with 11,567. In January 2005, he was inducted into the Indianapolis Colts Ring of Honor as one of the most successful and popular players in the club’s Indianapolis era

Russian Federation assailed in report for doping program beyond Sochi, Hockey and Paralympians were also cited, although no athletes are named in the report.