And Sanders’ Tigers captured the title with a performance befitting his Hall of Fame versatility as a cornerback, receiver and returner: scoring touchdowns on offense, defense and special teams.

There are very few that keep it realer than Deion Sanders.

After a grind-it-out 27-10 win over Prairie View A&M to win the SWAC championship, the Jackson State head coach admitted his team didn’t play their best ball, but were still able to pull it out thanks to their effort.

.@DeionSanders was visibly awestruck by the scene at Mississippi Veterans Memorial Stadium after @GoJSUTigersFB won the #SWAC 🏈 title.

“Look at Jackson. … It’s one thing to win, but to win with our people? Jesus, Lord, I thank you.”https://t.co/mAS4GfomPB

“This is unbelievable,” Sanders told ESPN in his postgame interview. “I mean, it started off with a saying that we really embody, what we really felt. We didn’t play our best today but all our guys gave it their best.

“Look at this community… I mean, we’re believing. You can do anything you want to in this world if you just believe and stick to it and be consistent and confident and walk in it.

“Man, I’m so elated right now. It’s one thing to win but to win with our people, Jesus. Lord, I thank you.”

Now the 11-1 Tigers move on to meet South Carolina State in the Celebration Bowl. Essentially the national championship of HBCU football.

It’s been quite the turnaround for the first-time head coach. Sanders led the Tigers to a 10-1 regular season record, going undefeated in the SWAC. With coach Prime on the sideline, Jackson State is currently ranked in the top 15 of the FCS Coaches Poll. Sanders is also in the running for the Eddie Robinson award.

The victory capped off an impressive season for ‘Coach Prime,” who earned SWAC coach of the year honors, shared the national spotlight with Alabama’s Nick Saban and saw his son, Jackson State quarterback Shedeur Sanders named SWAC freshman of the year.

Not bad considering Sanders is just under 15 months into his first head coaching job. This is his first full season after a 4-3 spring campaign shortened by COVID-19 and despite missing three games following toe surgery. He navigated the sidelines with his left leg propped on a scooter that he sometimes sat on.

“This is unbelievable,” Sanders said. “We didn’t play best, but all our kids gave it our best. It’s one thing to win, but to win without me? Lord, I thank you.”

Sanders has also raised the profile of HBCU football and generated Name, Image and Likeness (NIL) opportunities for players. That’s in addition to growing his personal brand through national ads with Alabama coach Nick Saban and being mentioned as a candidate for FBS coaching vacancies.

After capturing its first league title since 2007, Jackson State’s next stop is the Celebration Bowl against MEAC champ South Carolina State on Dec. 18 in Atlanta for the Black college national championship. 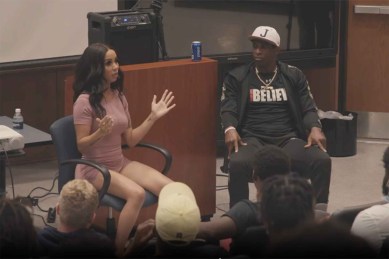 “We’ve got to finish what we’ve started,” Sanders said. “This journey that we’re on, we’ve got to finish it.” Sanders’ enthusiastic embrace of NIL opportunities has helped JSU and SWAC players cash in with endorsements. The conference ranks 17th in the country in NIL compensation according to Opendorse.com, a platform that aims to help athletes monetize their brand.

They’re the only HBCU conference to crack the top 20 NIL endorsement rankings.

Sanders is getting a good run through entertaining commercial spots for Aflac insurance with Saban and the iconic Duck. Former Dallas Cowboys teammate and fellow Hall of Famer Troy Aikman has appeared at JSU along with recently deceased Memphis rapper Young Dolph and social media model and former JSU student Brittany Renner, who talked with players about social situations.

The players were apparently paying attention.

There was notoriety about new uniforms with players’ names and rumblings of FBS coaching openings.

Through it all, Sanders’ remained focused on shining a light on HBCU football and its players. SWAC Commissioner Dr. Charles McClelland believes he succeeded in that endeavor.

“He’s put additional eyes on HBCUs,” McClelland said before the game. “Make no mistake about it, I don’t think Eddie George is the coach at Tennessee State if Coach Prime wouldn’t have taken that step first.

That impact is significant. It transcends fans, it transcends sponsorships. It goes to the heart and soul and culture of who we are.”

The Panthers (7-5) led twice, including 10-7, before Isaiah Bolden returned a kickoff 91 yards for the go-ahead score in the second quarter. James Houston pulled in a nifty deflection for an interception and 5-yard return for a TD before Peytton Pickett rushed for a 5-yard TD late in the third quarter to give the Tigers some breathing room.

When it was all said and done Saturday, Sanders had once again taken center stage and put Jackson State, the SWAC and HBCU football in the spotlight.

“They just need the opportunity,” the coach said. “At least give us a mention. Give us some type of respect. It’s for us to stand up for that. We must. The kids deserve it.”

Thirty-two years after he was drafted No. 5 overall by the Atlanta Falcons in 1989, Deion Sanders will return to Atlanta to coach his first bowl game as a college football coach.

Jackson State prevailed with an 27-10 win over Prairie View in the SWAC Championship game at Mississippi Veterans Memorial Stadium on Saturday.

And it clinches Jackson State’s first berth in the Cricket Celebration Bowl, the de-facto historically black college national championship game between the champions of the two Division I HBCU football conferences, the SWAC and the MEAC.

This year, there will be a new champion regardless of who wins. The Celebration Bowl was established in 2015, and four of the five games have been won by North Carolina A&T, which recently left the MEAC for the Big South conference. Grambling State won in 2016. The game was canceled in 2020 due to COVID-19.

Jackson State was trailing 10-7 in the second quarter. The Panthers had momentum after a half-back pass from Ty Holden resulted in an early lead, and receiver Jailon Howard breaking out Sanders’ signature dance celebration.

But then Isaiah Bolden fielded a kick at the Jackson State 9-yard line, sidestepped a defender, and turned on the jets. The SWAC’s top return specialist showed his speed, racing down the sideline for a 91-yard score and the Tigers never trailed again.

Bolden came into the game leading the SWAC in kick return yards with 500 in eight games. The TD ties Bethune Cookman’s Darnell Deas for the SWAC lead with two.

Here are three observations from the Tigers’ win against Prairie View A&M (7-5).

For the first time since he returned to action against Southern on Nov. 13, Sanders was on the sideline without a motorized wheelchair.

The second-year coach was back on a scooter, as he had been for several games before toe surgery that caused him to miss three games and be hospitalized for nearly a month.

It’s a positive sign that Sanders’ health is continuing to improve. He said Wednesday on his podcast that he had lost nearly 30 pounds while he was in the hospital. He said he weighed 177 pounds and that he normally weighs 205.

Now he’s back and looks like he’s gaining strength each week. He’s also posted videos of himself  in the weight room on his Instagram page.

Jackson State was trailing 10-7 in the second quarter. The Panthers had momentum after a half-back pass from Ty Holden resulted in an early lead, and receiver Jailon Howard breaking out Sanders’ signature dance celebration.

But then Isaiah Bolden fielded a kick at the Jackson State 9-yard line, sidestepped a defender, and turned on the jets. The SWAC’s top return specialist showed his speed, racing down the sideline for a 91-yard score and the Tigers never trailed again.

Bolden came into the game leading the SWAC in kick return yards with 500 in eight games. The TD ties Bethune Cookman’s Darnell Deas for the SWAC lead with two.

Balanced pass-rush gets the job done

Rushing the passer has been a major strength for Jackson State all season, and Saturday was no different.

The Tigers registered four sacks, each by a different player.

By the end, it had worn the Panthers down and allowed the Tigers secondary to take care of business.

James Houston, who is among the leaders in FCS for sacks, opened the lead up to double-digits  on an interception return for touchdown in the third quarter Cam-Ron Silmon-Craig added a pair of interceptions,

JACKSON, Miss. — Near the heart of downtown Jackson, customers park their cars along the sidewalk outside of Dynastics Screen Printing. The longtime company—tucked in between two small Black-owned businesses—is Mississippi’s oldest black-owned screen-printing entity that has served Jackson customers with their promotional needs and screen printing for more than three decades.

As customers enter the store—one that is not as big as three linen closets in length—customers are greeted by a rack of blue, white and red hoodies, sweatshirts, long sleeve T-shirts that are neatly situated next to a framed Clarion Ledger front page sports article of the Tigers’ 34–27 double-overtime loss to Southern University on Dec. 7, 2013, the last memory of JSU playing in a Southwestern Athletic Conference championship game.

Around the corner, up high on the wall sits an autographed picture of one of JSU’s four Pro Football Hall of Famers—Robert Brazile—as the phone constantly rings and a line of customers tightly curved inside and pushing back to the store’s entrance patiently wait for Richard Shaw—the owner of Dynastics—to fulfill their apparel requests.

“I’ve had some good days and I’ve had some bad days but right now, we cannot keep enough of JSU apparel in supply,” says Shaw, a 1977 and centennial graduate of JSU. “With Deion [Sanders] coming here, I wish I could keep up with everything. But, my business has doubled and I thank God for it.”

Deion Luwynn Sanders Sr. (born August 9, 1967), nicknamed “Prime Time” and “Neon Deion”, is an American former professional football player and athlete, sports analyst, and football coach. He is often considered to be one of the most talented NFL players of all time. He is currently the head football coach at Jackson State University. He played in the National Football League (NFL) for 14 seasons as a member of the Atlanta Falcons, San Francisco 49ers, Dallas Cowboys, Washington Redskins, and Baltimore Ravens. Sanders was also a baseball outfielder for nine seasons in Major League Baseball (MLB), where he played with the New York Yankees, Atlanta Braves, Cincinnati Reds, and San Francisco Giants. He won two Super Bowl titles and made one World Series appearance in 1992, making him the only athlete to play in both a Super Bowl and a World Series.

Sanders attended Florida State University, where he was recognized as a two-time All-American in football, and also played baseball and ran track. He was drafted by the Falcons in the first round of the 1989 NFL Draft and played football primarily at cornerback, but also as a kick returner, punt returner, and wide receiver. During his career, he was named to eight Pro Bowls, received first-team All-Pro honors six times, and made consecutive Super Bowl appearances in Super Bowl XXIX with the 49ers and Super Bowl XXX with the Cowboys, winning both. He was inducted into both the Pro Football Hall of Fame and the College Football Hall of Fame in 2011.

Following the conclusion of his athletic career, Sanders became an analyst for CBS Sports, NFL Network, and Barstool Sports. He was also the offensive coordinator for the football team at Trinity Christian School – Cedar Hill, which his sons attended, from 2017 until 2020 when he was hired by Jackson State.[2] Sanders founded the Prime Prep Academy charter school in 2012 where he coached until the school closed in 2015 due to financial insolvency. Additionally, he starred in the show Deion Family Playbook, which debuted in 2014. DEION SANDERS AND THE JACKSON STATE FOOTBALL TEAM WINS THE SWAC 2021 CHAMPIONSHIP.