Elaine Thompson-Herah came within 0.05 seconds of Florence Griffith Joyner’s 33-year-old 100m world record as she clocked the second fastest time ever at the Diamond League meeting in Eugene.

The Jamaican blazed to victory at the Prefontaine Classic in 10.54sec, eclipsing the 10.61s she ran to defend her Olympic title in Tokyo last month.

She finished well clear of compatriot Shelly-Ann Fraser-Pryce, who clocked 10.73.

Griffith-Joyner is the only woman to have clocked a faster time over the distance, having set the world record of 10.49 seconds in 1988.

Thompson-Herah was confident she could beat that time – and break the 200m record as well.

Sha’Carri Richardson, the American who missed the Olympics after testing positive for cannabis, finished last in 11.14 in her first race back following a one-month ban.

Richardson, 21, was defiant despite the underwhelming result in a trackside interview with NBC’s Lewis Johnson after the race, describing it as “a great return back to the sport”.

“This is one race,” Richardson said. “I’m not done. You know what I’m capable of. Count me out if you want to. Talk all the shit you want. Because I’m here to stay. I’m not done. I’m the sixth fastest woman in this game ever and can’t nobody ever take that from me.”

She added: “I wanted to be able to come and perform after having a month off and dealing with all I was dealing with. I’m not upset with myself at all.”

Thompson-Herah, who completed a 100m-200m double for a second successive Olympics in Tokyo, said she surprised even herself at Hayward Field, beating Fraser-Pryce by nearly two-tenths of a second. Shericka Jackson finished third to repeat the Jamaicans’ Tokyo podium sweep.

“To come back with a (personal best) after the championships, that is amazing,” said Thompson-Herah. “I haven’t run that fast in five years.”

In the men’s 100m event, Tokyo bronze medallist Andre de Grasse won in a wind-aided 9.74, with Americans Fred Kerley and Ronnie Baker finishing in 9.78 and 9.82, respectively.

“I didn’t feel like I really executed that day in the Olympic finals, I didn’t get off the blocks,” said de Grasse. “Today I feel like I did a good job of coming off the blocks and my transition was good so I knew it was going to be a good race after that.”

The meet saw speedy performances across the board, as American Noah Lyles surged out of the turn to win the men’s 200 metres in a world-leading 19.52 seconds after finishing a disappointing third in Tokyo.

“It’s a tight little bow on the end of the season,” said Lyles. “I feel like (after) five sessions of therapy I was able to let go of what happened in Tokyo.”

“I feel like I’m just running on a high, and just going back to back to back with things, I haven’t really had time to sit down and actually embrace it,” said the 19-year-old American. “So hopefully with the next couple of weeks I’ll get to do that.”

With her key rival and world record holder Sydney McLaughlin absent, Tokyo silver medallist Dalilah Muhammad made light work of the 400m hurdles, winning by more than one second in 52.77.

In the women’s 3,000m steeplechase, Kenya’s Norah Jeruto put up a world-leading 8:53.65 to win, as American Courtney Frerichs took second in 8:57.77 after winning silver in Tokyo.

Elaine Thompson-Herah of celebrates winning the women’s 100m on Saturday. The Jamaican, who defended her 100-meter and 200-meter Olympic titles at Tokyo 2020, ran a world lead time of 10.54 seconds as she continued to flirt with breaking Florence Griffith-Joyner’s world record of 10.49 seconds, set in 1988.

Speaking after the race, Thompson-Herah said she was surprised to have clocked such a fast time so quickly after the Olympic Games.

“To come back with a (personal best) after the championships, that is amazing,” Thompson-Herah told reporters. “I haven’t run that fast in five years.”

“I have so much more in me, so yes, it’s possible,” she added, when asked whether she could set new 100-meter and 200-meter world records. 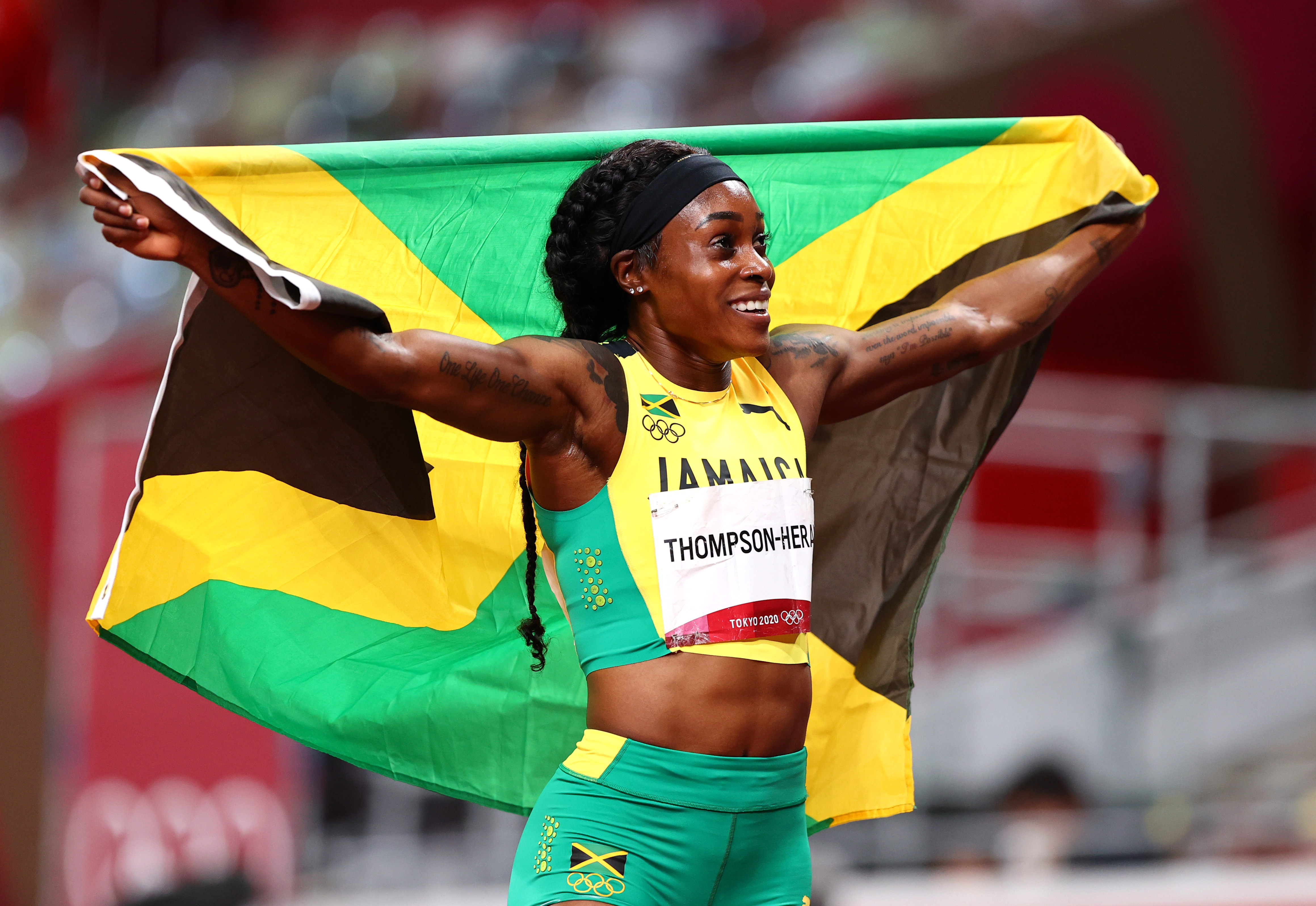 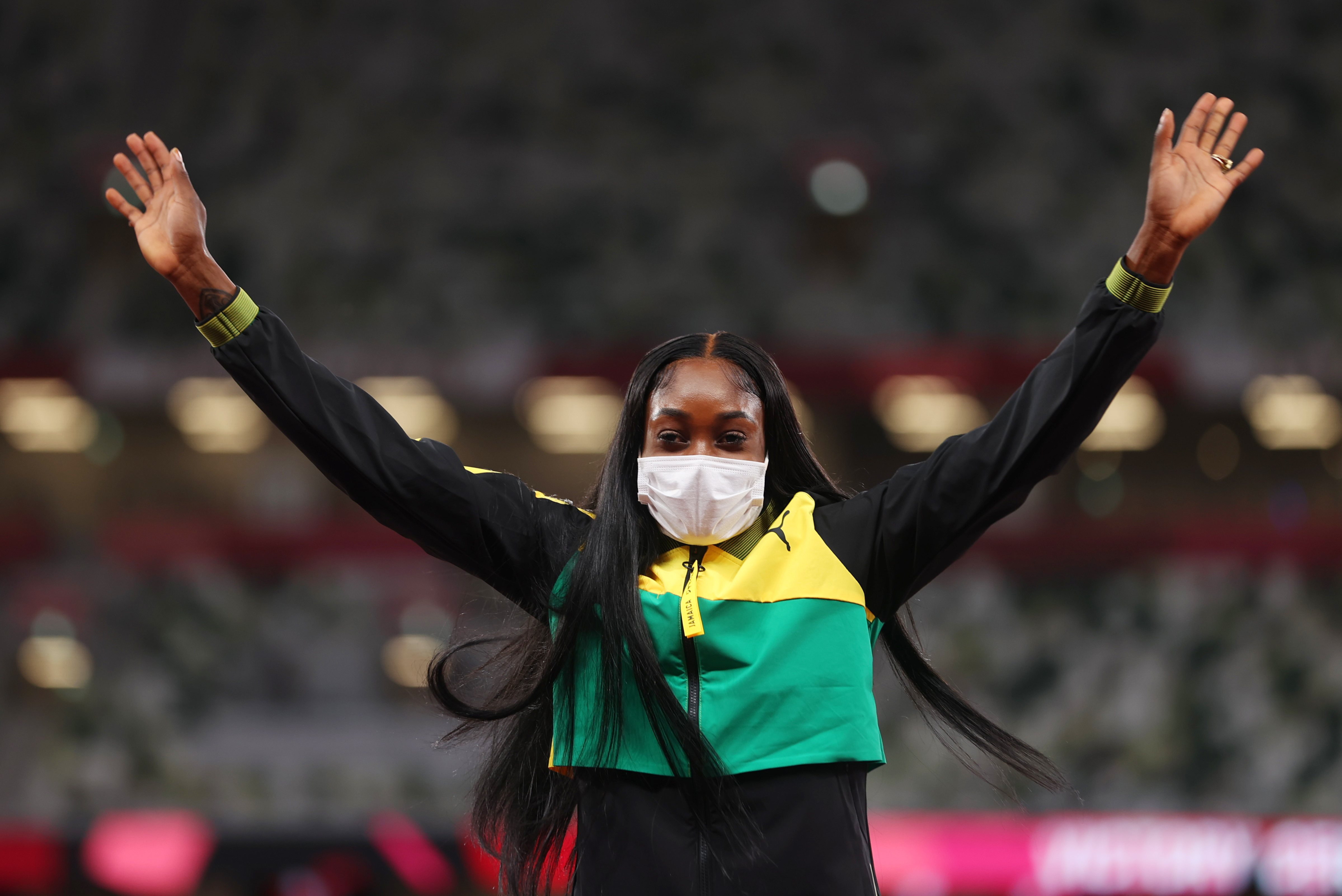 In 2021, she set an Olympic and Jamaican national record of 10.61 seconds in the 100 metres at the 2020 Summer Olympics, making her the fastest woman alive and the second-fastest woman in history. On 21st August 2021 in the Prefontaine Classic, she ran a new personal best of 10.54s. She has recorded the second-fastest times over both 100 metres and 200 metres, clocking in at 10.54s and 21.53s, respectively, the latter which she set at the Tokyo Olympics final.

Thompson-Herah began competing internationally in 2013. In 2015 she achieved her first finish under 11 seconds in the 100 metres, and she ran 21.66 seconds in the 200 metres. She was the 2019 Pan American Games champion and a three-time Diamond League winner.

Thompson is a native of Banana Ground in Manchester Parish, Jamaica.  Running for Christiana High School and later Manchester High School, Thompson was a good but not outstanding scholastic sprinter; her best result at the Jamaican ISSA Grace Kennedy Boys and Girls Championships came in 2009, when she placed fourth in the Class Two 100 metres in 12.01 seconds.  In 2011, her final year at Manchester High, she was left off the track team for disciplinary reasons.

In 2013, she clocked a seasonal best of 11.41s at the Gibson Replays and placed second behind Carrie Russell at the Jamaican Intercollegiate Championships. At the Central American and Caribbean Championships in Morelia, she won gold in the 4 × 100 metres relay, running the first leg on the Jamaican team as it won in 43.58s.

In 2014, Thompson won her first intercollegiate title, placed fifth in 11.26s at the national championships, and had a seasonal best of 11.17s. She represented Jamaica at the Commonwealth Games in Glasgow, running in the 4 × 100 metres relay heats; Jamaica won their heat in 42.44s, and went on to win gold in the final with Thompson-Herah not in the line-up.

Thompson made her international breakthrough in 2015.  She repeated as Jamaican intercollegiate champion in March and broke 11 seconds for the first time at the UTech Classic on 11 April, running a world-leading 10.92 seconds. She then ran 10.97 seconds at the Jamaica International Invitational in Kingston, defeating a field that included Blessing Okagbare and Allyson Felix.  At the Pre Classic in Eugene, Thompson was narrowly beaten by English Gardner in the B-race as both were timed in 10.84 seconds; as of 27 July 2015, this was Thompson’s personal best in the 100m and ranked her 30th on the world all-time list.

Thompson-Herah was expected to run the 100 metres at the Jamaican National Championships, which doubled as trials for the 2015 World Championships in Beijing; however, her coach Stephen Francis pulled her from that event and instead had her concentrate on the 200 metres, in which she had set a personal best of 22.37s in May.  The move generated controversy in Jamaica; Francis stated that Thompson-Herah was not ready to double and that she had been prepared for the 200m in which her main weakness, the start, would not play as large a role.  Thompson won the national 200m title in 22.51s, qualifying for the World Championships.

At the Beijing World Championships, Thompson-Herah won a silver medal, behind Dafne Schippers of Netherlands. Thompson’s time of 21.66s was faster than the previous championships record but 0.03s slower than Schippers. Fellow Jamaican Veronica Campbell Brown was third in 21.97s.

Thompson-Herah at the 2016 Rio Olympics

On 1 July, Thompson-Herah set a personal best in the 100m with a time of 10.70s, winning the event at the Jamaican Championships. She did not advance to the semi-finals in the 200m running only a 23.34s.

She was the first female Jamaican sprinter to win the 100m and 200m at one Olympic Games and the seventh overall. She also ran in the national 4 × 100 m relay team which placed second, thus leaving Rio de Janeiro with three medals.

In 2017, Thompson-Herah was in the team which won a gold medal in the 4 × 200 metres relay at the World Relays, setting competition and national record with a time of 1:29.04.

At the 2019 World Championships in Doha, she finished 4th in the 100m running 10.93s. Thompson-Herah achieved a time of 22.61s in the 200m heats, qualifying for the semi-finals, but she did not start due to an Achilles tendon injury.

In June 2021, at the Jamaican Championships, she placed third in her two signature events with times of 10.84s and 22.02s respectively, qualifying in both events for the delayed 2020 Tokyo Olympics. On 6 July, she achieved a time of 10.71s in the 100m, her fastest time since 2017, and 0.01 seconds off her personal best. She defeated Fraser-Pryce and won the World Athletics Continental Tour’s Székesfehérvár Memorial in Hungary, setting a meet record.

At the Tokyo Olympics, Thompson-Herah placed first in the women’s 100 metres final, winning the gold medal as fellow Jamaican athletes Shelly-Ann Fraser-Pryce and Shericka Jackson received the silver and bronze medals, respectively. She achieved the second-equal fastest time in history, with an Olympic record of 10.61 seconds, breaking Florence Griffith-Joyner’s Olympic record of 10.62 seconds set in 1988. Competing in the 200 metres, she first equalled her personal best of 21.66s in the semi-finals. In the final, she won the gold medal with a personal best time of 21.53.

In August 2021, competing in the Prefontaine Classic in Eugene, Oregon, Thompson-Herah won the 100m with a new personal best of 10.54 seconds, the second fastest time in women’s history.

Thompson is married to former athlete and coach Derron Herah.

Thompson (center) at the 2016 Rio Olympics

THE BOSTON CELTICS VS THE CLEVELAND CAVALIERS, WILL THE CELTICS GET THE JOB DONE?

Robert F. Smith Founder, Chairman and CEO Vista Equity Partners, and David Steward, who is the founder and chairman of IT provider World Wide Technology, are on the Forbes List Of The 400 Richest Americans