ESPN Films today announced a multi-part documentary series that will tell the story of one of the greatest icons in modern sports and reveal the man behind the icon. Derek Jeter’s arrival with the New York Yankees helped transform a struggling franchise into a storied dynasty, all within a time of great change in New York City. As Jeter forged a Hall of Fame career, he established himself as the model Yankee both on- and off-the field, with his style, class, and charisma. Jeter’s commitment to winning came with a rare combination of competiveness and cool, traits he has taken with him into retirement as he tackles new tests as a team owner and executive with the Miami Marlins and as a father. As he prepares to enter Cooperstown this July, he is pulling back the curtain to reveal what it was really like to be “The Captain.”

Emmy-winning director Randy Wilkins (“86-32,” “Docket 32357,” “Dear…”) will tell the story of Jeter’s professional and personal triumphs and challenges. The documentary series will use Jeter’s journey as a vessel to tell a larger cultural story that explores race, family, community, rivalries and more. The heartbeat of the project is candid access to the man who helped restore shine to a team, a city, and a culture.

The series is being executive produced by Spike Lee, Mike Tollin, Mandalay Sports Media, Excel Sports Management’s media arm Excel Media, and Connor Schell, in association with The Players’ Tribune and Major League Baseball. It is slated to premiere on ESPN and ESPN+ in 2022.

Derek Sanderson Jeter (/ˈdʒiːtər/ JEE-tər; born June 26, 1974) is an American former professional baseball shortstop, businessman, and baseball executive. He has been the chief executive officer (CEO) and part owner of the Miami Marlins of Major League Baseball (MLB) since September 2017. As a player, Jeter spent his entire 20-year MLB career with the New York Yankees. He was elected to the Baseball Hall of Fame in his first year of eligibility in 2020; he received 396 of 397 possible votes (99.75%), the second-highest percentage in MLB history and the highest by a position player.

A five-time World Series champion, Jeter is regarded as one of the primary contributors to the Yankees’ success of the late 1990s and early 2000s for his hitting, base-running, fielding, and leadership. He is the Yankees’ all-time career leader in hits (3,465), doubles (544), games played (2,747), stolen bases (358), times on base (4,716), plate appearances (12,602) and at bats (11,195).[1] His accolades include 14 All-Star selections, five Gold Glove Awards, five Silver Slugger Awards, two Hank Aaron Awards, and a Roberto Clemente Award. Jeter was the 28th player to reach 3,000 hits and finished his career ranked sixth in MLB history in career hits and first among shortstops. In 2017, the Yankees retired his uniform number 2.

The Yankees drafted Jeter out of high school in 1992, and he debuted in the major leagues at age 20 in 1995. The following year, he became the Yankees’ starting shortstop, won the Rookie of the Year Award, and helped the team win the 1996 World Series. Jeter continued to excel during the team’s championship seasons of 1998–2000; he finished third in voting for the American League (AL) Most Valuable Player (MVP) Award in 1998, recorded multiple career-high numbers in 1999, and won both the All-Star Game MVP and World Series MVP Awards in 2000. He consistently placed among the AL leaders in hits and runs scored for most of his career, and served as the Yankees’ team captain from 2003 until his retirement in 2014. Throughout his career, Jeter contributed reliably to the Yankees’ franchise successes. He holds many postseason records, and has a .321 batting average in the World Series. Jeter has earned the nicknames “Captain Clutch” and “Mr. November” due to his outstanding play in the postseason.

Jeter was one of the most heavily marketed athletes of his generation and is involved in numerous product endorsements. As a celebrity, his personal life and relationships with other celebrities has drawn the attention of the media.

Kalamazoo Central High School inducted Jeter into its athletic hall of fame in 2003 and renamed its baseball field in his honor in 2011. In 2015, Jeter was inducted into the New Jersey Hall of Fame. The Yankees retired Jeter’s uniform number and unveiled a plaque in his honor that was installed at Monument Park in a pregame ceremony on May 14, 2017.

On January 21, 2020, Jeter was elected to the Baseball Hall of Fame as part of its class of 2020 in his first year of eligibility, only one vote shy of being only the second unanimous selection in Hall of Fame history. His 99.7% of the vote was second only to Mariano Rivera (100%), and ahead of Ken Griffey (99.3%) in the history of Hall of Fame voting. 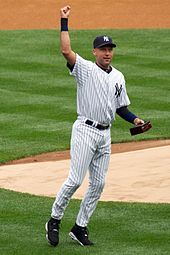 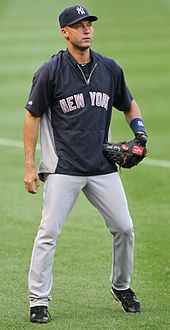 Jeter warming up before a game in 2011

ALBERT PUJOL AND L.A. ANGELS AGREE ON A 10 YEAR DEAL

Panama doing it for Amilcar Henriquez, A Former Panamanian footballer