Super Stock Rallies to Capture Arkansas Derby, and what about the Kentucky Derby, 2021: “Who’s in, out and on the points bubble”

After a series of qualifying stakes that stretches back to September, the final prep of them all, the $1 million Arkansas Derby (G1) at Oaklawn Park, brought down the curtain on the chase for spots in the Kentucky Derby Presented by Woodford Reserve (G1) and left one horse standing tall as a clear-cut favorite for the May 1 opening leg of the Triple Crown.

When a speed duel between 3-10 favorite Concert Tour  and Caddo River  set the stage for 12-1 shot Super Stock  to win the Arkansas Derby, it also pretty much ensured that Godolphin’s unbeaten 2-year-old champion Essential Quality , the Toyota Blue Grass Stakes (G2) winner, will be the favorite for the Run for the Roses.

Favorites, of course, do not always finish first, and the Arkansas Derby continued a dominant theme in the eight all-important 170-point preps. Essential Quality, who tops the Kentucky Derby leaderboard with 140 points, was the only favorite from that group of races to walk away with a victory.

Gary and Mary West’s homebred Concert Tour could have given Essential Quality a run for his money in the betting pools on the first Saturday in May had he added the Arkansas Derby to his 3-for-3 record for two-time Triple Crown-winning trainer Bob Baffert, but contesting a hot pace caught up with the Rebel Stakes (G2) winner as he finished third, beaten by a little more than 2 1/2 lengths.

“He’s there and just got tired there at the end. He’s a young horse,” said Baffert, who also sent out Hozier  who finished sixth and last after a runner-up effort in the Rebel. “It was a good race, but I was more disappointed in my other horse in the race. (Hozier), he got tired early. Those things happen. You get beat and try to figure it out. They’re still young and they’re still having these races. Sometimes, you learn more from a loss than a win. Right now, he got beat. I can’t make any excuses for him right now.”

Everything worked out perfectly for Super Stock, a son of Dialed In   owned by Erv Woolsey and Keith Asmussen, the father of winning Hall of Fame trainer Steve Asmussen. Benefiting from a contested pace and the conditioning from a fourth-place finish behind Concert Tour in his 3-year-old debut, the March 13 Rebel Stakes, Super Stock proved best in the final furlong as he swept past the tiring leaders and pulled away to a 2 1/2-length victory for his second win in eight career starts.

“It is a truly blessed moment to have this sort of success with this horse,” said Steve Asmussen, whose son, Keith, rode Super Stock in his first three starts and was aboard for the colt’s maiden win. “To have my mom and dad here, you think about all he has done for the family already, and now to win the Arkansas Derby on such a beautiful day. God is great.”

Super Stock, who was third in both the very first Kentucky Derby prep, the Iroquois Stakes (G3) and the Claiborne Breeders’ Futurity (G1), scooped up 100 qualifying points for his victory and vaulted from 31st on Saturday morning to third by nightfall with 109 points.

“We never, ever imagined in our wildest dreams that we would be able to compete in racing at this level,” said Marilyn Asmussen, the wife of co-owner Keith Asmussen and Steve’s mother. “To see your son successful at what he’s chosen to do in life, there’s no bigger reward for a parent than that. This will be embedded in our hearts forever.”

Caddo River was awarded 40 points for edging Concert Tour by a head for second and moved up the ladder from 30th to 13th with 50 points. Cox said he would huddle with owner John Ed Anthony before deciding whether to point the son of Hard Spun   toward the Kentucky Derby or the May 15 Preakness Stakes (G1).

“He set a very fast pace and he got passed in the stretch by Concert Tour but then battled back to get second in a very good effort,” Cox said.

Concert Tour already had a spot locked up in the Kentucky Derby field thanks to 50 points from his Rebel win, but even though he moved up two spots to ninth with 70 points, he lost some stature in suffering his first loss in four career starts.

In the Rebel, it was Concert Tour who grabbed the early lead and Caddo River who chased before tiring to fifth.

But in Saturday’s rematch, it was Caddo River and Florent Geroux, who set the quick early fractions of :22.62 and :46.51 with Concert Tour and Joel Rosario pressing the pace in a field of six.

Though the son of Street Sense   poked a head in front at the eighth pole, neither he nor Caddo River could fend off the late bid of Super Stock and Ricardo Santana Jr. in the 3-year-olds’ first try at nine furlongs.

Get Her Number  was fourth to gain 10 points but is well removed from the bubble for the 20-horse field at No. 26 with 20 points.

Hozier also has 20 points and is right behind in 27th.

Barring any defections, Sainthood  is now 20th on the Leaderboard with 40 points.

Super Stock and Santana were third or fourth much of the way before launching his winning rally in the final furlong that propelled him across the finish line in 1:50.92 and triggered a $26.40 win price.

Bred by Pedro Gonzalez and P. J. Gonzalez, Super Stock is out of the Closing Argument  mare Super Girlie . Of her five foals to race, four are winners and he is the first graded stakes winner. She also has a weanling colt by Mendelssohn  .

The half brother to the grade 1-placed Bouje Girl was purchased by his owners for $70,000 from the Taylor Made Sales Agency consignment at the 2019 Keeneland September Yearling Sale. Saturday’s win pushed his earnings well past that figure to $804,762. 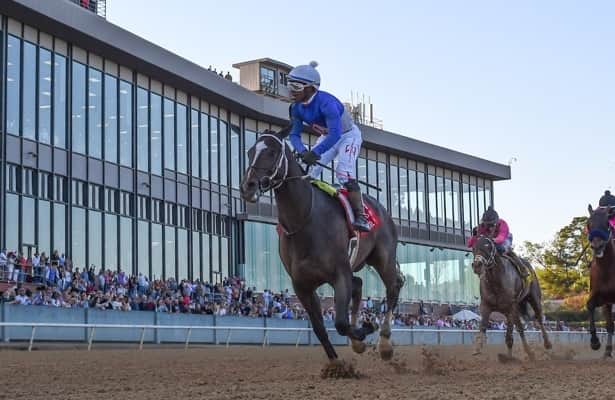 That’s a wrap. The 2021 Kentucky Derby prep season came to an end on Saturday with the Grade 1 Arkansas Derby from Oaklawn and the Lexington Stakes (G3) at Keeneland.

After these last two qualification races, a pair of horses from outside the top 20 earned their way into the Kentucky Derby field, while another 3-year-old just missed out and is currently ranked at number 21.

Let’s jump in and analyze who’s in, out or on the bubble by running down the changes prompted by this weekend’s results before turning to the official points standings.

By finishing fifth in the Rebel Stakes (G2) after winning the Smarty Jones, Caddo River was also up against it in the Arkansas Derby (G1). He had only 10 points going in, so he had to finish first or second. As soon as it began to look like his Kentucky Dreams were fading, the son of Hard Spun fought back in the final furlong to finish as the runner-up. The effort earned him a spot in the top 20 and guaranteed him a place in the Kentucky Derby’s starting gate.

Winning the final prep race has become a common trend for the eventual Kentucky Derby winner, so Concert Tour will have to overcome a poor performance in the Arkansas Derby as he pushes on to Churchill Downs. In nine of the last 11 years, the Kentucky Derby champion won their final prep race. The two outliers came from the Arkansas Derby: Super Saver (second in 2010) and Country House (third in 2019). If Concert Tour is in position to have a legitimate chance at winning the roses at the top of the stretch, he will have to prove he can handle the added distance in the Kentucky Derby. He performed worse at 1 1/8 miles on Saturday than in the Rebel at 1 1/16 miles.

He was a late Triple Crown nominee after coming in second in the UAE Derby (G2), his first loss after two Meydan wins to start his career.

After winning his first two, the Mark Casse trainee finished second in the Florida Derby (G1) to Known Agenda, who is No. 5 on the leaderboard.

After breaking his maiden on fourth try, his runner-up effort in the Wood Memorial (G2) gave him the 40 points he needs to start in the Kentucky Derby for Todd Pletcher.

The Todd Pletcher trainee punched his Derby ticket with a second-place finish in the Jeff Ruby Steaks (G3). His only win came when he broke his maiden at 1 1/16 miles on second try in February.

Cracking the top 20 required a top-three finish in the Lexington Stakes, but Proxy finished fourth. After finishing second in the Lecomte (G3) and Risen Star (G2) and fourth in the Louisiana Derby (G2), Proxy had a solid chance of breaking through, but he came up one place shy of moving into the Kentucky Derby field. He could advance into the field because of defection, but trainer Michael Stidham said before the Lexington that he was unlikely to pursue the Kentucky Derby.

His loss to Essential Quality (No. 1 on the leaderboard) and Highly Motivated (No. 14) in the Blue Grass (G2) put him out of Kentucky Derby contention – for now.

After two wins last year, he has made the board in three starts as a 3-year-old but failed to score. Finished fourth in the Blue Grass.

He earned his points with third-place finishes in the San Felipe (G2) and the Santa Anita Derby (G1) after breaking his maiden on debut in February.

Started the year with an allowance win, but his fourth-place finish in the Risen Start (G2) and third in the Louisiana Derby (G2) weren’t enough to get him in the Kentucky Derby.

Get Her Number, 20 points

These hopefuls are unlikely to make it to the Kentucky Derby starting gate as 20 points leaves them too far outside the top 20. They all are nominated for the Triple Crown, however, so some of these 3-year-olds likely will be considered for the Preakness Stakes by their connections.

His sole win came in the Kentucky Jockey Club (G2), followed by a sixth-place finish in the Rebel and a fifth in the Blue Grass.

“THESE ARE THE FACTS”: “JERRAL WAYNE JONES”, “THE OWNER OF THE COWBOYS”, IS THE MAN, HE ELEVATED THE “NFL” TO WHAT IT IS TODAY. HE BROUGHT MORE “REVENUE” TO THE NFL THAN ANY OTHER “OWNER” IN IT’S ENTIRE “EXISTANCE”. THAT’S A FACT. THE PEOPLE (OWNER’S) WHO FOUGHT HIM WHEN HE CAME INTO THE LEAGUE HAS APPRECIATED FROM HIS BUSINESS EXPERTISE AND SHOULD TOTALLY BE APPRECIATIVE OF ALL OF THE REVENUE THAT THEY HAVE BEEN REWARDED BECAUSE OF HIS DRIVEN FORCE TO BE SUCCESSFUL AS AN OWNER. THEY FOUGHT HIM TOOTH AND NAIL INITIALLY, AND NOW THAT HE HAS REACHED THE TOP OF THE WORLD IN THIS INDUSTRY, YOU’VE GOT SOME IDIOTS THAT ARE ATTEMPTING TO DESTROY THE MAN WHO SAVED THE NFL. BECAUSE OF THIS MAN, THE NFL’S ADVERTISING HAS QUADRUPLED SINCE HIS ARRIVAL TO THE LEAGUE. ALL MARKETS, TO INCLUDE THE SMALLEST OF ALL HAVE GONE FROM RED TO BLACK SINCE THIS MAN’S ARRIVAL. LOOK AT THE VALUATIONS OF ALL OF THE TEAMS PRIOR TO HIS EXISTANCE IN THE LEAGUE AND SINCE HE’S BECOME AND OWNER. THOSE BOYS SHOULD HAVE A STATUE OF JERRY JONES IN FRONT OF THE NFL’S CORP. OFFICES. HE FOUGHT THE NFL ON SEVERAL ISSUES, WON, AND THE NFL HAS APPRECIATED FROM THOSE OPPORTUNITIES THAT WERE PRESENTED TO JERRAL JONES, WHICH HE OVERCAME AND CONVINCED THESE (I LIKE IT THE WAY IT IS GUYS) NFL THAT THIS IS THE WAY WE WILL WIN AND GROW, GOING FORWARD. YES, THE TEXT, IT’S ALL CAPS, BECAUSE IT’S BIG, IT’S HUGE, IT’S BECAUSE OF JERRAL WAYNE JONES THAT THE NFL IS WHERE IT IS FROM AN ECONOMIC STANDPOINT.

The immeasurable impact of Tiger Woods. The Big Cat looked smooth with his 3-wood in Albany at the Hero World Challenge