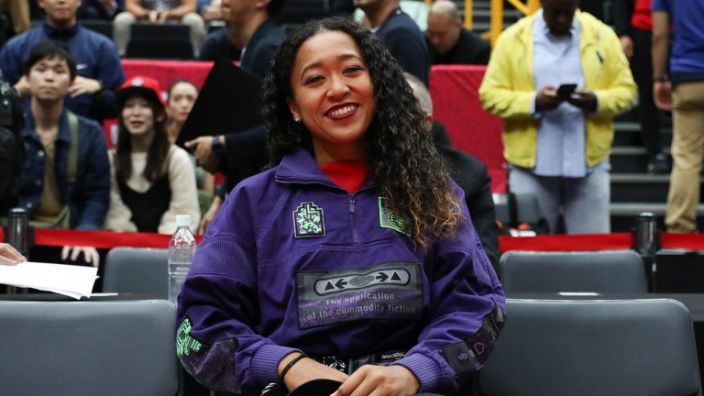 Naomi Osaka has been unveiled as Louis Vuitton’s new brand ambassador, with the French label announcing the partnership alongside colorful pictures from the tennis star’s latest fashion shoot.The three-time Grand Slam winner, who is currently ranked third in the world, will appear in the label’s Spring-Summer 2021 campaign.“Wow this is actually crazy,” the Japanese star wrote on both her Twitter and Instagram accounts. “Honored to be @LouisVuitton newest House Ambassador.“Funny story: I first bought my mom a LV bag when I was 16 as a birthday present and it’s kinda been a tradition since. Do I call this a full circle moment? Yes.”
@Naomi_Osaka_
In a press release, Louis Vuitton described Osaka as “multi-faceted, independent and modern,” and “perfectly incarnating the Louis Vuitton woman.”The label accompanied the announcement with campaign photos taken by artistic director of women’s collections, Nicolas Ghesquière, for his upcoming Spring-Summer 2021 collection. In them, Osaka is seen wearing a boldly colored dress while holding a bag marked with the label’s distinctive monogram.

On Instagram, Ghesquière described Osaka as “an exceptional young woman who represents her generation and is a role model for everyone.

“Her career and convictions are inspiring and I am in awe of Naomi,” he wrote. “She stays true to herself and doesn’t compromise on her values. I am looking forward to sharing new projects with Naomi in the year to come!”

During the US open, Osaka, who is of Haitian and Japanese descent, was widely praised for supporting the Black Lives Matter protests that broke out last summer. In each of her seven matches at the 2020 tournament, she wore face masks displaying the name of a different victim of alleged police or racist violence in the US.

She told reporters at the time: “I’m aware that tennis is watched all over the world, and maybe there is someone that doesn’t know Breonna Taylor’s story. Maybe they’ll like Google it or something.”

The announcement comes shortly after the 23-year-old’s first appearance on the cover of American Vogue. The magazine’s January 2021 issue saw her posing in a slip dress by Louis Vuitton during an outdoor cover shoot with celebrated photographer Annie Leibovitz.

This is just the latest foray into sport for the French label, though its recent sporting partnerships have been in its menswear division. In August, creative director of Louis Vuitton men’s, Virgil Abloh, announced that he was working with skateboarder Lucien Clarke, who designed a skate shoe for the label.

The brand then revealed a collaboration with the NBA that “celebrates the cultural contribution of basketball and its diverse characters.” The resulting capsule collection comprised clothes, bags, shoes and accessories branded with the NBA’s logo.

“Aside from tennis, my most treasured passion is fashion; and there is no brand more iconic than Louis Vuitton,” said Osaka, the reigning champion at the U.S. open, in a press release. “It is such an honour to work with Nicolas – he’s a designer I admire so much and we share a mutual love of Japanese culture and style. To become global brand ambassador is truly a dream come true for me.”

Ghesquière calls Osaka “exceptional” and a role model. “Her career and convictions are inspiring,” he said. “I am in awe of Naomi, she stays true to herself and doesn’t compromise on her values.”

Osaka, the daughter of a Haitian father and Japanese mother, is the first Asian player to hold the No.1 ranking in singles and the first Japanese player to win a Grand Slam (of which she has won a total of three). She competes for Japan, where she was born, and will be the face of the Tokyo 2021 Olympic Games. Osaka currently lives in Los Angeles. 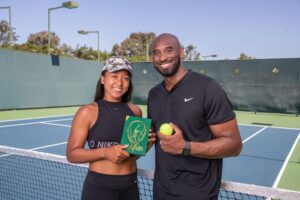 WHO IS NAOMI OSAKA

Naomi Osaka (大坂 なおみ, Ōsaka Naomi, Japanese pronunciation: [o̞ːsäkä näo̞mi], born October 16, 1997) is a Japanese professional tennis player. Osaka has been ranked No. 1 by the Women’s Tennis Association (WTA), and is the first Asian player to hold the top ranking in singles. She is a three-time Grand Slam singles champion, and is the reigning champion at the US Open. Her six WTA titles on the WTA Tour also include two at the Premier Mandatory level. At the 2018 US Open and the 2019 Australian Open, Osaka won her first two Grand Slam singles titles in back-to-back Grand Slam tournaments, and is the first player to achieve this feat since Jennifer Capriati in 2001.

Born in Japan to a Haitian father and a Japanese mother, Osaka has lived and trained in the United States since she was three years old. She came to prominence at the age of sixteen when she defeated former US Open champion Samantha Stosur in her WTA Tour debut at the 2014 Stanford Classic. Two years later, she reached her first WTA final at the 2016 Pan Pacific Open in Japan to enter the top 50 of the WTA rankings. Osaka made her breakthrough into the upper echelon of women’s tennis in 2018 when she won her first WTA title at the Indian Wells Open. Later in the year, she defeated 23-time Grand Slam singles champion Serena Williams in the final of the US Open to become the first Japanese player to win a Grand Slam singles title. From 2018 through 2020, she has won a Grand Slam singles title in three consecutive years.

Osaka is one of the most marketable athletes in the world, building on her status as a Grand Slam singles champion, her multi-ethnic background, and her candid personality. She was the highest-earning female athlete of all time by annual income in 2020, and ranked 8th among all athletes in endorsement income. On the court, Osaka has an aggressive playing style with a powerful serve that can reach 200 kilometres per hour (124 mph). She was included on Time‘s annual list of the 100 most influential people in the world in both 2019 and 2020.

Michael Crabtree Saves The Day, As The Oakland Raiders rally to beat Saints 35-34 in New Orleans, Starts The 2016 Season In The Win Column

THE WORLD CUP OF SOCCER UPDATE: THE USA AND ENGLAND SOCCER MATCH ENDS IN A 1-1 DRAW.