THE MYBOYSAY NATION ENTHUSIAST PERSPECTIVE ON THE 2019 NBA FREE AGENT EXTRAVAGANZA, NOBODY IS TALKING ABOUT ONE OF THE GREATEST POINT GUARDS IN THE HISTORY OF THE NBA, MR DERRICK MARTELL ROSE, AND ALSO MR. CARMELO ANTHONY, ONE OF THE GREATEST SMALL FORWARDS AND PURE SHOOTERS OF ALLTIME.

Free agency opens at 6 p.m. ET, although no contracts can officially be signed until noon on July 6.

The 30-year-old former 2011 MVP, Derrick Rose, could be on his way to Detroit. Of course, Mr. Derrick Rose could start for any team in the NBA, but he deserves to start for a team he can take to the finals. The Los Angeles Clippers comes to mind, also, The Los Angeles Lakers, and a return to The New York Knicks would be a Great Deal, if they are ready to bring in the help he needs to get it done, may we say TOGETHER, KWAHI LEONARD!!!!!! MBS says the THE NEW YORK KNICKS should resign Derrick Rose to a 4YR 60 MILLION DOLLAR CONTRACT, BRING IN THE HELP (KWAHI LEONARD (MAX)-KEVIN DURANT (MAX)-DEMARCUS COUSINS (MAX), CARMELO ANTHONY (2YR 40MIL), AND WIN A FEW NBA TITLES FOR OLD TIMES SAKE.

JAMES DOLAN IS A GREAT BUSINESS MAN, AND HE KNOWS THE TITLES WILL PAY FOR THEMSELVES, AND HIS NEW YORK KNICKS WILL INCREASE THEIR VALUATION BY 50%, PERIOD.

Multiple teams would like to talk to him, but Rose has been on the Pistons’ radar for a while, and now it looks like a deal with get done.

Rose is a score-first point guard, but the Pistons lacked scoring off the bench last season and Rose changes that dynamic. He plays a similar style to starter (for now) Reggie Jackson, so the offense doesn’t change dramatically when he comes in. Detroit needs to move Reggie Jackson to the 6th man position, have Derrick Rose to start, and take the Detroit Pistons to The NBA FINALS, NO DOUBT. Derrick Rose is the man for the job.

Derrick Martell Rose (born October 4, 1988) is an American professional basketball player for the Minnesota Timberwolves of the National Basketball Association (NBA). He played one year of college basketball for the Memphis Tigers before being drafted first overall by his hometown Chicago Bulls in the 2008 NBA draft. After being named the NBA Rookie of the Year, Rose, at age 22, became the youngest player to win the NBA Most Valuable Player Award in 2011.

Derrick Rose, 30, Rose is averaging 19.3 points per game in 29.6 minutes per game, his highest total since his MVP season, and his first full year with the team after signing with Minnesota late in the 2018 season as a free agent following a buyout with Utah. His 2018-19 campaign ended in March with surgery to remove bone chips from his right elbow.

Rose was a member of the United States men’s national basketball teams that won gold medals at the 2010 and 2014 FIBA World Cup.

If those numbers don’t move you, a look at his Synergy page indicates why the Pistons would be interested in him moving forward:

Derrick Rose was basically a great offensive point guard last season, a great pick-and-roll scorer and playmaker; the type of player that would work nicely alongside Andre Drummond, especially. However, he played only 51 games last year due to injuries to his ankle and his elbow. The elbow injury required surgery and knocked him out for the rest of the year in late March. But prior to those injuries, Derrick rose was having an outstanding season, coming off the bench.

Rose accepted a scholarship to play for the University of Memphis Tigers under John Calipari, who recruited him after seeing him play in an AAU game. Strong efforts were made by Indiana University and in-state University of Illinois to sign Rose to their own programs. Illinois in particular planned to pair Rose and their five-star recruit Eric Gordon, who had played AAU basketball with Rose. Gordon, however, retracted his verbal commitment from the Fighting Illini, opting to play for Indiana, and Rose subsequently gave his verbal commitment before the start of his senior season. Rose chose Memphis because of the school’s history of putting players in the NBA and the prospect of Rod Strickland, a 17-year veteran of the league, mentoring him. Rose switched to #23, due to the fact that #25 had been retired by the school in honor of Penny Hardaway.

With the addition of Rose and led by veteran upperclassmen Joey Dorsey and Chris Douglas-Roberts, the Tigers started out the season ranked third in the nation. Memphis sprinted to a 26–0 start and claimed the number one ranking in the country for the first time in over 25 years before falling to the University of Tennessee Volunteers 66–62 in February. Memphis was able to bounce back and capture the Conference USA Tournament to qualify for the “Big Dance” with a 33–1 record. Rose averaged 14.9 points per game, 4.7 assists and 4.5 rebounds per game during the regular season and earned All-American Third Team honors among others. He finished as a finalist for the Bob Cousy Award as well as the John R. Wooden Award.

Memphis was seeded No. 1 in the South Region. Rose earned high praise for his increased focus on defense, hounding Texas Longhorn guard D. J. Augustin into a low-percentage game in the Elite Eight. In a match-up against UCLA in the Final Four, Rose finished with 25 points and 9 rebounds to lead the Tigers to an 85–67 win and a trip to the NCAA championship game against the Kansas Jayhawks. The win set a NCAA mark for most wins in a season (38). Against Kansas, Rose scored 17 points on 7–of–17 shooting, along with six rebounds and seven assists, but missed a critical free throw at the end of the second half as Memphis fell in overtime, 75–68.[44] Memphis concluded the season 38–2. Rose was named to the All-Final Four team after averaging 20.8 points, 6.5 rebounds and 6.0 assists per game.

On April 15, Rose announced he would forgo his final three seasons at Memphis and declared for the 2008 NBA draft.

Rose was selected with the first overall pick in the 2008 draft by the Chicago Bulls. He was selected to the U.S. Select Team to scrimmage against and prepare the National Team for the Olympics in Beijing.

Rose became the first Bulls draftee to score 10 points or more in his first 10 games since Michael Jordan, and earned Eastern Conference Rookie of the Month honors for November and December. During the All-Star Weekend, Rose played in the Rookie Challenge, and won the Skills Challenge, where he beat out several All-Stars to become the first rookie to claim the trophy.  Rose won monthly rookie honors in March. Rose won Rookie of the Year, joining Michael Jordan (1985) and Elton Brand (2000) as the only Bulls to do so. He was also the first number-one draft pick since LeBron James to win the award. He averaged 16.8 points on 47.5% field goal shooting, 6.3 assists (leading all rookies) and 3.9 rebounds per game and was also named to the NBA All-Rookie First Team.

In his playoff debut against the defending champion Boston Celtics, Rose recorded 36 points (tying Kareem Abdul-Jabbar‘s NBA record for points scored by a rookie in his playoff debut, set in 1970), 11 assists, and 4 rebounds as the Bulls prevailed in a 105–103 overtime win on the road. Rose became the second player in NBA history to record 35 points and 10 assists in his playoff debut, after Chris Paul. Rose averaged 19.7 points on 47.5% shooting, 6.3 assists and 4.9 rebounds per game in his first playoff series, as the Bulls were defeated by the Celtics in seven games.

On January 28, 2010, Rose was elected to his first career All-Star Game as a reserve for the Eastern Conference, making him the first Bulls player to be selected since Michael Jordan in 1998.[73] Rose ended up with eight points, four assists and three steals in the game. On April 13, 2010, Rose scored 39 points against the Celtics, making 15–22 field goals and 9–10 free throws. The Bulls once again made the playoffs in the 2009–10 season, finishing with a 41–41 record. In the playoffs Rose averaged 26.8 points and 7.2 assists. 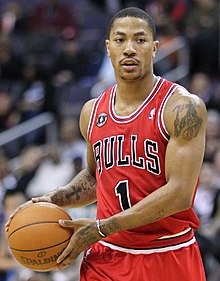 On October 30, 2010, in the Bulls’ second game of the season, Rose scored 39 points in a 101–91 win against the Detroit Pistons. Two days after, Rose contributed 13 assists, helping Luol Deng score a career high 40 points in a win against the Portland Trail Blazers. On December 10, Rose scored 29 points and had 9 assists, leading the Bulls to their first victory over the Los Angeles Lakers since December 19, 2006.

On February 17, in the Bulls’ last game before the All-Star break, Rose set a career-high with 42 points, while also recording 8 assists and 5 rebounds, as the Bulls beat the San Antonio Spurs 109–99. On March 26, Rose had a career high 17 assists, along with 30 points, in a 95–87 victory over the Milwaukee Bucks.

At the end of the 2010–11 NBA season the Bulls finished with a league leading record of 62–20. Their 60+ wins was the Bulls’ first such season since 1997–98 and sixth 60+ win in franchise history. At season’s end, Rose became only the third player since the 1972–73 NBA season to record 2,000 points and 600 assists in a single season. The other two players were LeBron James and Michael Jordan.

In the 2011 NBA Playoffs, the Bulls defeated the Indiana Pacers and Atlanta Hawks in the first two rounds. In the Eastern Conference Finals, the Bulls faced the Miami Heat, led by LeBron James, Dwyane Wade and Chris Bosh. The Bulls lost the series in five games. During the 2011 playoffs, Rose averaged 27.1 points per game, but only shot 39% from the field and 24% for three-pointers.

In December 2011, Rose signed a five-year contract extension with the Bulls for $94.8 million. The contract was 30 percent of the Bulls’ salary cap, the maximum allowed under a rule dubbed the “Derrick Rose Rule” from the 2011 NBA Collective Bargaining Agreement.

Rose signed with the Cleveland Cavaliers.[115] In his debut for the Cavaliers in their season opener against the Boston Celtics on October 17, 2017, Rose scored 14 points in a 102–99 win.

On March 8, 2018, Rose signed with the Minnesota Timberwolves, reuniting him with Tom Thibodeau, Jimmy Butler and Taj Gibson. In the playoffs, Rose averaged 14.2 points in 23.8 minutes per game, as the Timberwolves lost 4–1 to the Houston Rockets in the first round.

On July 4, 2018, Rose re-signed with the Timberwolves for the 2018–19 season. On October 31, in his first start of the season, Rose scored a career-high 50 points in a 128–125 win over the Utah Jazz, securing the victory with a block on Utah’s final shot as time expired. On December 26, he had 24 points and eight assists and received MVP chants in a 119–94 win over the Bulls in Chicago. It was just his second career game in the United Center against his former team. On January 15 against the Philadelphia 76ers, Rose reached 10,000 career points. On January 20, he scored 29 of his 31 points in the second half and hit an 18-footer with 0.6 seconds left to give the Timberwolves a 116–114 victory over the Phoenix Suns.

His agent is former Bulls guard B. J. Armstrong.

Rose is a Christian. Rose has spoken about his faith saying, “… God does everything for a reason.” Rose wears a wristband that says “In Jesus Name I Play” and has several tattoos about his faith.

Rose was the lone cover athlete for the 2K Sports Downloadable Content game, NBA 2K10 Draft Combine, which was released on Xbox Live Arcade for the Xbox 360 and PlayStation Network for the PlayStation 3.

Rose is a part-owner and spokesman for the Chicago-based Giordano’s Pizzeria.

In 2008, Rose signed a shoe deal with Adidas for $1 million per year. He has also signed with Wilson Sporting Goods. Other endorsement deals include Skullcandy headphones, Powerade, Force Factor sports drinks and a suburban Chicago Nissan dealership. In May 2018, it was announced that the Adidas D Rose 9’s would be released in July 2018.

In 2011, Rose was estimated by Crain’s Chicago Business to earn $1.5–$2.5 million annually in endorsements, ranking just outside the top 10 NBA players in that category. In 2012, it was reported that Rose signed a contract extension with Adidas, worth $185 million over 14 years.