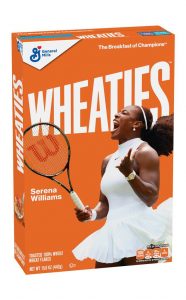 Wheaties announced today that Serena Williams, one of the world’s top and most decorated tennis players, will be the next athlete to adorn the cover of Wheaties iconic orange box.

Serena Williams, one of the world’s top and most decorated tennis players, will be the next athlete to adorn the cover of Wheaties iconic orange box. (Photo: Business Wire)

“Serena exemplifies all of the personal attributes that Wheaties looks for when choosing who its next champion will be,” said Tiffani Daniels, marketing manager for Wheaties. “On the court, she has been named the women’s most valuable player seven times, while off the court she uses her voice to inspire and spark change to make the world a better place.”

Williams has established herself as one of the greatest tennis players of all time. She has earned 23 grand slam singles titles and 14 grand slam doubles titles. Along with her many professional career accomplishments, Williams also represented the United States in Sydney, Beijing, London and Rio and earned four gold medals in both singles and doubles play.

“I am so excited to be on the cover of the next Wheaties box,” Williams said. “I have dreamt of this since I was a young woman and it’s an honor to join the ranks of some of America’s most decorated athletes. I hope my image on this iconic orange box will inspire the next generation of girls and athletes to dream big.”

Outside of tennis, Williams is a tireless advocate for equality. She fearlessly fights for the causes she believes in, with a focus on gender and racial equality. Growing up in one of America’s toughest neighborhoods, Williams learned steadfast resilience and she is working to instill confidence in others. Whether in her tennis career, through her clothing company, as a philanthropist or as a mother, she is focused on helping women to establish their own inherent greatness.

Williams limited-edition Wheaties Box will be widely available nationally in the next several weeks.

Wheaties has been committed to providing athletes with the nutrition they need to help them perform at their best for more than 90 years. The team behind “The Breakfast of Champions” has worked for decades to learn from food scientists, health professionals and athletes about what active people need to help fuel their active lifestyles. Some of the greatest athletes in American history have been honored by this first-ever whole grain breakfast cereal. Wheaties’ 100 percent whole grain flakes have long been enjoyed as part of a complete breakfast. To view a timeline of Wheaties Champions over the decades, visit here. 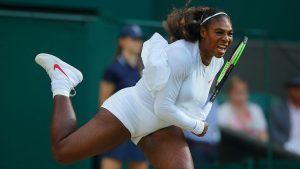 Serena Jameka Williams is an American professional tennis player. The Women’s Tennis Association (WTA) ranked her world No. 1 in singles on eight separate occasions between 2002 and 2017. She reached the No. 1 ranking for the first time on July 8, 2002. On her sixth occasion, she held the ranking for 186 consecutive weeks, tying the record set by Steffi Graf. In total, she has been No. 1 for 319 weeks, which ranks third in the “Open Era” among female players behind Graf and Martina Navratilova.

Williams has won 14 Grand Slam doubles titles, all with her sister Venus, and the pair are unbeaten in Grand Slam doubles finals.  As a team, she and Venus have the third most women’s doubles Grand Slam titles, behind the 18 titles of Natasha Zvereva (14 with Gigi Fernández) and the record 20 titles won by Martina Navratilova and Pam Shriver. Williams is also a five-time winner of the WTA Tour Championships in the singles division.  She has also won four Olympic gold medals, one in women’s singles and three in women’s doubles—an all-time record shared with her sister, Venus. The arrival of the Williams sisters has been credited with ushering in a new era of power and athleticism on the women’s professional tennis tour. She is currently ranked at No. 11 in the world by the WTA.

Earning almost $29 million in prize money and endorsements, Williams was the highest paid female athlete in 2016. She repeated this feat in 2017 when she was the only woman on Forbes‘ list of the 100 highest paid athletes with $27 million in prize money and endorsements. She has won the ‘Laureus Sportswoman of the Year’ award four times (2003, 2010, 2016, 2018), and in December 2015, she was named Sportsperson of the Year by Sports Illustrated magazine.  In 2019, she was ranked 63rd in Forbes’ World’s Highest-Paid Athletes list.

2017 NBA FREE AGENCY IS IN RARE FORM, MEGA CONTRACTS, MEGA TRADE DEALS ARE MIND BLOWING, AND IT’S ONLY THE BEGINNING

BREAKING NBA NEWS:SHAQUILLE O’NEAL, ONE OF THE GREATEST PLAYERS TO GRACE THE FLOORS OF THE NBA , RETIRES.