Hamilton ‘blew everyone away’ – Wolff, Singapore Grand Prix win one of Mercedes’ greatest in F1 – Wolff

After a lap in qualifying that he described as “magic”, Lewis Hamilton managed the Singapore Grand Prix to perfection to score 25 points at a track which Mercedes have openly called their “bogey circuit”. And Hamilton’s Team Principal Toto Wolff was full of admiration for the job his driver had done around the Marina Bay Street Circuit.

Hamilton’s qualifying performance was scintillating, with Wolff calling it “the best lap I have ever seen in a Formula 1 car… it’s a lap that is going to go down in the history books”. In a more straightforward race, Hamilton managed the pace at the front to net his seventh Grand Prix victory of the season, and the second in a row at a track where Mercedes had expected to struggle, after Hamilton’s shock win at the Italian Grand Prix.

“It feels like one of the greatest victories,” said a clearly elated Wolff after the race, “because it was really our bogey circuit in the past and we were so motivated to do well here and to show we could also perform in Singapore.

“We worked so hard after Spa to understand the car, and we knew that, against many voices, we could perform well in Singapore. We came here, qualifying was amazing, the lap was stardust and then he controlled it throughout the whole race.”

Hamilton’s pre-Singapore activities were called into question going into the weekend, with the British driver launching a new fashion collection with Tommy Hilfiger in Shanghai, before flying to New York and then on to Singapore to prepare for the race. And while Hamilton argued that he derived energy from doing other projects and found them “stimulating”, Wolff also defended his driver’s actions.

“Since six years, I’ve heard ‘how can you allow Lewis to get off and fly around the world?’ You know what? He did it to his most extreme in the last 10 days. He loved it. He was in Shanghai on the catwalk, he was in New York a couple of days later, he came here, rock and roll, and he blew everyone away. Let’s be non-judgemental and allow everyone to judge how he performed best. And he knows best what is good for him.”

Hamilton’s victory now moves him 40 points clear of Sebastian Vettel in the drivers’ standings, with just six Grands Prix remaining this year, while Mercedes sit 37 points ahead of Ferrari in the constructors’ standings. But Wolff was clear that, despite their points advantage in both championships, Mercedes wouldn’t be letting up as the season draws towards its climax.

“The great thing is, it’s not maths, it’s motor racing,” he said. “You can see like in Austria, we had a double DNF, how quickly it goes, and you are losing 25 points.

“Anything can happen. I knock on wood it’s not happening to us, but we need to keep performing on that level – and then that championship will go towards us.

“[But] 40 points advantage or zero makes no difference to us.” 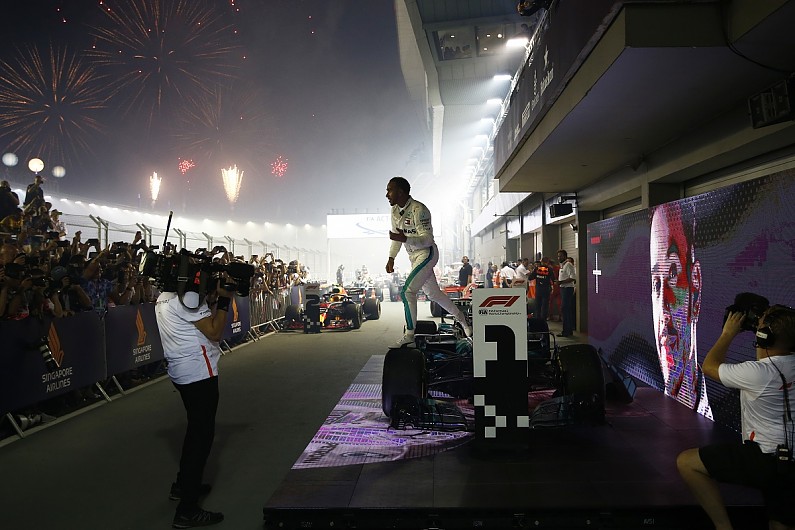 Toto Wolff believes Lewis Hamilton’s Singapore Grand Prix win was one of the “greatest” of the current Mercedes team’s 74 victories in Formula 1.

As well as coming at a venue where Mercedes has struggled relatively in recent years, only winning last season because a first-lap crash wiped out both Ferraris and Max Verstappen’s Red Bull, it also put Hamilton into a 40-point championship lead over Sebastian Vettel.

Wolff said being clearly outpaced by Ferrari in the Belgian GP at the end of August had motivated Mercedes.

”It feels like one of the greatest victories, because it was really our bogey circuit in the past,” said Wolff of the Marina Bay result.

“And we were so motivated to do well here. And we showed that we can also perform in Singapore, and coming here and finishing by winning the race, and with a very solid team result, is really a great achievement for everybody in the team.

“You need to make your own destiny a little bit. We’ve worked so hard after Spa to understand the car, and we knew against many voices that we could perform well in Singapore.

“We came here, and qualifying was amazing, the lap was really stardust, and then he controlled it throughout the whole race.” 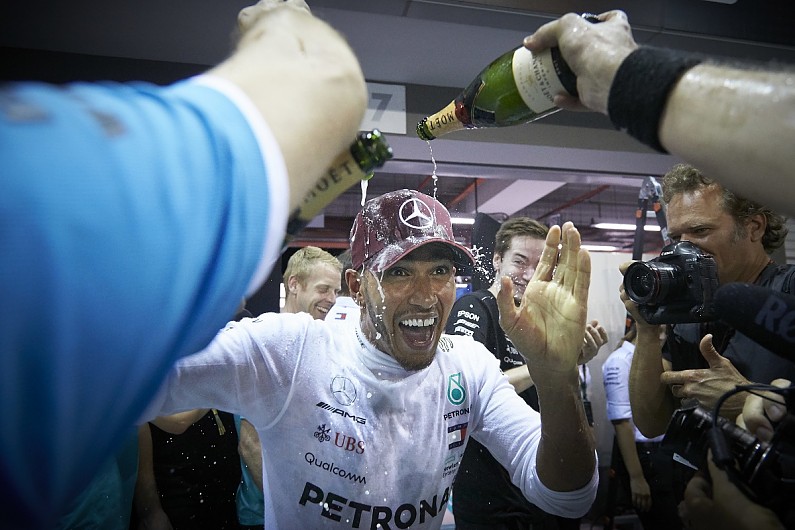 Wolff said there was no specific effort focused on the Singapore track.

“It was just part of the ongoing development, to really try to understand the tyres and the car better, and make it more compact with it all together,” he explained.

“There’s never one silver bullet, it’s tiny little steps that are important to make the car perform like it did.

“There’s marginal gains that will determine the outcome of this championship, because on performance levels we are very close to each other.

“So we have to keep the foot on the throttle and try to avoid mistakes and continue to develop the car.”

But Wolff insisted Mercedes was still far from comfortable in either championship.

“Forty points advantage or zero, makes no difference for us,” he said.

“You can see, like in Austria when we had a double DNF, how quickly it goes, and you lose 25 points.

We just have to look weekend by weekend and try to perform at our best level.

Singapore — In the sweltering heat of the Singapore Grand Prix, Lewis Hamilton turned up the heat on Sebastian Vettel a notch further.
Hamilton won comfortably from pole position on Sunday, extending his Formula One championship lead over Vettel to 40 points.Winning from pole on one of the hardest tracks for overtaking in F1 was nothing special in itself. But Hamilton’s masterclass in qualifying was exceptional as he recorded one of the best pole positions of his career — described as epic within his Mercedes team.It afforded him a more relaxing race than expected — heat aside — given Ferrari’s advantage during practice this weekend.

Especially as Hamilton has no intention of easing up.

The British driver is on a major roll after winning four of the past five races, pinning Vettel firmly on the ropes in their bid for a fifth F1 title.

“I think the approach I have is working really well, so I don’t see the point in changing,” Hamilton said after his seventh win of the season and 69th in F1.

Red Bull driver Max Verstappen was nine seconds back in second place, with Vettel way back in third.

“We didn’t come here expecting to lose 10 points,” said a dejected Vettel, who trailed by 30 heading into Singapore.

Vettel’s championship bid crumbled when he crashed from pole here last year and went on to lose the title by 46 points to Hamilton.

It is looking increasingly like a repeat scenario for the Ferrari driver, who is in disappearing into Hamilton’s slipstream.

Vettel was unhappy with his team after qualifying in third place behind Verstappen, and the German driver sounded irritated during Sunday’s race after a team strategy error to send him into the pits for a tire change before Hamilton failed to work.

Instead he lost position and crucial points, dropping back behind Verstappen having earlier overtaken him.

“We tried to be aggressive in the beginning and obviously it didn’t work out,” Vettel said. “I think today, with the way we raced, we didn’t have a chance. I said before the weekend we can only beat ourselves and today we didn’t get everything out of the package.”

The only thing bothering Hamilton seemed to be the conditions. Despite the night-time start, the temperature was around 30 degrees Celsius (86 Fahrenheit) and the humidity intense.

“I’m spent,” Hamilton said moments after victory, crouching down by his car.

“It’s so hard to overtake here,” Hamilton said. “So positioning is everything.”

Vettel tried to make ground, almost bumping into Verstappen as they headed into the first corner on Sunday. They just avoided contact.

Moments later, Vettel passed Verstappen with a great move on Raffles boulevard while behind them Sergio Perez knocked his Force India teammate Esteban Ocon into the wall and out — bringing a safety car onto the track for four laps.

When the race re-started, Ferrari gambled on pitting first for new tires by bringing in Vettel first. Mercedes pitted Hamilton moments later, and when Vettel came back out he was still behind Hamilton and lost more time getting past Perez.

Verstappen was the next in, almost colliding again with Vettel into turn 3. Verstappen held position, Vettel dropping to third.

“No chance, we are again too late,” Vettel complained over team radio, taking another apparent swipe at team strategy. “If (being aggressive) works it’s great — today it didn’t work by quite a bit.”

Time is running out for Vettel, who realistically has to win in Russia in two weeks’ time if he is to get back into title contention.

THE TEXAS RANGERS ARE BLISTERING THE AMERICAN LEAGUE, WINNING 11 IN A ROW, AND TAKING A 4 GAME LEAD OVER THE LA DODGERS IN THE WEST