Serena Williams’ first children’s book, The Adventures of Qai Qai, will be published in September 2022 First Serena Williams gave her daughter’s doll Qai Qai her own Instagram account. Now, she’s getting her own book!

On Thursday, the tennis star announced that she’s releasing her first children’s book, The Adventures of Qai Qai, with Invisible Universe, an entertainment technology company. The kids’ book is illustrated by Yesenia Moises and will be published by Feiwel and Friends on September 27, 2022.

“Storytime is such an important pillar of our bedtime routine, like so many others around the world,” Williams, 40, said in a statement about reading with her 4-year-old daughter Olympia, whom she shares with husband Alexis Ohanian, 38. (See below for art from the book shared exclusively with PEOPLE.)

“Qai Qai is a special member of our family and we hope The Adventures of Qai Qai will give others a new way to welcome Qai Qai into their own home.” After Williams and Ohanian gave the doll to their young daughter, the two became inseparable. The couple wanted to share Qai Qai’s fun antics with the world by creating her own Instagram account in August 2018, with the help of Invisible Universe, which brought the doll to life.

Since then, Williams and Ohanian have continued to share Olympia’s toy with fans both in-person and on Instagram. (In May, Williams posed with Olympia and Qai Qai in matching pink swimsuits. “When @nike makes a swimsuit for not just @olympiaohanian but @realqaiqai too,” the athlete captioned the photo.) Qai Qai is now an Internet celebrity and a beloved doll for thousands of children,

“I know one thing four years ago that was really important to us was to make sure that Olympia had a Black baby doll,” Ohanian, who teamed up with Adobe and Invisible Universe to create a free coloring book in honor of International Daughters Day, told PEOPLE in September.

“And have that be a very important first doll for her, if for no other reason than to just expose her to something that can hopefully break a cycle that we know exists,” he continued. “The Baby Doll Test has been used as an example for displaying the problems of societal discrimination and how hard-coded that gets into culture.

“Very quickly we started to see this story play out online of people who were just so enamored with this doll and were really excited to hear about the stories and adventures she was going to go on,” the Reddit co-founder added. “I think there’s a lot of people who have resonated with this idea of a really mischievous, and fun, and clever, and brave, and strong little girl doll and I’m excited to see all the places she goes and I do hope it can inspire kids – boys, girls, Black, white – all over the world to just have fun and dream.”

In The Adventures of Qai Qai, the doll teaches a young girl about “the importance of believing in herself.” The book celebrates friendship and the power of imagination. 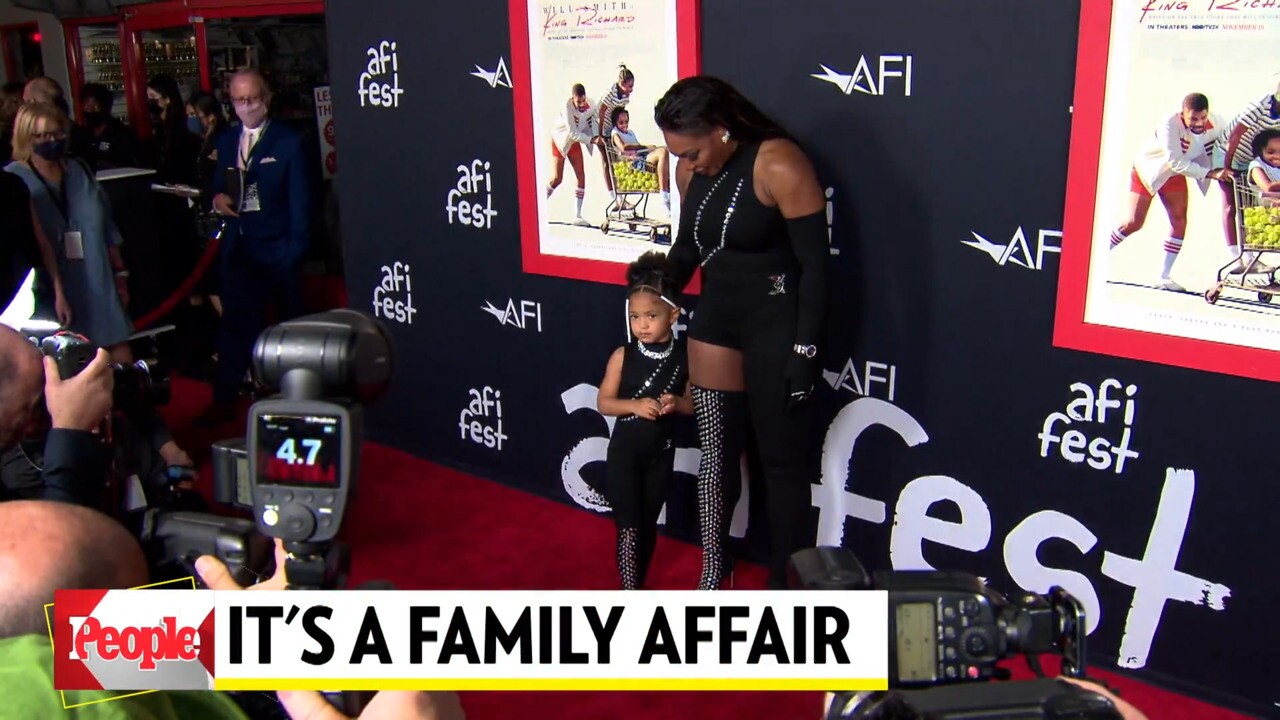 Serena Williams‘s next serve is going to be as a children’s book author.

The tennis superstar is penning her first book aimed at kids, she announced Thursday, with the release of “The Adventures of Qai Qai.”

The tale is based on a doll, Qai Qai, which Williams created for her 4-year-old daughter, Alexis Olympia Ohanian Jr. The character has since garnered a large social media following, boasting more than 3 million fans on Tik Tok.

“Since realizing @RealQaiQai’s ability to spread joy to our own family and also millions of others around the world, we’ve wanted to tell her story in every way possible,” Williams said in an Instagram post. The 40-year-old athlete said the story is about “the power of friendship and imagination.”

A promotional page from “The Adventures of Qai Qai’s” publisher described the project as a “magical picture book in which a little girl learns to believe in herself with the help of her doll and best friend, Qai Qai.”

Fans of Qai Qai, however, will have to wait for her first literary escapade — the book is poised to be released in September 2022.

Serena Jameka Williams (born September 26, 1981) is an American professional tennis player, fashion designer, philanthropist, and movie producer. She has won 23 Grand Slam singles titles, the most by any player in the Open Era, and the second-most of all time behind Margaret Court (24). The Women’s Tennis Association (WTA) ranked her singles world No. 1 on eight separate occasions between 2002 and 2017. On her sixth occasion, she held the ranking for 186 consecutive weeks, tying the record set by Steffi Graf. In total, she has been WTA No. 1 for 319 weeks, which ranks third in the Open Era behind Graf and Martina Navratilova. She is the only American player, male or female, to win more than 20 slams.

Williams has won 14 Grand Slam doubles titles, all with her sister Venus, and the pair are unbeaten in Grand Slam doubles finals. As a team, she and Venus have the third most women’s doubles Grand Slam titles, behind the 18 titles of Natasha Zvereva (14 with Gigi Fernández) and the record 20 titles won by Martina Navratilova and Pam Shriver. She and Venus are the only tennis players in history with four Olympic gold medals, as well as the only ones to win Olympic gold in the same event on three occasions. She and Venus are the only Open Era female tennis players to win Olympic Gold in both the singles and doubles categories. At the 2012 Summer Olympics, Williams became only the third player to win Olympic gold medals in both singles and doubles at one Olympic Games, after Helen Wills Moody at the 1924 Summer Olympics and Venus at the 2000 Sydney Olympics. Williams is the only player, male or female, to accomplish a Career Golden Slam in both singles and doubles. The arrival of the Williams sisters has been credited with ushering in a new era of power and athleticism on the women’s professional tennis tour.

Earning almost $29 million in prize money and endorsements, Williams was the world’s highest-paid female athlete in 2016. She repeated this feat in 2017 when she was the only woman on Forbes‘ list of the 100 highest-paid athletes with $27 million in prize money and endorsements. She has won the ‘Laureus Sportswoman of the Year’ award four times (2003, 2010, 2016, 2018), and in December 2015, she was named Sportsperson of the Year by Sports Illustrated magazine. In 2021, she was ranked 28th on Forbes‘ World’s Highest-Paid Athletes list. In terms of career prize money, she stands as the highest-earning female athlete of all time.

Williams was born on September 26, 1981, in Saginaw, Michigan to Oracene Price and Richard Williams. She is the youngest of Price’s five daughters: half-sisters Yetunde, Lyndrea, and Isha Price, and full older sister Venus. She also has at least seven paternal half-siblings. When the children were young, the family moved to Compton, California, where Williams started playing tennis at the age of four. Her father home schooled Serena and her sister, Venus. While he and subsequently her mother have been the official coaches, other mentors who helped her learn the game included Richard Williams, a Compton man who shared her father’s name and would go on to found The Venus and Serena Williams Tennis/Tutorial Academy. 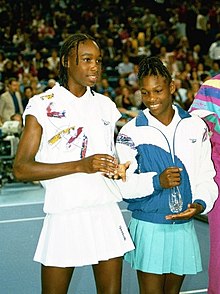 When Williams was nine, she and her family moved from Compton to West Palm Beach, Florida, so that she could attend the tennis academy of Rick Macci; Macci began to provide additional coaching. Macci did not always agree with Williams’s father, but respected that “he treated his daughters like kids, allowed them to be little girls”. Richard stopped sending his daughters to national junior tennis tournaments when Williams was 10 since he wanted them to go slowly and to focus on school work. Experiences of racism also drove this experience, as Richard Williams had heard white parents talk about the Williams sisters in a derogatory manner during tournaments. At that time, Williams had a 46–3 record on the United States Tennis Association junior tour and was ranked number one among under-10 players in Florida. In 1995, when Williams was in the ninth grade, her father pulled his daughters out of Macci’s academy and, from then on, took over all coaching at their home. When asked in 2000 whether having followed the normal path of playing regularly on the junior circuit would have been beneficial, Williams responded: “Everyone does different things. I think for Venus and I, we just attempted a different road, and it worked for us.”

Aliko Dangote has built Africa’s largest fertilizer plant to fill the void created by sanctions against Russia. Nigerian Billionaire is Supplying Fertilizer to the World When Russia Can’t

MANCHESTER UNITED ROUTS THE MLS ALL STARS, 4-0, AS THEIR UNITED STATES TOUR CONTINUES.