The Tokyo Olympics are winding down – literally just a couple days left in Japan – but the competition is far from over.

For starters, Allyson Felix is still the amazing athlete she was before she became a mother. Felix won bronze in the 400-meters, becoming the most-decorated female track and field athlete with 10 career medals. There really is no slowing her down.

She may have one more race to go but American Allyson Felix has already clinched an Olympic sendoff worthy of her astonishing career.She won a record 10th Olympic medal on Friday after finishing third in the 400 metres, becoming the most decorated woman in track and field history as she surpassed Merlene Ottey in the all-time Olympic medal table in her final individual Olympic race.“I’ve just tried to be more vulnerable and be more transparent this time around,” the 35-year-old Felix said after the race. “Being an older athlete I think that’s something we don’t see as much. So I have been sharing some of my own struggles.“I think a lot of times I tied my work to what happens at these championships and I didn’t want to do that this time around.”

Widely expected to contend in Saturday’s 4x400m relay final, Felix would break Carl Lewis’ American medal record if she reaches the podium yet again at her fifth and final Games, a prospect Lewis appeared to welcome.

“Congratulations @allysonfelix,” the retired track and field icon wrote on Twitter. “35 never looked so good. What an amazing career and inspiration. Now on to the relay.”

Shaunae Miller-Uibo of the Bahamas claimed the top of the podium, winning the 400m in 48.36 seconds to retain her Olympic title, but Felix’s achievement perhaps stole the show as she finished in 49.46, her fastest time in the event since 2015.She is only the third track and field athlete to win a medal at five different Games, after starting her Olympic career as a teenager, winning silver in the 200m at Athens 2004.“We can talk about the 10 Olympic medals but I’d rather talk about how this woman has inspired so many people to bet on themselves,” Carmelita Jeter, her team mate on their 2012 gold medal winning 4×100 metre relay team, wrote on Twitter.“She said I’m great and I know it let me show you.”

Tianna Bartoletta, her team mate on both the 2012 and 2016 relay teams, added to the praise.

“I woke up early to witness this. From being afraid of her in high school, to lining up next to her in the Olympics, to running with her on our 4×1 relays,” she wrote on Twitter. “I’m now simply in awe of her. Amazing.”

With six Olympic gold medals and 13 world titles to her name, Felix’s resilience extends far beyond the track: she gave birth to her daughter, Camryn, via an emergency C-section in 2018 after medical complications required the baby to be born at 32 weeks.

She said the “biggest thing” for her this year was not winning more medals but making the comeback at all.

“Sometimes it sounds like a cliche, but it honestly is more than just me running out there,” said Felix.

“Earlier today I looked through some of the videos again of things that we had taped when I was in hospital with Cammie, and on the comeback trail – those really, really hard moments – and that’s what I tried to tap into.”

Felix has won five additional Olympic gold medals as a member of the United States’ women’s relay teams: three at 4 × 400 meters (2008–2016), and two at 4 x 100 meters (2012 and 2016). The 2012 U.S. Olympic 4 x 100 meters team also set the women’s 4×100 meters world-record that still stands. Felix is the only female track and field athlete to ever win six Olympic gold medals, and is the most decorated female Olympian in track and field history, with a total of ten Olympic medals. Felix is also the most decorated athlete, male or female, in World Athletics Championships history with 18 career medals, and also has the most gold medals at 13.

Felix’s 200 meters best of 21.69 secs from 2012 ranks her seventh on the all-time list. In 2013, she broke the world best for the rarely contested 150 meters distance, running 16.36 secs. In the 4 × 400 metres relay at the 2015 World Championships, she ran the fastest split ever recorded by an American woman, and third fastest split ever after Jarmila Kratochvilova and Marita Koch, with 47.72. Felix is also a four time Diamond League winner. She is a participant in the US Anti-Doping Agency‘s “Project Believe” program.[5] She is coached by Bobby Kersee.

Allyson Felix is included in Time magazine’s 100 Most Influential People of 2020.

Allyson Felix was born on November 18, 1985, in Los Angeles, California. She is the daughter of Paul, an ordained minister and professor of New Testament at The Master’s Seminary in Sun Valley, California, and Marlean, an elementary school teacher at Balboa Magnet Elementary. Her older brother Wes Felix is also a sprinter. He runs the 200 m, was the USA Junior Champion in 2002 and the Pac-10 champion in 2003 and 2004 while running for USC. Wes now acts as the agent for his sister. Felix describes her running ability as a gift from God, “For me, my faith is the reason I run. I definitely feel I have this amazing gift that God has blessed me with, and it’s all about using it to the best of my ability.”

Allyson Felix attended Los Angeles Baptist High School in North Hills, California, where she was nicknamed “Chicken Legs” by her teammates, because the five-foot-six, 125-pound sprinter’s body had skinny legs despite her strength. Her slightness was seemingly at odds with her speed on the track and strength in the gym as while still in high school, she deadlifted at least 270 pounds. Felix credits much of her early success to her high school sprint coach, Jonathan Patton.

Felix began to discover her athletic talents after she tried out for track in the ninth grade. Just ten weeks after that first tryout, she finished seventh in the 200 m at the CIF California State Meet. In the coming seasons, she became a five-time winner at the meet. In 2001, at the Debrecan World Youth Championships, Felix achieved her first international title in the 100 meters. In 2003, she was named the national girls’ “High School Athlete of the Year” by Track and Field News.  As a senior, Felix finished second in the 200 m at the US Indoor Track & Field Championships. A few months later, in front of 50,000 fans in Mexico City, she ran 22.11 seconds, the fastest in history for a high school girl (though it could not count as a world junior record because there was no drug testing at the meet).

Felix graduated in 2003, making headlines by forgoing college eligibility to sign a professional contract with Adidas. Adidas paid her an undisclosed sum and picked up her college tuition at the University of Southern California.  She has since graduated with a degree in elementary education. 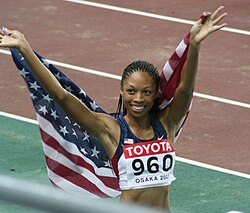 Felix celebrating her victory in Osaka 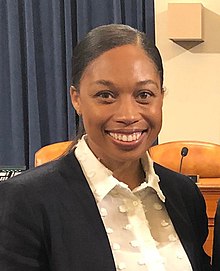 Felix after speaking on Capitol Hill in 2019

In November 2014, Felix traveled to Brazil as a Sports Diplomacy Sports Envoy for the U.S. Department of State. In this function, she worked with Josh George to conduct clinics, speeches and other events for 510 youth, many of whom had disabilities or came from marginalized communities. The program was designed to remove barriers and create activities that benefit audiences with and without disabilities, whilst speaking with a young, at-risk public about important life and sports values, such as respect, discipline and overcoming adversity. 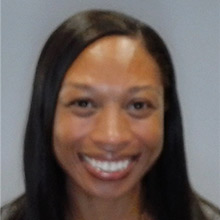 THE NEW YORK KNICKS HAVE PULLED OFF THE BLOCKBUSTER TRADE, THEY NOW HAVE MR. CARMELO ANTHONY

THE WORLD OF GOLF SMILES, IT’S A FOUR SHOT VICTORY, AS ” TIGER WOODS ” WINS THE FARMERS INSURANCE OPEN AT TORREY PINES, HIS FIRST 2013 PGA GOLF TOUR START OF THE YEAR

BOXING SENSATION, “ERROL SPENCE”, OF THE USA, WINS HIS WELTERWEIGHT BOUT, ELEVATING TO THE QUARTER-FINALS ROUND

RE-VISITING PRO FOOTBALL IN THE YEAR OF 1974, AS “BEAUMONT TEXAS” IS RECOGNIZED AS THE FOOTBALL CAPITAL OF THE WORLD BY ABC’S WIDE WORLD OF SPORTS, AND HOWARD COSELL AS IT’S SPOKESMAN. AT THAT POINT IN TIME, THE CITY OF BEAUMONT TEXAS HAD PRODUCED MORE NFL PLAYERS THAN ANY OTHER CITY IN THE WORLD.