“Jameis Winston”, THE GREATEST PURE PASSER SINCE HIS ARRIVAL IN THE PRESENT DAY NATIONAL FOOTBALL LEAGUE, PERIOD………………IF HIS RECEIVERS WOULD HAVE COMPLETED THEIR ROUTES, RAN THEIR ROUTES CORRECTLY, AND KEPT RUNNING TO DAYLIGHT, HIS TOUCHDOWN TOTALS WOULD HAVE INCREASED BY 40%, AND HIS INTERCEPTIONS WOULD HAVE BEEN DOWN BY AT LEAST, 40%.

AND GUESS WHAT? HE ACCOMPLISHED HIS NUMBERS WITH RECEIVERS THAT WOULD HAVE BE SECOND, THIRD AND 4TH OPTIONS ON MOST SQUADS, PERIOD………….

IF SEAN PAYTON IS HONEST WITH HIMSELF, AND TRULY WANTS TO WIN, HE WILL PUT THIS YOUNG MAN IN THE BEST POSITION TO WIN, AND WITH THAT SAID, IF GIVEN THE TOOLS, JAMEIS WINSTON WILL TAKE THE NEW ORLEANS SAINTS TO THE SUPER BOWL, AND WIN IT.

GET THE MAN A FRONT LINE, OPEN THE OFFENSE UP WITH SOME DECENT RECEIVERS, AND THE SAINTS ARE WINNERS OF THE 2022 NFL SUPER BOWL, THAT’S A FACT.

Jameis Lanaed Winston is an American football quarterback for the New Orleans Saints of the National Football League (NFL). Born and raised in Alabama, he was a highly regarded quarterback in high school and led his team to the state championship as a junior. Winston played college football for the Florida State Seminoles and as a redshirt freshman became the youngest player to win the Heisman Trophy and helped lead the Seminoles to a victory in the 2014 BCS National Championship Game. In his sophomore and final year, the Seminoles advanced to the Rose Bowl, part of the College Football Playoff. Winston also played on Florida State’s baseball team. Winston was drafted as the first overall pick by the Tampa Bay Buccaneers in the 2015 NFL Draft.

After throwing an interception that was returned for a touchdown on his first career pass, Winston set franchise rookie records in several categories, including passing touchdowns, and became just the third rookie in NFL history to throw for over 4,000 yards. Over the next four seasons he continued to set career highs and franchise records, and in 2019 led the league in passing yards, completions, and attempts. 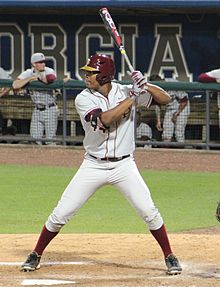 Winston chose Florida State in part because he was allowed to play for the Florida State Seminoles baseball team in addition to football. A switch-hitting batter and a right-handed thrower, he played as an outfielder and a pitcher as a freshman in 2013. He batted .235 with a .723 on-base plus slugging in 119 at-bats and had a 3.00 earned run average in 27 innings pitched. Prior to the 2014 season, Winston was named a preseason All-American by Baseball America as a 3rd-team utility player.

Winston was born in Bessemer, Alabama on January 6, 1994.  He attended Hueytown High School, where he played both football and baseball.  Winston was considered the best dual-threat quarterback recruit in the nation by Rivals.com, and the best overall quarterback recruit by ESPN.  Winston was also named the MVP of the ESPN RISE Elite 11 quarterback camp.  Additionally, Winston earned the Gatorade Player of the Year recognition for the state of Alabama. He led Hueytown to a state championship during his junior year.

Winston committed to attend Florida State University on February 3, 2012. The Texas Rangers selected Winston in the 15th round of the 2012 Major League Baseball Draft out of high school. Though the Rangers proposed allowing him to play for the Florida State Seminoles football team while working out with their baseball organization, Winston decided not to sign.

NATALIE HINDS, MULTI-TIME ALL AMERICAN SWIMMER, SPECIALIZNG IN THE 100 FREESTYLE

The First Three Black Priests To Lead Society Of St. Joseph Of The Sacred Heart

THE NBA HAS LOCKED OUT IT’S PLAYERS, DAVID STERN HAS MADE GOOD ON HIS PROMISE, WILL THE NBA HAVE A SEASON THIS FALL?