PEBBLE BEACH, CALIF – On April 16, Pebble Beach Company unveiled an exciting enhancement to its famed golf portfolio. The Hay, located on the site of the former Peter Hay Golf Course, features a dramatically re-designed nine-hole short course, the Resort’s first-ever putting course, and a new restaurant with an expansive outdoor patio positioned to take in the property’s majestic views of the short course, Carmel Bay and Point Lobos. Created in partnership with golf legend Tiger Woods and his TGR Design firm, The Hay is designed to attract and engage golfers of all abilities and ages.

The Hay carries forward the legacy of its original creator, Peter Hay, long-time Head Professional at both Pebble Beach and Del Monte golf courses. Among Hay’s many attributes was a passion for introducing newcomers, particularly juniors, to the game. In 1957, he was given the unique opportunity to develop one of the country’s first short courses on this precious land. That legacy will continue as juniors age 12 and under will play the short course for free, and all golfers will have access to the putting course for no cost.

Woods has amplified Hay’s vision for the property in a way few could have imagined, having re-routed the short course holes to maximize the magnificent views and celebrate Pebble Beach’s rich history. Every detail lends itself to a fun and unforgettable golf experience for families, beginners, juniors, corporate groups, and avid golfers alike. Among its noteworthy features:

The course will open for individual play and group events beginning April 16 with reservations available now. For more information and rates, view the website, or to book, call 866-214-8180.

The logo for The Hay was inspired by the story of Peter Hay serving as Chief Marshal for Bobby Jones during the 1929 U.S. Amateur at Pebble Beach, the first national golf championship contested west of the Mississippi River.

During the opening round, the crowd following Jones began running between shots to catch a glimpse of the superstar. Hay restored order to the gallery with his unmistakable presence and assertive commands that were said to have “shaken the sea lions.” His efforts were appreciated by Jones, who later referred to Hay as the world’s greatest golf marshal.
The visual inspiration for the logo came from a 1938 photo of a trained sea lion during a promotional shoot at Del Monte, where Hay was the head pro from 1919 to 1942.

Established in 2006, the mission of TGR Design is to utilize Tiger’s worldwide experience, his limitless pursuit of excellence and his love of golf to create a unique collection of amazing golf courses around the world. Tiger believes that every project should be special and provide an outstanding golf experience. As a result, TGR Design seeks to find the best sites, select the best partners and create fantastic course designs. A cornerstone of every project, the TGR Design team works closely with each client to provide exceptional, customized service. Complementing this selective approach are the company’s design goals. Tiger Woods is famous for setting a high standard and working hard to surpass it. TGR Design is no different. Every project incorporates Tiger’s highest standards, personal vision and passion for golf as well as his international experience in the game. 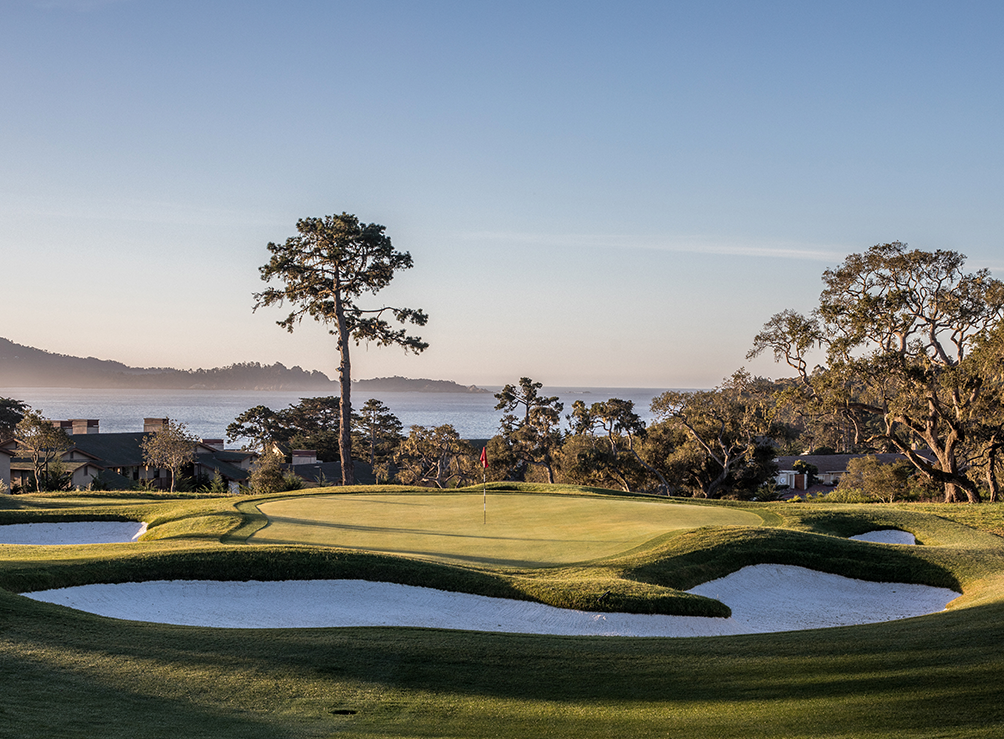 The Hay at Pebble Beach is located on the former site of the historic Peter Hay Golf Course, which was entirely reimagined by TGR Design to offer an updated, world-class golf experience appealing to golfers of all ages and abilities. Peter Hay was a long-time Head Golf Professional at Pebble Beach.

Tiger and TGR Design have amplified Peter Hay’s vision for the property in a way few could have imagined, having re-routed the short course holes to maximize the magnificent views and celebrate Pebble Beach’s rich history. Set just steps away from the storied Pebble Beach Golf Links, the new short course was designed for pure enjoyment with a focus on creating a community-like environment where all golfers will be able to have fun and feel comfortable.

The only short course on the Monterey Peninsula, The Hay’s layout seeks to introduce new players to the game while also providing a relaxed environment for skilled players to hone their game or enjoy another round after playing one of Pebble Beach’s other outstanding golf offerings. It features a dramatically re-designed nine-hole short course and the Resort’s first-ever putting course. Some noteworthy features of The Hay include the 2nd hole, which is an exact replica of Pebble Beach Golf Links’ iconic 7th hole. Each of the other eight holes’ yardage corresponds to a significant year in Pebble Beach history, with plaques on each tee telling the story.

The Hay Short Course at Pebble Beach is Fun, Fast and a Blueprint For The rest Of The Country

After a complete reimagining of the site by Tiger Woods, The Hay opened last Friday. The new layout is bold and honors the history of Pebble Beach.

Pebble Beach has announced the opening date of its new short course, reimagined by Tiger Woods and his design team. The Hay — replacing the old Peter Hay course — is set to open April 16.

On April 16, Pebble Beach will open The Hay, a 9-hole short course located just up the road from its famous neighbor Pebble Beach Golf Links — and just 16 months after the project was announced.

THIS IS USAIN BOLT, THE FASTEST MAN ON THE PLANET TAKE A LOOK AT THIS MAN’S ACCOMPLISHMENTS!!!

KOBE BRYANT HEATS UP THE USA MENS BASKETBALL TEAM AS THEY WIN, 119-86, TO STAY DEFEATED IN THE 2012 MENS OLYMPIC BASKETBALL GAMES