Michael Jordan will present Kobe Bryant as he is inducted into the Naismith Basketball Hall of Fame on May 15.

The Hall of Fame announced presenters for the 2020 inductees Thursday, which include David Robinson presenting Tim Duncan and Isiah Thomas presenting Kevin Garnett.

Michael Jordan will present Kobe Bryant in the 2020 Naismith Hall of Fame @Hoophall induction ceremony on May 15. Full list of inductees and presenters: pic.twitter.com/iD5r6EIxHF

Bryant, Duncan and Garnett lead one of the strongest classes of Hall of Famers ever. Jordan and Bryant have had an inescapable relationship and off-court kinship, given Kobe’s modeling of his game after His Airness and many viewing Bryant as the rightful heir to Jordan’s basketball throne.

“Kobe was my dear friend; he was like a little brother,” Jordan said in February 2020. “When Kobe died, a little piece of me died. …This kid had passion like you would never know. As I got to know him, I wanted to be the best big brother that I could be.”

Bryant made an appearance in ESPN’s The Last Dance documentary and credited Jordan with helping him early in his career.

“It was a rough couple years for me coming into the league, ‘cause at the time the league was so much older, it’s not as young as it is today. So nobody was really thinking much of me, I was a kid that shot a bunch of air balls, you know what I mean? And at that point, Michael provided a lot of guidance for me. Like I had a question about shooting this turnaround shot, so I asked him about it. He gave me a great, detailed answer but on top of that, he said, ‘If you ever need anything, give me a call.’ That’s like my big brother.”

CHICAGO, UNITED STATES: Los Angeles Lakers guard Kobe Bryant(L) and Chicago Bulls guard Michael Jordan(R) talk during a free-throw attempt during the fourth quarter 17 December at the United Center in Chicago. Bryant, who is 19 and bypassed college basketball to play in the NBA, scored a team-high 33 points off the bench, and Jordan scored a team-high 36 points. The Bulls defeated the Lakers 104-83.

On Thursday afternoon, it was announced who would be presenting the late, great Kobe Bryant for his induction into the Naismith Hall of Fame.

Kobe Bryant with family and friends during a ceremony to retire both the numbers he wore as a Los Angeles Laker at the Staples Center in Los Angeles, Monday, Dec. 18, 2017.

He’ll be presented by none other than the legendary Michael Jordan. Bryant and Jordan shared an incredible relationship, with the former calling Jordan a “big brother” after he entered the league in 1997.

Jordan remarked that people would be surprised to learn how close he was to the former Lakers great.

“If you just watched them interact in a game, Kobe always was like a magnet going toward Michael,” West said. “Usually Michael didn’t really interact with a lot of players when he was on the court. He’d just play. But for some reason, he had this affinity for him.”

Jordan gave a tearful speech at Bryant’s funeral. Now he’ll get the chance to immortalize Kobe forever as part of the 2020 Naismith Hall of Fame class at the ceremony on May 15.

The late Kobe Bryant will be presented by Hall of Famer Michael Jordan at the upcoming ceremony in May. 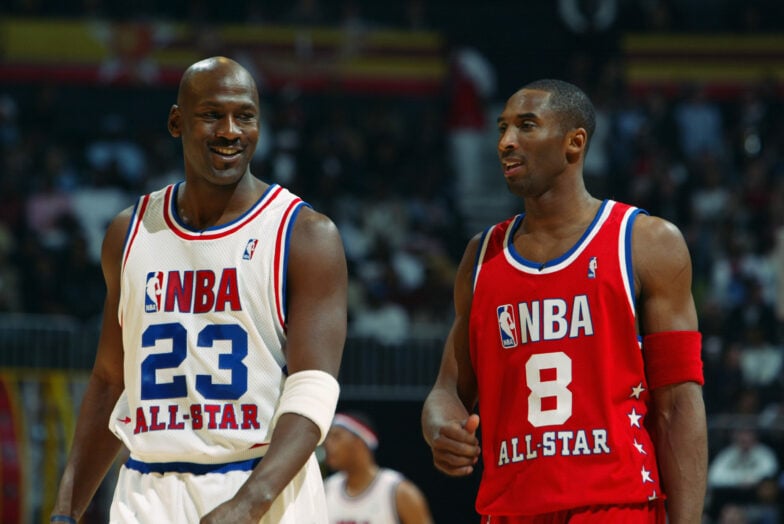 Michael Jordan is among the legendary presenters who will welcome the Class of 2020 into the Hall of Fame.

Springfield, Mass. – The Naismith Memorial Basketball Hall of Fame announced today the list of Hall of Famers scheduled to present the Class of 2020 at the Enshrinement Ceremony to be held Saturday, May 15 at Mohegan Sun Arena. More than 50 Hall of Famers are expected to be in attendance for the ceremony, including all presenters.

Members of the Naismith Memorial Basketball Hall of Fame Class of 2020 were asked to select previous inductees to accompany and present them to their peers. The choice is solely the decision of the incoming Hall of Famers, or their family members if recognized posthumously.

The 2020 Hall of Fame Inductees and Presenters:

LOS ANGELES – OCTOBER 27: Kobe Bryant #24 of the Los Angeles Lakers shows off his 2009 NBA Championship ring before the season opener against the Los Angeles Clippers at Staples Center on October 27, 2009 in Los Angeles, California. NOTE TO USER: User expressly acknowledges and agrees that, by downloading and/or using this Photograph, user is consenting to the terms and conditions of the Getty Images License Agreement.

Kobe Bean Bryant (/ˈkoʊbiː/KOH-bee; August 23, 1978 – January 26, 2020) was an American professional basketball player. A shooting guard, he spent his entire 20-year career with the Los Angeles Lakers in the National Basketball Association (NBA). Regarded as one of the greatest players of all time, Bryant helped the Lakers win five NBA championships, and was an 18-time All-Star, a 15-time member of the All-NBA Team, a 12-time member of the All-Defensive Team, the 2008 NBA Most Valuable Player (MVP), and a two-time NBA Finals MVP. Bryant also led the NBA in scoring twice, and ranks fourth on the league’s all-time regular season scoring and all-time postseason scoring lists.

Born in Philadelphia and partly raised in Italy, Bryant was recognized as the top high-school basketball player in the U.S. while at Lower Merion High School in Pennsylvania. The son of former NBA player Joe Bryant, he declared for the 1996 NBA draft after graduation, and was selected by the Charlotte Hornets with the 13th overall pick; the Hornets then traded him to the Lakers. As a rookie, Bryant earned a reputation as a high-flyer and a fan favorite by winning the 1997 Slam Dunk Contest, and he was named an All-Star by his second season.

After the Lakers lost the 2004 NBA Finals, O’Neal was traded and Bryant became the cornerstone of the Lakers. He led the NBA in scoring during the 2005–06 and 2006–07 seasons. In 2006, he scored a career-high 81 points; the second most points scored in a single game in league history, behind Wilt Chamberlain’s 100-point game in 1962. Bryant led the team to two consecutive championships in 2009 and 2010, and was named NBA Finals MVP on both occasions. He continued to be among the top players in the league through 2013, when he suffered a torn Achilles tendon at age 34. He subsequently suffered season-ending injuries to his knee and shoulder, respectively, in the following two seasons. Bryant retired after the 2015–16 season.

Bryant is the all-time leading scorer in Lakers franchise history. He was also the first guard in NBA history to play at least 20 seasons. His 18 All-Star designations are the second most all time, while it is the record for most consecutive appearances as a starter. Bryant’s four All-Star Game MVP Awards are tied with Bob Pettit for the most in NBA history. He gave himself the nickname “Black Mamba” in the mid-2000s, and the epithet became widely adopted by the general public. At the 2008 and 2012 Summer Olympics, he won two gold medals as a member of the U.S. national team. In 2018, he won the Academy Award for Best Animated Short Film for his 2017 film Dear Basketball.

Bryant died at age 41, along with his 13-year-old daughter Gianna and seven others, in a helicopter crash in Calabasas, California in 2020. A number of tributes and memorials were subsequently issued, including renaming the All-Star Game MVP Award in his honor.

THE ALABAMA CRIMSON TIDE DOMINATES THE BCS CHAMPIONSHIP GAME VS THE FIGHTING IRISH, WINS IT ALL, 42-14