17-game NFL season clears the path for Jerry Jones, Cowboys to host another Super Bowl, and The World’s Most Valuable Sports Empires 2021 valuations enjoy a year of opulence

The Cowboys are interested in hosting a Super Bowl again, something they haven’t done since early 2011.

NFL owners voted Tuesday to expand the regular season from 16 to 17 games, a landmark shift that, beyond the obvious impact on the Cowboys’ 2021 schedule, removes a hoop through which the Cowboys needed to jump in order to host their next Super Bowl in Arlington.

The league generally schedules a slate of international games each year in hopes to grow interest in the NFL across the world. Most team owners, however, are reluctant to sacrifice a game in their home stadium to support the initiative.

In 2014, the NFL enacted a policy to improve club participation in the International Series. Any franchise that won a Super Bowl hosting bid became required to play at least one home game in London within five years of the bid’s acceptance.

The Cowboys are interested in hosting a Super Bowl again. They haven’t done so since Feb. 6, 2011, and their earliest plausible opportunity for the event’s return is February 2027. But if he can avoid it, owner Jerry Jones would prefer not to export a home game from AT&T Stadium in the process.

Now, he can avoid it.

“That provision was included to really get the original International Series off the ground and making sure that there was inventory,” said Chris Halpin, NFL executive vice president and chief strategy and growth officer. “It was an element in return for getting a Super Bowl, there would be a game abroad. The reality is now that we’ve committed long-term inventory and volunteer teams like the Jaguars, who are going to continue to have a long-term commitment to London …we don’t require that Super Bowl commitment to inventory.”

Jones is not off the hook entirely.

No NFL owner is.

In 2021, the Cowboys will travel to play the New England Patriots.

A trip to the Patriots’ Gillette Stadium makes a difficult Cowboys road schedule even tougher.

Aside from the NFC East, Dallas already was scheduled to play the Tampa Bay Buccaneers, Kansas City Chiefs, New Orleans Saints, Los Angeles Chargers and Minnesota Vikings on the road. The Bucs and Chiefs competed in last month’s Super Bowl.

At home, the Cowboys will play the NFC East, Atlanta Falcons, Carolina Panthers, Denver Broncos, Las Vegas Raiders and Arizona Cardinals in 2021. The schedule of dates and times won’t be finalized until later this spring.

With the expanded regular season, the standard preseason was shortened from four to three games.

But this year, the Cowboys will play four. One will be the Hall of Fame Game on Aug. 5 against the Pittsburgh Steelers in Canton, Ohio. Then, they’ll play their customary three exhibitions.

Each NFC team in 2021 will play two preseason games at home and one on the road.

Each AFC team, because of the extra home game during the regular season, will play one exhibition at home and two on the road.

That, too, will alternate each year. 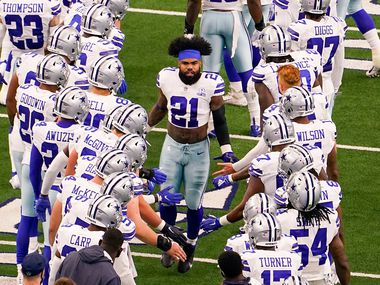 The World’s Most Valuable Sports Empires 2021

Former Staff
SportsMoney
I write about the business of sports.

The richest sports portfolios are underpinned by their teams and enhanced by their media, gambling, esports, auto racing, hospitality and mixed martial arts businesses.

The NFL playoffs kick off this Saturday, and the New England Patriots will be watching the action on television. The squad has reached the Super Bowl nine times since 2000, the rookie year for quarterback Tom Brady, and taken home the trophy in six of those visits. But Brady is leading the Tampa Bay Buccaneers in the postseason this year while the Patriots delivered their first losing season in two decades.

The setback has not hurt the fortunes of Pats owner Robert Kraft, whose well-timed investments in non-NFL assets—as well as the enduring profits of football franchises—have delivered a winning year for the billionaire.

Forbes pegs the enterprise value (equity plus net debt) of the Kraft family’s sports holdings at $5.3 billion, up $800 million from last year. The jump is the largest among sports owners and lands the group at No. 7 on the 2020 list of the World’s Most Valuable Sports Empires, up from eighth last year.

The value of the Patriots increased by 7% in Forbes’ 2020 NFL team valuations, adding $300 million to the Kraft empire. The coronavirus dented revenue in 2020, as it did for every NFL team, but the league’s profit machine is expected to resume in 2021. Starting in 2023, the NFL will be armed with a new round of TV deals worth perhaps $15 billion a year, double the current average.

Timely investments in sports betting company DraftKings and gaming platform Skillz have a combined value of more than $400 million. DraftKings went public in April via a special purpose acquisition company, or SPAC, and shares have tripled since then. The Kraft family also owns the New England Revolution (MLS), Kraft Analytics Group (sports data analytics) and Boston Uprising (esports franchise), as well as a small piece of UFC. Talent agency giant Endeavor paid $4 billion for the mixed-martial-arts promotion in 2016, and its current enterprise value is $9.4 billion.

The 20 most valuable sports empires have a combined enterprise value of more than $100 billion, led by Liberty Media at No. 1 with $13 billion. Controlled by billionaire John Malone, Liberty owns MLB’s Atlanta Braves, Formula One and small pieces of the Drone Racing League and Denver’s Ball Arena. Liberty is ranked for the first time after a change to the methodology from last year’s inaugural list to include passive owners, as well as those who also manage their teams. The change also ranks the Paul G. Allen Trust (Seattle Seahawks, Portland Trail Blazers and a minority stake in the Seattle Sounders) for the first time, landing at No. 9 with $5 billion.

The 20 most valuable sports empires have a combined enterprise value of more than $100 billion, led by Liberty Media at No. 1 with $13 billion.

Kroenke Sports & Entertainment, which houses the wide-ranging sports assets of Stan Kroenke, follows Liberty at No. 2 with $8.7 billion. The Dallas Cowboys empire built by Jerry Jones is third at $7 billion.

The values of top-tier sports assets, particularly teams, have held up extremely well during the pandemic. The New York Mets ($2.4 billion) and the Utah Jazz ($1.66 billion) both sold for rich valuations over the last six months while the Minnesota Timberwolves are on the market and attracting interest. Investors believe that revenue for major team sports will continue to climb in the years ahead as fans come back to stadiums and the value of media rights increases.

In addition to the Red Sox, who increased in value by 3% from a year ago, FSG owns Premier League soccer club Liverpool, half of Nascar’s Fenway Roush Racing, 80% of regional sports network NESN and sponsorship business Fenway Sports Management. FSG ranks as the fourth-largest sports empire at $6.6 billion, flat from a year ago. While the baseball team rose in value, Fenway Roush and NESN both fell.

The World’s Most Valuable Sports Empires 2021

To compile our scorecard of the most valuable sports empires, we screened our database of the most valuable teams from the NFL, MLB, the NBA, the NHL and soccer for people or companies whose holdings in these teams were above $2 billion. We use enterprise values, which reflect the cost of acquiring a business including debt. This diverges from Forbes’ net worth estimates for individuals, which are net of debt. Only those with a majority interest in at least one team were eligible. Thus, you won’t find Michael Rubin or Fanatics on our list, despite his minority ownership in teams and the company’s dominance in sports apparel merchandise.

Misremembered Wins Big Cap At Santa Anita, Get Ready Racing Nation, The Horse Racing Season Is In Full Form, And MyBoySay Will Be On Top Of It All.

THE NLCS FEATURES, THE CARDINALS VS THE BREWERS, THE PHILLIES AND THE DIAMONDBACKS ARE ON VACATION