Candace Parker officially signs with the Chicago Sky — making THE WNBA FRANCHISE an instant favorite for the WNBA title: ‘Nobody IN THE HISTORY OF THE WNBA has ever signed a free agent like this’

As Chicago Sky coach James Wade conducted exit meetings with each of his players after the 2020 WNBA season, he noticed a theme in their answers about what it would take to get the team to the next level.

The Sky had made the playoffs for the second consecutive year but got stuck in another single-elimination game, ending in a first-round exit. Wade, who is also the team’s general manager, heard his players talk about wanting to add a player with experience, someone who knew how to win and what extra intangibles it takes to go from playoff team to championship contender.

It was the kind of player that sounded a lot like Candace Parker.

So Wade went all-in with his pursuit of Parker during free agency. He flew to Atlanta for an in-person pitch, letting her know she was the Sky’s top priority.

It all led to Monday, when the Sky officially announced Parker will play in Chicago next season in a news release calling the deal “one of the biggest free-agent moves in the history of the WNBA.”

Parker, 34, grew up in Naperville and was named Ms. Basketball in Illinois three times at Naperville Central before becoming the No. 1 pick in the 2008 WNBA draft. She played her first 13 seasons with the Los Angeles Sparks, winning the MVP award twice and Finals MVP in 2016.

“Chicago is where my family raised me; where I first learned the game of basketball; and where I first fell in love with this orange ball,” Parker said in a statement. “I am excited to continue the next chapter of my career where it all began. To my new teammates, my new organization, and my new fans: I’m home.”

During a phone interview with the Tribune, Wade did not mince words when discussing the significance of the signing. He believes Parker can be the missing piece to lead the Sky to the next level.

“The fact that she’s a leader, Finals MVP, (league) MVP, all these things, the fact that she’s won on every level consistently. Every team doesn’t have that. Really nobody has ever signed a free agent like this. For us to be the team that has the biggest free-agency signing in league history is special. It means that our players are doing something right, our organization is doing something right.”

Parker instantly transforms the Sky into one of the favorites to win the WNBA championship next season. She will join a loaded starting lineup that includes Courtney Vandersloot, Allie Quigley and Diamond DeShields. The Sky also have a strong group of promising young players such as Azura Stevens, Gabby Williams and Kahleah Copper.

Adding the 2020 Defensive Player of the Year in Parker should be a perfect fit. After injuries derailed her 2019 season, Parker was back to her old form in her 13th season, averaging 14.7 points, 9.7 rebounds and 4.6 assists while shooting 51% from the field to finish third in MVP voting.

“The majority of people that are not from this area, they know she was a big star in high school, they know she was as big as they come, but they didn’t experience it,” Wade said. “To actually be here in Chicago and to go through what Chicagoans have been through since Michael Jordan stepped away … since the injuries to Derrick Rose, to actually have this happen to women’s basketball here, a place that’s been a great hotbed for women’s talent, to have your biggest star come back home and say, ‘I’m going to try to lead you to the promised land’ — it’s something special.

“We are aware that she’s going to make us a much better team. We expect for her to come in and just be herself and do everything that she’s done over the 13 years that she’s been in the league. We know that she’s going to be really good in a Sky uniform. We just expect great things. And we’re excited as anyone because it says a lot about our organization that she would choose us.”

6 things to know about new Chicago Sky star Candace Parker, including her Tennessee volleyball offer and basketball running in the family

The Chicago Sky made a big splash Wednesday when they reportedly reached an agreement with two-time WNBA MVP Candace Parker. Parker is one of the greatest players of her generation, and the signing marks a homecoming for the former Naperville Central star.

Her career stats have been impressive, but so have her accolades at every level.

In high school, she won two Class AA state titles with Naperville Central. She then chose to play for Pat Summitt at Tennessee, where she was SEC Player of the Year, Naismith Player of the Year and a two-time NCAA champion.

The Sparks selected Parker with the the No. 1 overall pick in the 2008 WNBA draft and won two league MVP awards s and a championship in 2016.

Now, Parker hopes to bring a championship to the Windy City. The Sky already have three former All-Stars on the roster — Diamond DeShields, Courtney Vandersloot and Allie Quigley — so adding Parker into the mix should make the Sky a championship contender.

Here are six things to know about Parker.

1. Candace Parker was a 3-time Ms. Basketball of Illinois.

Parker established herself as a future star as a sophomore at Naperville Central. She averaged 22 points, 15 rebounds, 3.8 steals and 3.4 blocks per game and narrowly won Ms. Basketball of Illinois in 2002. She is believed to be the first to dunk in an Illinois girls high school game.

She edged out Lake Zurich senior Johanna Solverson by 23 points in voting, becoming the second sophomore in the then-17-year history of the award to win it. The other? Tamika Catchings. 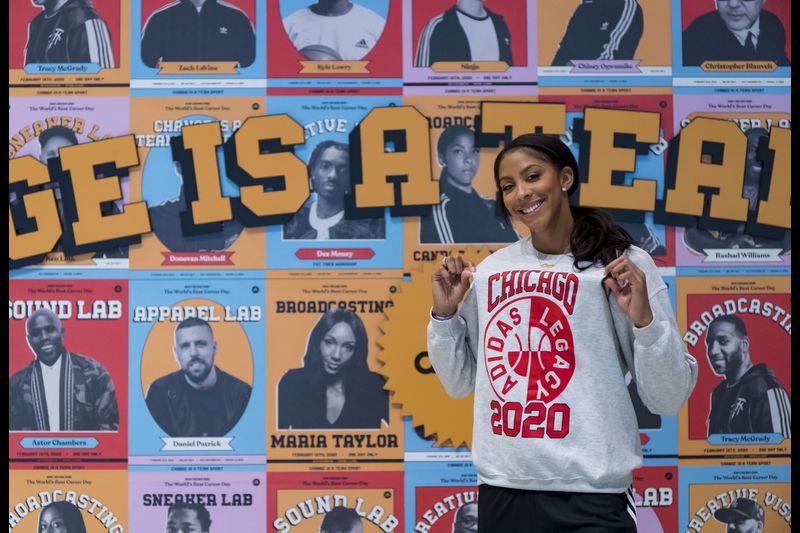 Photos of Candace Parker, who is set to join her hometown Chicago Sky. Parker grew up in Naperville

The next two years of voting weren’t close — her margin of victory in 2003 was 281 points and in 2004 was 906 points. She joined Cappie Pondexter as the only girls to win back-to-back Ms. Basketball of Illinois awards and became the first to win it three times in 2004.

“Parker often has been compared to LeBron James, the phenomenal 6-foot-8 prep standout from Akron, Ohio, who was the Naismith boys winner and is expected to be the No. 1 selection in this year’s NBA Draft,” the Tribune said of Parker in 2003.

2. Parker’s first offer from Tennessee wasn’t for basketball — it was for volleyball.

Basketball wasn’t the only sport Parker was good at. She received a letter in the mail from Tennessee in high school and was elated.

“I saw the Tennessee Lady Vol(unteers) symbol and I was like, ‘Yes, Pat Summitt, she finally recognized me,’ ” Parker said in an interview with NBA 2KTV.

Parker ran around her house, showed her parents and opened the letter — only to find it was a volleyball scholarship, not a basketball one.

Eventually, she did get the basketball letter she coveted. For Parker’s part, she said still plays beach volleyball.q

3. Parker is an NBA analyst on TNT and co-hosts a podcast.

In 2018, Parker added another title to her basketball resume: television analyst. She agreed to a multiyear deal with Turner Sports that made her a commentator on NBA TV, NBA on TNT and NCAA Tournament coverage.

“I’m so excited to be returning to Turner Sports to work alongside the best teammates in the world,” Parker said in 2019 after signing an extension with Turner.

She and Kristen Ledlow co-host a podcast called “Ledlow & Parker.” They have spoken with a variety of basketball minds, including Damian Lillard, Cheryl Miller, Sue Bird and Grant Hill.

4. She shares an ownership stake in Angel City FC, an NWSL expansion team in Los Angeles, with her daughter.

Angel City FC was founded in July 2020 and is set to begin competing in the National Women’s Soccer League in 2022. Parker and her daughter, Lailaa, join a star-studded lineup of owners in the team.

Actress Natalie Portman led the majority ownership group, but the list of current and former athletes is extensive: Serena Williams, Billie Jean King, Mia Hamm, Abby Wambach, Lindsey Vonn, P.K. Subban and others own a piece of the team.

“Lailaa and I are pumped!” Parker posted on Instagram in October. “Baby girl, you can do and be anything you want to be! Keep dreaming and Mommy’s right here with you! #MommyDaughterBusinessPartners”

5. Basketball talent runs in her family.

Candace isn’t the only Parker who found success on the court. Her parents met at Iowa — where her dad, Larry, played basketball and her mom, Sara, was a cheerleader.

Her two older brothers also played basketball — Marcus played in high school and Anthony went on to play at Bradley before making the jump to the NBA.

Anthony Parker’s career wasn’t defined by his nine seasons in the NBA but instead his five years withMaccabi Tel Aviv. There, he won five Israeli championships and National Cups, three European titles and two EuroLeague MVPs. He is now the general manager of the Lakeland Magic, the G League affiliate of the Orlando Magic.

6. Parker has two dogs — one of whom plays pretty decent defense.

During the COVID-19 shutdown, Parker still practiced her basketball skills — against her dog. The video of her playing with her dog Nahla, who plays pretty good defense, went viral.

“Nahla is going for the DPOTYD (Defensive Player of the Year Dog) she said check up,” Parker wrote in her Instagram post.

Parker also had a dog named Fendi that died in 2015, and she has partnered with PETA on anti-fur campaigns.

WHO IS CANDACE PARKER

Candace Nicole Parker (born April 19, 1986) is an American professional basketball player for the Chicago Sky of the Women’s National Basketball Association (WNBA). She was the first overall pick in the 2008 WNBA Draft. In 2016, along with other stars such as Alana Beard and Nneka Ogwumike, Parker helped the Sparks to win their first WNBA Finals title since 2002. In high school, Parker won the 2003 and 2004 Gatorade National Girls Basketball Player of the Year awards, becoming just the second junior and the only woman to receive the award twice.

A versatile player, Parker mainly plays the forward position. In college she was listed on Tennessee’s roster as a forward, center and guard. Parker was the first woman to dunk in an NCAA tournament game and the first woman to dunk twice in a college game. She set both milestones as a redshirt freshman on March 19, 2006. Parker became the second player to dunk in a WNBA game on June 22, 2008. Prior to her first WNBA game, Parker had signed long-term endorsement deals with Adidas and Gatorade. In leading the Lady Vols to two consecutive national championships, Parker was named the Final Four’s most outstanding player in both occasions, and was a two-time consensus national player of the year.

THE MYBOYSAY BASKETBALL SPORTS NATION CONGRATULATES CANDACE PARKER ON HER NEW JOURNEY, AND WE WISH YOU GREAT HEALTH AND SUCCESS!!!!!!

THE WORLD CUP OF SOCCER UPDATE: THE USA AND ENGLAND SOCCER MATCH ENDS IN A 1-1 DRAW.

Rashard Lewis SUSPENDED For The First Ten Games. WHAT?