Lewis Hamilton secured his seventh world title, With victory at the Turkish Grand Prix, And Lewis Hamilton has also joined Michael Schumacher as the most successful driver in Formula One’s history 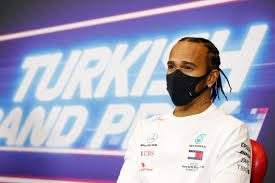 Lewis Hamilton equalled Michael Schumacher’s record of seven world championships on Sunday by winning the Turkish Grand Prix and said afterwards that he hoped his success as a black man in an almost exclusively white sport would act as inspiration to children everywhere.

An emotional Hamilton, who remains the sport’s only black driver, went on to describe what a hard journey it had been to become the most successful driver in the history of Formula One. “It has been so tough. Tough doesn’t even describe how hard it has been,” he said. “When I was younger I didn’t have anybody in the sport that looked like me, so it was easy to think that it was not a possibility. You don’t see any black people on TV in F1 one so hopefully this sends a message to the kids that are watching. 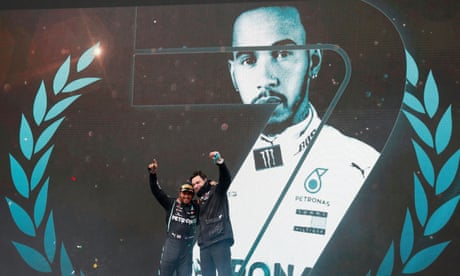 “They can see that it doesn’t matter where you come from, or your background. Where you don’t see someone of the same background or ethnicity or religion as you, then create your own path.” Hamilton has been at the forefront of the anti-racism cause this season and said he would try to ensure his success made a difference.

“I promise you I am not going to stop fighting for change,” he wrote on Instagram. With F1 expected to race in Azerbaijan, Bahrain and now also Saudi Arabia next season Hamilton suggested he was going to hold the sport more accountable for the regimes of the countries it visited. “We realise we’ve got to face and not ignore the human rights issues in the countries that we go to, not just 20 years, 30 years from now, but now,” he said.

In doing so, he wrote his name alongside Michael Schumacher in Formula One’s record books as the most successful driver of all time, but speaking afterwards it was clear that this title represented more than that to Hamilton.

Aware of his position in sporting history, Hamilton has used his platform to advocate change in the world this year. He has made his voice heard on subjects from racial injustice, to diversity and the environment.

After winning in Turkey, Hamilton took to social media to sum up his thoughts.

“Leading up to today, and even after I crossed the line, I’ve been gathering my thoughts about what’s most important to me,” he wrote on his Instagram feed after the race.

“This year has been so unpredictable. With the pandemic and obviously the season being pushed back by several months, I had the most downtime I’ve ever had in my life. It gave me the chance to really think about my ultimate purpose. Seven World Championships means the world to me, I can’t even describe how much, but there’s still another race we’ve yet to win.

“Equaling Michael Schumacher’s record puts a spotlight on me that I know won’t be here forever. So, while you’re here, paying attention, I want to ask everyone to do their part in helping to create a more equal world. Let’s be more accepting and kinder to each other. Let’s make it so that opportunity is not something that is dependent on background or skin colour.

“Nothing is impossible. A driving force for me this year has been to set an example for the next generation, to never give up on your dreams. I was told by many that my dream was impossible, yet here I am. I want you to know that you can do it too. Never give up, keep fighting, and let’s keep rising to the occasion.”

Hamilton has already started to back up his words with actions. Earlier this year, he set up a commission of experts to help understand why Black people are underrepresented in British motorsport and, ultimately, come up with ways to change that fact.

Ahead of the season he took part in peaceful protests over racial injustice in London and persuaded Mercedes to paint its cars black instead of the brand’s traditional silver.

And as Hamilton has made his stand, the sport has followed with its own statements and commitments. Both F1 and his Mercedes team have taken a stronger stance on improving diversity and committed to themselves to bring about real change.

They may have done the same without Hamilton, but he has done more than any other individual in F1 to keep the message alive. And now Hamilton hopes his seventh world title, which in other circumstances may have only inspired those who follow the sport, can be its own message for change in people’s lives.

“It’s obviously no secret that I’ve really walked this sport alone as the only Black person here,” he said on Sunday. “It’s a really interesting point, the fact is I’m bi-racial. I’m bi-racial and I think this colour isn’t [what] people should read about.

“But I think that hopefully shows when I was younger, I didn’t have anybody in the sport that looked like me. So it was easy to think that it’s not possible to be there, because nobody of your colour has been there, you don’t see any Black people on TV that are in F1.

“I think hopefully this sends a message to the kids that are watching, hopefully they see the performance today and hopefully they can see that it doesn’t matter where you come from. Whatever your background, it’s just so important to dream big.

“If you are looking at places and industries and you don’t see someone of the same background or ethnicity as you or the same religion, create your own path. That’s what we did, that’s what I’ve been able to do and it’s been so tough.

“Tough doesn’t even describe how hard it’s been. But I hope that that sends the message, that’s the most important message for kids — to dream as big as possible and not give up.”

Lewis Carl Davidson Hamilton MBE HonFREng, is a British racing driver currently competing in Formula One for the Mercedes-AMG Petronas Formula One Team, having previously driven for McLaren. The most successful driver in the history of the sport, Hamilton’s seven World Championship titles is an all-time record (tied with Michael Schumacher), while he holds the outright records for the most wins (94), pole positions (97), podium finishes (163), points finishes (227), career points (3738) and points in a season (413). Hamilton is widely regarded as one of the greatest drivers in the history of the sport, and has been declared by some journalists, experts and fellow drivers as the greatest of all time.

THE BOSTON CELTICS ARE OUT, MIAMI TAKES THE SERIES, 4-1

LaMarcus Aldridge, five time All-NBA and seven-time NBA All-Star, agrees to a contract buyout for 75.84% of his annual compensation, with the Spurs

BREAKING NEWS FROM THE SPORT OF TENNIS: SERENA WILLIAMS HAS EMERGENCY SURGERY