Cori ‘Coco’ Gauff Continues Sensational Wimbledon DOMINANCE AT 15YRS OF AGE, AND HER ‘Proud’ FATHER Corey Gauff hopes Coco will rise to the challenge of Simona Halep, BUT LOVES HER FOR ALL THAT SHE’S ACCOMPLISHED 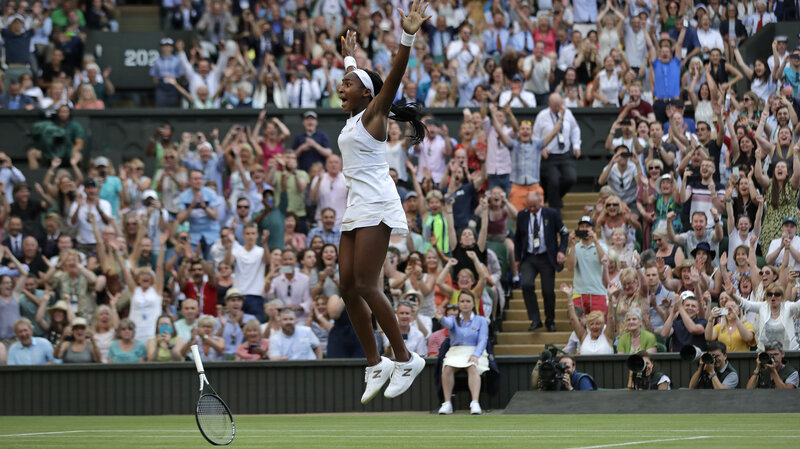 Watching the fearless shot-making and preternatural assurance of 15-year-old Cori “Coco” Gauff at Wimbledon last week, many of us found it irresistible to reminisce on what we were doing at the same age. Most of these reflections – a few of which have been collected under a hashtag: #mylifeatfifteen – offer some variant of drinking our bodyweight in Bacardi, copiously vomiting and then passing out.

The teenage experience of Gauff, who on Mondayplays former world No 1 Simona Halep in the fourth round, has a very different vibe. “You can kind of fake it until you make it, but I’m not faking it, at least right now,” she said last week, a week in which the American made her grand-slam debut, beat her hero and inspiration Venus Williams and became the most exciting new force in tennis for years, maybe decades.

The emergence of Gauff has been the story of Wimbledon 2019. She arrived here as a curiosity: the youngest qualifier in the tournament’s history and the first 15-year-old to compete in the main draw for a decade. The day before her first qualifying match, she was up until 11pm, not – as the Australian maverick.

Coco Gauff’s father and coach, Corey, has disclosed that the family keep on having to extend their hotel booking in Wimbledon. Originally only booked into their hotel for the week of the qualifying tournament, Gauff’s family then extended their stay for the first week of the main draw, and now they have asked the front desk if they can have their rooms for a while longer.

“We’re staying in a hotel and we keep on having to extend our stay, but that’s great,” he said ahead of his 15-year-old daughter’s fourth-round match against Romania’s Simona Halep on Monday. “First we were just booked for a week, and then we extended that for another week, and then we’re having to extend that. Coco wanted to get to the second week and she really wants to win the tournament.”

Far from being overwhelmed by her new fame, Gauff is “enjoying the moment”, according to her father. “A lot has happened fast, she has played a lot of matches, and got a lot of attention. It’s been great for her,” he said. “And the juniors are here now for the junior events so she gets to see some of her friends.”

In the space of a week, Coco has beaten her idol, Venus Williams, in the first round, and saved two match points in her third round win over Polona Hercog to become the youngest female player in the last 16 since Jennifer Capriati in 1991. But when they are back at the hotel after a day’s competition or practice, the family do not speak much about the tennis.

Gauff was down a set and two separate match points in her third-round match against Polona Hercog of Slovenia on Friday, but she came back to win 3-6, 7-6 (9-7), 7-5.

In a press conference after the match, Gauff said she knew she could win, even when she was down 2-5 in the second set.

Gauff, the youngest woman to qualify for Wimbledon in the modern era, is playing the most high-profile matches of her career. She committed 43 unforced errors in Friday’s match against Hercog, but she had just 18 unforced errors in her first two matches combined.

“I wasn’t really tired,” Gauff said after the match against Hercog, which lasted two hours and 47 minutes. “I’m young. I have a lot of energy, and I’m used to playing two matches a day [in the junior tennis circuit].”

Cori “Coco” Gauff (born March 13, 2004) is an American tennis player. She is a former world No. 1 junior, having won one junior Grand Slam singles title and another in doubles. She also finished runner-up in the girls’ singles event at the 2017 US Open, which made her the youngest finalist at the event in the tournament’s history.

Born to athletic parents with NCAA Division I collegiate backgrounds in basketball and track and field, Gauff experimented with a variety of sports as a child. She chose to focus on tennis, having been inspired to play by the Williams sisters and because of her preference to compete in an individual sport. Gauff had quick success as a junior, winning the Little Mo eight-and-under nationals and earning a sponsorship to train at Patrick Mouratoglou‘s academy in France. She began playing on the ITF Junior Circuit at 13 and reached the final at the junior US Open in just her fourth ITF event. She won two junior Grand Slam tournament titles, one in singles at the 2018 French Open and one in doubles at the 2018 US Open.

Gauff made her WTA Tour debut in March 2019 at the Miami Open and won her opening round match. She received a wild card into the qualifying draw at Wimbledon and became the youngest player to qualify for the main draw in the tournament’s history. She then rose to prominence by upsetting her idol Venus Williams in the first round.

Cori Gauff was born on March 13, 2004 to Corey and Candi Gauff, both of whom are from Delray Beach, Florida. Her father played college basketball at Georgia State University, and later worked as a health care executive. Her mother was a track and field athlete at Florida State University, and worked as an educator. Gauff grew up in Atlanta, and first became interested in tennis at the age of four after watching Serena Williams win the 2009 Australian Open on television with her family. Her parents encouraged her to try a wide variety of sports including basketball and track. She began playing tennis at the age of seven and decided she wanted to pursue it as a career because it was an individual sport and because of her early success in winning the “Little Mo” eight-and-under nationals at the age of eight. She said, “I wasn’t much of a team person. I loved tennis. I was so-so about it in the beginning because when I was younger I didn’t want to practice at all. I just wanted to play with my friends. When I turned eight, that was when I played ‘Little Mo’ and after that I decided to do that for the rest of my life.”

When Gauff was around nine years old, her family moved back to Delray Beach so that she would have better opportunities to train in tennis. They initially lived with her mother’s parents before getting their own house. While in Florida, she worked with Gerard Loglo at the New Generation Tennis Academy for a few years. Both of Gauff’s parents gave up their careers to focus on training their daughter, with her father later taking over as her primary coach and her mother overseeing her homeschooling. Her father had limited experience playing tennis growing up. In early 2014 when Gauff was ten years old, she also began to train at the Mouratoglou Academy in France that is run by Patrick Mouratoglou, Serena Williams’s longtime coach. Mouratoglou commented, “I’ll always remember the first time I saw Coco. She came over to the Mouratoglou Academy in 2014 to try out and she impressed me with her determination, athleticism and fighting spirit… When she looks at you and tells you she will be number one you can only believe it.” He helped sponsor Gauff through his Champ’Seed foundation, which he created to provide funding for talented junior tennis players who did not have the financial resources to afford high-level training. Gauff continued to have success, winning the USTA Clay Court National 12-and-under title at the age of 10 years and 3 months old to become the youngest champion in the tournament’s history.

Gauff is a former world No. 1 junior. She began playing on the ITF Junior Circuit at the age of 13, skipping directly to the highest-level Grade A and Grade 1 tournaments. She finished runner-up to Jaimee Fourlis in her third career event, the Grade 1 Prince George’s County Junior Tennis Championships in Maryland. At her next event, Gauff made her junior Grand Slam debut at the 2017 US Open and again finished runner-up, losing to Amanda Anisimova. She did not drop a set before the final in either tournament. Gauff also became the youngest girls’ singles finalist in US Open history.[12] After beginning 2018 with a semifinal at the Grade 1 Traralgon Junior International in Australia, Gauff lost her opening round match at the Australian Open. She did not enter another tournament in singles until French Open, where she won her first career junior Grand Slam tournament title. She did not drop a set until the final, where she came from behind to defeat compatriot Caty McNally in three sets. With the title, Gauff became the fifth youngest girls’ singles champion in French Open history. A month later following another final win against McNally at the Grade 1 Junior International Roehampton, she also became the No. 1 junior in the world.

Gauff reached the quarterfinals in singles at each of the last two Grand Slam tournaments of the year. She fared better in doubles at both tournaments, reaching the semifinals at Wimbledon with partner María Lourdes Carlé and winning her first junior Grand Slam doubles title at the US Open with McNally as her partner. Gauff and McNally defeated compatriots Hailey Baptiste and Dalayna Hewitt in the final, and won all of their matches in straight sets. In September, Gauff represented the United States at the Junior Fed Cup with Alexa Noel and Connie Ma. The team reached the final against Ukraine. After Gauff won her singles rubber and Noel lost hers, Gauff and Noel won the Junior Fed Cup by defeating Lyubov Kostenko and Dasha Lopatetskaya in the decisive doubles rubber that ended 11–9 in a match tiebreak. Gauff finished the year with another Grade A title in singles at the Orange Bowl. She ended the season ranked No. 2 in the world behind Clara Burel.

Trinity Rodman, Bulls legend Dennis Rodman’s daughter, who Was the No. 1 recruit in the country in 2020, enters the National Women’s Soccer League Draft