Kyler Murray, No. 1 overall pick, 2019 Heisman Trophy Winner, signs a four-year contract with Cardinals, deal is worth about $35 million

The Cardinals rookies arrived Thursday, and already more than half the draft class are signed to their contracts – including No. 1 overall pick Kyler Murray.

“Everything I dreamed of,” Murray said. “For me, being in Arizona and being a Cardinal, I can honestly say there is no place I’d rather be. It brings a smile to my face knowing I’ll get the opportunity of a lifetime to quarterback this team. I just have to work toward that and earn that.”The total deal is worth approximately $16.4 million more that the best offer the Athletics reportedly made to Murray to play baseball. Murray, who had already agreed to a $4.6 million signing bonus with Oakland after being the No. 9 pick in the MLB draft, was offered a contract worth $14 million guaranteed. He would also have been added to the team’s 40-man roster.

Murray’s contract comes with it a fifth-year team option for the 2023 season. His salary cap number was set at $6.39 million with a signing bonus of $23.59 million, figures that were locked in by the collective bargaining agreement.

“This is just the beginning,” Murray said. “I plan to work as hard as I can, lead this team to a lot of wins and, hopefully, a lot of rings.”The Cardinals picked Murray, the Heisman Trophy-winning quarterback from Oklahoma, No. 1 overall in the NFL draft and traded quarterback Josh Rosen, their first-round pick from last year, to the Dolphins.

Murray accounted for more than 5,300 yards and 53 touchdowns for Oklahoma this past season.

Murray and the rest of the draft picks will take the field for the first time Friday, when the Cardinals open a rookie minicamp.

Arizona moved up to No. 10 overall in last year’s NFL draft to select Josh Rosen, who had an up-and-down rookie season under first-year coach Steve Wilks.

The Cardinals fired Wilks and replaced him with Kliff Kingsbury, expecting the former Texas Tech coach to replicate some of the offensive successes he had in Lubbock.

The Red Raiders were among the nation’s highest-scoring teams under Kingsbury and he had two quarterbacks, Case Keenum and Patrick Mahomes, who led the nation in passing.

Instead of addressing other needs, the Cardinals used the No. 1 overall pick to take Murray, the Heisman Trophy-winning quarterback from Oklahoma they believe to be a perfect fit for Kingsbury’s “Air Raid” offense..

Murray will likely be the starter for the 2019 season opener after Rosen was traded to Miami for the 62nd overall pick — used on Massachusetts receiver Andy Isabella — and a 2020 fifth-rounder.

Kyler Cole Murray (born August 7, 1997) is an American football quarterback for the Arizona Cardinals of the National Football League (NFL). He previously played college football for the Texas A&M Aggies and Oklahoma Sooners. He also played as an outfielder for the Oklahoma Sooners baseball team. He was the 2014 Gatorade Football Player of the Year as a senior in high school, and 2018 Associated Press Player of the Year as a college senior at Oklahoma. Murray was the recipient of the 2018 Heisman Trophy.

The Oakland Athletics selected Murray with the ninth overall selection in the 2018 MLB draft. Following his Heisman Trophy-winning 2018 season at Oklahoma, he declared his intentions to enter the 2019 NFL Draft. He was selected first overall by the Cardinals.

Murray was born in Bedford, Texas, to Kevin Murray and Misun Henderson.  He attended Allen High School in Allen, Texas. As a senior in 2014, he was the Gatorade Football Player of the Year.  His team won three straight state championships and 43 games in a row. He missed one start during this streak and finished his career with a perfect 42–0 record as a starting quarterback.

Murray was ranked by ESPN, Scout.com, and 247Sports as a five-star recruit and the best dual-threat quarterback in his class. In May 2014, he committed to Texas A&M University to play college football and college baseball.  He officially signed with them on February 4, 2015.

As a true freshman in 2015, Murray competed with Kyle Allen before the season for the starting quarterback position. Allen won the job, with Murray appearing in games as a backup (primarily on plays involving the wildcat formation). After the team lost two straight games in October, the competition was opened again prior to the South Carolina game, and Murray won the starting quarterback position. In his first start, Murray threw for 223 yards and rushed for 156 yards with a passing touchdown and a rushing touchdown, making him and Cam Newton the only Southeastern Conference quarterbacks in the past 20 years to gain over 100 yards passing and rushing, including a passing touchdown and a rushing touchdown in their first career start. On December 24, 2015, Murray announced that he was transferring to the University of Oklahoma. Per NCAA transfer rules, he had to miss the 2016 season. 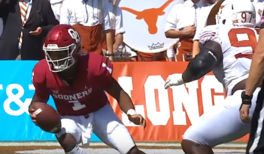 In the 2017 season, Murray was a backup quarterback to Baker Mayfield. He got the opportunity to play in some games in relief of Mayfield. He made his season debut in the season opener against UTEP. In the 56–7 victory, he came into the game in the second half and finished 10-of-11 for 149 yards and a touchdown. Two weeks later, against Tulane, he hit all three pass attempts for 103 yards and a touchdown. On November 25, against West Virginia, he started the game after Mayfield had to sit out some of the game due to disciplinary actions in the previous game against the Kansas Jayhawks. In the game, he hit both pass attempts for 52 total yards and a touchdown while contributing 80 rushing yards on three carries.

Without Mayfield, Oklahoma considered Murray and Austin Kendall to start at quarterback in 2018. Murray was chosen as the starting quarterback. He threw for more than 4,000 yards and 40 touchdowns in the 2018 regular season. In December 2018, Murray was awarded the Heisman Trophy as the best collegiate football player in the country, giving Oklahoma back-to-back Heisman winners. Murray helped lead Oklahoma to a Big 12 Championship and an appearance in the College Football Playoff. In the 2018 Orange Bowl, against Alabama, he had 308 passing yards and two passing touchdowns as the Sooners fell by a score of 45–34.

Murray opted out of the MLB draft after deciding to attend Texas A&M. He was initially set to play as an infielder for the Texas A&M Aggies baseball team in the 2016 season until he announced his departure from Texas A&M on December 17, 2015.

Despite Murray’s reported intention to continue his football career, the Oakland Athletics selected Murray with the ninth overall selection of the 2018 MLB draft. He signed a contract with the Athletics which includes a $4.66 million signing bonus. Prior to his junior year with the football team, Murray said that he would report to spring training in 2019 to begin his professional baseball career. However, following his Heisman Trophy-winning 2018 season, he would forgo his senior year and enter the NFL Draft. The A’s retain his rights, should he return to baseball.

In January 2019, Murray announced that he would enter the 2019 NFL Draft. On February 11, he announced his decision to focus on his football career, forgoing baseball.

Some believed that Murray’s pursuit of a football career at the expense of a potential one in baseball was a mistake because of his limited stature relative to a typical NFL quarterback. At the NFL Combine, Murray was widely expected to measure under his listed height of 5’10”. Murray’s final measurements were listed at 5’10 1/8″ and 207 pounds, similar to that of Seattle Seahawks starting quarterback Russell Wilson. Despite not taking part in individual drills at the combine, many saw Murray’s draft stock improve because of his greater than expected measurements. In contrast, NFL Network reporter Charley Casserly said that Murray had “the worst report I’ve ever heard on a top-ranked quarterback from the interview part of it”, though Murray’s agent vociferously disputed this report.  Gil Brandt also questioned the veracity of Casserly’s assertions.

Murray was drafted first overall by the Arizona Cardinals in the 2019 NFL Draft, a decision foreshadowed by “nearly every talent evaluator” spoken to by NFL reporter Kimberly Jones at the combine. While at the same position for Texas Tech‘s football program, Cardinals head coach Kliff Kingsbury said that he would hypothetically spend the draft’s top selection on Murray. The pick also made Murray the first athlete to be picked in the first round drafts of both the NFL draft and MLB draft, the first time that two quarterbacks from the same university have gone in the first round in successive seasons with Baker Mayfield also being selected first in the 2018 NFL Draft and the first sub-six foot tall quarterback selected number one in the NFL draft.

Murray’s father, Kevin Murray, was a quarterback at Texas A&M from 1983 to 1986. His uncle, University of Texas alumnus Calvin Murray, is a former professional baseball player for the San Francisco Giants, Texas Rangers, and Chicago Cubs. Murray is a second-generation Korean American, with his maternal grandmother being a South Korean national.

BREAKING NEWS FROM THE SPORT OF TENNIS: SERENA WILLIAMS HAS EMERGENCY SURGERY

THE MYBOYSAY SPORTS MEDIA GROUP, WOULD LIKE TO WISH A HAPPY FATHER’S DAY, TO EACH AND EVERY SPORTS FOLLOWING FATHER, IN THE ENTIRE SPORTS WORLD.