THE MLB TEXAS Rangers Great Adrian Beltre, one of the greatest third baseman in baseball history who became a member of the 3,000-hit club with the Texas Rangers, Retires From Baseball

After 21 seasons of excellence at the MLB third base position, MBSSG reports that baseball great Adrien Beltre has decided that the time is right for him to walk away from the Texas Rangers, and the game he loves, BASEBALL.

Players past and present spent much of Tuesday (November 20) joining fans in saluting Beltre for all that he brought to America’s pastime – after he announced his retirement in a letter that the Texas Rangers released before noon. In addition to sharing Beltre’s message to the public, the Rangers switched their Twitter handle to #ThankYouAB, replaced the cover photo to an image of Beltre, and peppered the team’s page with tributes to the 39-year-old Dominican star. In a statement by general manager Jon Daniels, he remembered him as the quintessential teammate and a worthy representation of the franchise’s character.

The fact that baseball is a game is often used to diminish it. “A game” is almost always preceded by “just,” and the phrase is meant to prove that baseball shouldn’t be taken seriously, or to claim that it can’t be held responsible for any significant influence, or to distract from everything else that it can be. Adrián Beltré did something different with this fact. His career was a celebration of baseball because it’s a game, not despite it. In watching him, it was impossible to forget that it’s all just a game—and he made that not just a good thing, but a beautiful one.

After 21 major-league seasons, Beltré announced his retirement on Tuesday. His record speaks for itself: 477 home runs, 1,707 RBIs, 3,166 hits. He was a four-time Silver Slugger, five-time Gold Glove, six-time finisher in the top ten for MVP. By Baseball-Reference, Beltré will retire with 95.7 WAR. Only 25 position players in the history of the game have accumulated more; the only third basemen ever to do so are Mike Schmidt and Eddie Mathews. It’s a Hall-of-Fame career, and if there’s any justice, it will be rewarded as such.

Yet none of these numbers do any justice to the experience of watching him play. Beltré’s most striking feature was not his skill, though. It was his joy. To watch him was to understand that enjoying baseball and taking it seriously do not have to be mutually exclusive acts. Fun was not a luxury item in his game, rationed out and tacked on when it could be spared. Fun was his game, built into the foundation of everything that he did. He was here to play in every sense of the word.

Adrian Beltre Was the All-Time Great You Failed to Notice

The Game of Baseball Won’t Be Nearly as Much Fun Without Adrian Beltré.

During his 21 big-league seasons Adrian Beltré played like he didn’t believe in the idea of a routine out. As a result, nothing about his game was routine.

They say that every baseball game will show you something that you’ve never seen before, but this sounds truer than it feels. The game is built on repetition, on a small set of potential outcomes, on predictive models that work more often than they don’t. You usually have an idea of what’s coming, even if you don’t know exactly what it’s going to look like. A batter goes on one knee for a wild swing, and so he’ll whiff. A lazy pop-up is hit to the shortstop, and so he’ll catch it. An umpire tells a guy to move into the on-deck circle, and so he’ll move into the on-deck circle. And so on.

Beltré’s baseball was not like this. Beltré’s baseball saw the most mundane rhythms of the game as opportunities for joyous improvisation. Beltré goes on one knee for a wild swing, and he hits a home run. A lazy pop-up is hit to the shortstop, and it’s the next act of an ongoing slapstick comedy routine between Beltré and teammate Elvis Andrus. An umpire tells Beltré to move into the on-deck circle, and so he grabs the on-deck circle and moves it over to where he’s standing. Beltré played like he didn’t believe in the idea of a routine out; as a result, nothing about his game was routine.

Part of Beltré’s act was filling empty space. It was taking gaps in the action, moments typically skimmed over only because they cannot be skipped outright—the walk back to the dugout, the pause after a force out, the lead-up to the postgame celebration—and making them into little pockets of charm. These made for the clearest display of his humor, and they made for the best highlights: clowning around with an opposing pitcher, pretending to tackle a baserunner, grabbing a broom to defend himself from a shower of Gatorade. But all of this was just a small part of what made Beltré Beltré. The rest was in the game itself. It was the spirit of his swing, unleashed even at pitches that bounced in the dirt and flew above his head and ran way out of the zone. It was a set of soft hands at the hot corner, wielded with a special ferocity. You could call it a style, but that isn’t quite right. It was an energy—crackling, kinetic, vital.

Beltré seemed to see something special in baseball; it looked like a source of purpose, not one of obligation. Without him, it’s still a game. It just won’t be nearly as much fun.

With Beltre, you have the big traditional numbers: 3,166 hits, 477 home runs, 1,707 runs batted in. You have the awards: five Gold Gloves, four Silver Sluggers, four top-10 Most Valuable Player Award finishes. And you even have an outrageous advanced statistic: 95.7 career wins above replacement, which trailed only Albert Pujols among active players before Tuesday’s announcement.

By the statistic JAWS, which was developed by Jay Jaffe, author of “The Cooperstown Casebook,” in an effort to capture a player’s overall talent as well as the explosiveness of his peak, Beltre ranks as the fourth greatest third baseman in major league history, behind only Mike Schmidt, Eddie Mathews and Wade Boggs.

It may seems crazy to rank Beltre above such luminaries as Brooks Robinson and Chipper Jones, but Schmidt said that distinction might not go far enough for Beltre.

“How about Beltre?” Schmidt said in March. “First-ballot guy, kind of hid in the weeds most of his career. Isn’t he now a 3,000-hit guy? He’s gotta be considered past me in terms of the greatest of all-time.”

Beltre hit 477 home runs in his career despite spending his first 12 seasons in pitchers’ parks. He made up for lost time once he got to a hitters’ park with the Texas Rangers.CreditMichael Ainsworth/Associated Press 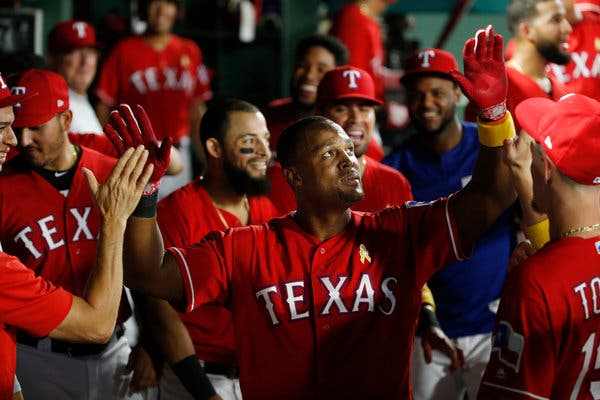 “He’ll bypass me,” Schmidt added. “Why not? He wins a Gold Glove every year and hits 40 every year; that’s better than me.”

The most underappreciated aspects of Beltre’s mastery of the game were his longevity, his defensive prowess, and the parks in which he spent much of his career.

His 2,933 career games ranks just ahead of Robinson for 14th all-time and his 11,068 at-bats rank eighth. He was a major league regular by the time he was 19 — it was determined after he had made the majors that the Los Angeles Dodgers had improperly signed him a year too early, which resulted in several suspensions as well as the team being forced to pay Beltre damages — and was still an above average player at 39.

Beltre finally relented. “And you know that resonated with everyone in that clubhouse,” Washington said, “because no one wanted to take a day off, simply because they watched Adrian.”

Perhaps the most impressive aspect of Beltre’s durability is that he kept himself on the field at such an advanced age thanks in large part to his glove.

Defense can be hard to quantify, as the more modern statistics have only been tracked since the early 2000s, but using the best methods available from each season, Baseball-Reference credits Beltre with 23.1 career defensive WAR at third base, which trails only Robinson, who had 39.1 using far less precise methods of measurement.

Adrián Beltré Pérez is a Dominican former professional baseball third baseman. Originally signed as an amateur free agent, he made his Major League Baseball (MLB) debut with the Los Angeles Dodgers in 1998 at age 19. He subsequently played for the Seattle Mariners, Boston Red Sox, and Texas Rangers. He bats and throws right-handed. He has since become one of the most all-around accomplished players in history; he ranks 13th in defensive Wins Above Replacement and is the fourth third baseman to reach 400 home runs and 1,500 runs batted in. Beltré is a four-time selection for the Silver Slugger Award and MLB All-Star Game, and a five-time winner of the Rawlings Gold Glove Award.

Beltré is the all-time hits leader among foreign-born players. The fifth major leaguer to hit at least 100 home runs for three teams, he has hit at least 20 home runs in 12 seasons, and in five, driven in at least 100 runs. He hit a major league-leading 48 home runs while playing for the Dodgers in 2004, was the team MVP of the Red Sox in 2010, and tied for the major league lead in hits in 2013 while playing for the Rangers. Sharing the record as one of four major leaguers to hit for the cycle three times, Beltré is the only one to hit three at the same stadium, Globe Life Park in Arlington. He is the sixth player with a three-home-run game in both the regular season and postseason, and just the second with both a three-home-run game and cycle in the same week. On July 30, 2017, he became the 31st player in MLB history to reach 3,000 hits and the first from the Dominican Republic.

He ranks in the top ten all-time at his position in games played, assists, putouts, and double plays. Beltré was the second to last active player to have played in the 1990’s and former Rangers teammate Bartolo Colón is the only active player left holding this feat.

Aliko Dangote has built Africa’s largest fertilizer plant to fill the void created by sanctions against Russia. Nigerian Billionaire is Supplying Fertilizer to the World When Russia Can’t