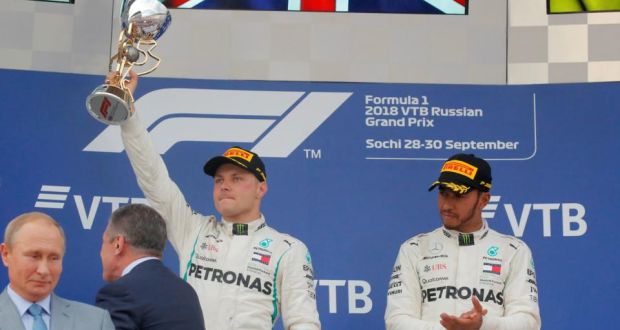 Should Lewis Hamilton go on to secure the world championship this year, his win at the Russian Grand Prix will be the only victory in a superlative season from which he will take no pleasure. His victory, ensured the moment Mercedes employed orders allowing him to pass his teammate, Valtteri Bottas, proved an ill-sitting success defined by the decidedly uncelebratory figures of the Mercedes drivers on the podium as well as their team below them.

Kimi Raikkonen was in fourth. Max Verstappen put in a storming drive from 19th on the grid after penalties for power unit replacements, to carve thorough the field and claim fifth place. His team-mate Daniel Ricciardo, who also started at the back, was sixth.

Hamilton has been explicit in the past in his desire for the team not to employ orders and was uncomfortable with their use in Russia after he took the flag in front of Bottas.

“It is definitely a win on my list of wins that I am least proud of,” he said. “The strangest day I can remember in my career. I want to win the right way. As racing drivers we exist to win; if you tell us we can’t, it is like you are taking our life away. I would never wish it on someone else and I would never ask for it ever. I made sure in a meeting that they knew this is not how I want to win.”

Lewis Hamilton wins the Russian Grand Prix – as it happened

There was the expected disapproval that the distasteful spectre of team orders always provokes yet the decision was unsurprising. Team orders have long been legal in F1 and Mercedes, aware of Ferrari’s strong challenge this year, were unwilling to leave anything to chance.

It is an unedifying way for a race to be decided but it was both understandable and planned for. With Sebastian Vettel finishing third, Hamilton extended his title lead to 50 points, a 10-point gain, as opposed to the three-point boost second place would have delivered.

Hamilton scored a solid victory having briefly lost second to Vettel, he came back with a fine pass. But the crucial moment was when Mercedes ordered Bottas to allow him past to ensure the win. The team have avoided using team orders previously but clearly felt they had to maximise Hamilton’s advantage over Vettel. The team principal, Toto Wolff, was apologetic to a visibly disappointed Finn. “Difficult day for you and for us, let’s discuss it later when we come together,” he said.

It is Hamilton’s third win at the Russian Grand Prix and the 70th of his career. He took the flag twice here for Mercedes in 2014 and 2015, both seasons when he went on to win the title. With five wins now from the last six races he is an almost unassailable position to do so again and claim his fifth world championship to equal Juan Manuel Fangio.

The victory means Mercedes continue their run of being unbeaten at Sochi since the race joined the calendar in 2014. Hamilton’s eighth win of the season is ominous for Ferrari. Both teams brought aero upgrades to the race, largely centred on the front wing but for the first time this season, Mercedes seem to have gained a real advantage. The Ferrari has struggled, particularly in the technical final sector for grip, where Hamilton has been strong through the last part of the lap all weekend. He exploited it but did not take great pleasure in the manner of his victory.

Mercedes had been equivocal about using team orders before the race and Hamilton has been clear in the past he did not want then to be employed. However, having faced such tough competition from Ferrari and Vettel this season and with Bottas clearly out of the title fight, the team opted to ensure Hamilton moved one step closer to closing out the championship. They are in a superb position to do so. On this evidence their car looks exceptionally strong going forward, while Ferrari must find more from their new package.

Bottas had got away cleanly from pole but Vettel, from third, made a superb start in the Finn’s slipstream and pulled alongside Hamilton who had started alongside Bottas. But the British driver was just able to hold second through the opening corners.

Bottas opened a gap immediately, 1.5 seconds clear of Hamilton with Vettel settling in behind a further two seconds back by lap six. The front runners aiming for a one-stop were, as they had in Singapore, managing their tyres through the first stint.

Bottas pitted first and took the soft tyres on lap 13, with Hamilton and Vettel staying out. Ferrari opted to go aggressive and went for the undercut. The German came in a lap later and put in a very quick circuit on his new soft tyres while Hamilton could not match him on track. He came in a lap later to emerge just behind Vettel, losing second place.

However, confident with the grip of his new rubber and the pace of his car he charged. Vettel locked up at turn 13 allowing Hamilton to close, enabling him to go for the pass through turn two which Vettel defended. But Hamilton finally made it stick, superbly under braking into turn four. Vettel’s defence into two, moving on the straight, was investigated by the stewards but they took no further action.

Verstappen, yet to pit, held the lead but Bottas, Hamilton and Vettel once again settled into two-second intervals from one another. By lap 23 Hamilton was catching Bottas and on lap 26 he was ordered to let Hamilton past. The British driver was quicker than Bottas and the team clearly wanted a buffer to the Ferrari. Chief strategist James Vowles told Bottas they were concerned over a risk to Hamilton with a tyre blister and the threat from Vettel. It was a ruthless decision but in no way unexpected.

Hamilton was quicker than Verstappen but unable to pass and had to manage the gap until the Dutchman pitted on lap 43. At which point the British driver, with track position, had done enough, back in the lead he was able to control the race and was comfortable to the flag. Vettel tried to push after Bottas but could not threaten the Finn and he remained in third.

Sauber’s Charles Leclerc put in another strong performance for seventh, in front of the Haas of Kevin Magnussen. The Force Indias of Esteban Ocon and Sergio Perez were in ninth and 10th. – Guardian.

MORE ON THE VICTORIOUS HAMILTON

Lewis Carl Davidson Hamilton MBE (born 7 January 1985) is a British racing driver who races in Formula One for Mercedes AMG Petronas. A four-time Formula One World Champion, he is often considered the best driver of his generation and widely regarded as one of the greatest drivers in the history of the sport. He won his first World Championship title with McLaren in 2008, then moved to Mercedes where he won back-to-back titles in 2014 and 2015 before winning his fourth title in 2017. Statistically the most successful British driver in the history of the sport, Hamilton has more World Championship titles (4) and more race victories (70) than any other British driver in Formula One. He also holds records for the all-time most career points (2,916), the most wins at different circuits (26), the all-time most pole positions (79) and the most grand slams in a season (3).

THE CITY OF NEW ORLEANS IS PARTYING PRIOR TO THE SUPER BOWL, BECAUSE THE HEAD COACH OF THE NEW ORLEANS SAINTS, “SEAN PAYTON”, HAS BEEN RE-INSTATED TO THE NFL BY ROGER GOODELL, THE COMMISSIONER!!