New Zealand became the first men’s side to win consecutive Rugby World Cup Sevens titles as they beat England 33-12 in the final on Sunday.

The All Blacks took a 14-0 lead in San Francisco as Sione Molia scored two tries, both converted by Kurt Baker.

A Michael Ellery converted try halved the deficit at half-time, before a Joseva Ravouvou score took it to 19-7.

Scotland claimed seventh place overall after Jamie Farndale scored two late tries in a 29-24 win over against France, while Ireland secured a 24-14 win over Australia in the Challenge Cup final to finish ninth.

Wales had to settle for their lowest place finish since 2001, coming 11th following a 35-12 win over Canada.

This year’s tournament saw the traditional round-robin stage scrapped in favour of a single-elimination knockout from the opening round of matches.

Australia were a notable first-round casualty in the men’s draw while England’s women fell at by Ireland.

“We’re getting a lot of positive feedback from fans about the drama of knockout,” said World Rugby chief executive Brett Gosper, as 102,000 fans attended the event over the three days of competition.

“It makes each game exciting. It can be brutal for teams, but sport’s brutal.”

England head coach Simon Amor said he was “pleased” with how his players adapted to the new structure, but captain Tom Mitchell claims he is “not totally sold on the new format”.

“There are pros and cons to it but it’s up to World Rugby to keep mixing things up and keep improving the game,” said Mitchell.

“As a spectacle I’m sure everyone enjoyed it, but when you’ve got coaches and players’ livelihoods at stake, and the format isn’t quite what we’re paid to do, it’s an interesting question,” said Laidlaw.

World Rugby has confirmed that a Samoa player has been suspended after a tunnel fracas during the sevens World Cup in San Francisco on Saturday.

Wales’s Tom Williams was replaced in their squad on Sunday after sustaining injuries allegedly following an incident with Samoa’s Gordon Langkilde. Langkilde was suspended for the final day of the tournament, according to the Evening Standard, which said that police are investigating.

Williams is reported to have been injured after Wales’s 24-19 extra-time win against Samoa. World Rugby confirmed that a Samoan player had been suspended and that US authorities were pursuing the matter.

“We can confirm a Samoa player has been provisionally suspended following an initial investigation into an alleged incident in the tunnel area,” the statement read. “The alleged behaviour is not aligned with the sport’s values and the excellent spirit in which this competition has been played.”

Meanwhile the England head coach, Simon Amor, was positive about his squad’s sevens campaign despite defeat in the World Cup final. Amor’s side’s hopes of achieving sevens World Cup glory for the first time since 1993 were dashed by New Zealand.

England, inaugural sevens world champions 25 years ago, reached the final at AT&T Park by beating Samoa, the USA and South Africa. But against New Zealand they lost 33-12 despite tries from Mike Ellery and Ruaridh McConnochie.

“This marks the end of a very long year but I am really pleased with the way that we’ve grown as a programme and how the players have grown as well,” Amor said. “Since the Commonwealth Games we have won medals at every tournament bar one. And alongside that we’ve got some really exciting young talent coming into the squad, so that is really encouraging. 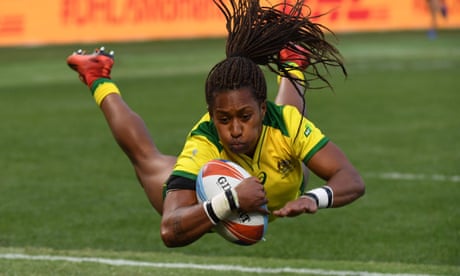 “It’s obviously disappointing to have missed out on that top spot but we made a few too many errors and turned the ball over too many times against a very good New Zealand team. I am delighted with the way the guys performed right the way through the tournament. They came through some really close games and played some outstanding rugby.”

Form in the season-long world series suggested England might have had their work cut out to progress beyond the quarter-finals. But after edging past Samoa in the round of 16, then winning a thriller against the United States, they moved up a gear.

England also responded well to the tournament’s straight knockout format. Amor added: “The format makes it high-pressured with lots of drama, which is great for all those fans watching. As a result of that you have to approach the competition in a different way, and I am really pleased with the way that the guys adapted to this new knockout competition.

“Playing at the venue [AT&T Park] was brilliant. The atmosphere in the stadium was unbelievable right the way through the tournament.”

New Zealand were crowned sevens World Cup winners for a third time. They blasted out of the blocks to go ahead inside the opening minute when Sione Molia showed his pace to outstrip England’s defence and claim a try that Kurt Baker converted. England could not get out of their own half, and Molia punished them with a close-range touchdown, before Baker’s conversion opened up a 14-point advantage.

MORE ON THE ALL BLACKS OF NEW ZEALAND

The New Zealand national rugby union team, called the All Blacks, represents New Zealand in men’s rugby union, which is known as the country’s national sport. The team has won the last two Rugby World Cups, in 2011 and 2015, as well as the inaugural tournament in 1987.

They have a 77% winning record in test match rugby, and are the only international side with a winning record against every opponent. Since their international debut in 1903, they have lost to only six of the 19 nations they have played in test matches. Since the introduction of the World Rugby Rankings in 2003, New Zealand has held the number one ranking longer than all other teams combined. The All Blacks jointly hold the record for the most consecutive test match wins for a tier one ranked nation, along with England.

New Zealand competes with Argentina, Australia and South Africa in The Rugby Championship. The All Blacks have won the trophy fifteen times in the competition’s twenty-two-year history. New Zealand have completed a Grand Slam tour four times – 1978, 2005, 2008 and 2010. The All Blacks have been named the World Rugby Team of the Year ten times since the award was created in 2001, and an All Black has won the World Rugby Player of the Year award ten times over the same period. Fifteen former All Blacks have been inducted into the International Rugby Hall of Fame.

New Zealand’s early uniforms consisted of a black jersey with a silver fern and white knickerbockers. By the 1905 tour, they were wearing all black, except for the silver fern, and the name All Blacks dates from this time. The team perform a haka, a Māori challenge or posture dance, before each match. The haka has traditionally been Te Rauparaha‘s Ka Mate, although since 2005 Kapa o Pango has also been performed.

JOE PATERNO’S OUSTER AT PENN STATE APPEARS TO BE ABSOLUTE!

FLOYD MAYWEATHER CALLS OUT PACQUIAO, SAY’S, LET’S FIGHT ON MAY THE 5TH! WHAT’S THE PROBLEM? PAC, ARE YOU STILL THE MAN?