By the time he stood atop the podium at the German Grand Prix, the atmosphere around Lewis Hamilton was positively apocalyptic. The rain that had played such a crucial role in his victory had turned torrential. Great crashes of thunder rolled across the Hockenheimring, punctuated by staccato flashes of lightning amid dense clouds that subsumed the circuit in a sea of grey. Nature itself, it seemed, was determined to mark one of the most extraordinary and unlikely wins Formula One has seen and provide a suitably dramatic backing as the result hung in the balance for over two and half hours, while Hamilton waited on tenterhooks to see if his victory would stand.

At the heart of the maelstrom as the national anthem played, stood Hamilton, arms outstretched, head turned towards the heavens, rain streaming from his face, simply glorying in the moment. He had started from 14th, a win was beyond his wildest expectations. But it was only ultimately confirmed at gone 7.30pm when the stewards decided not to penalise him for a late exit from the pit‑lane entry, issuing a reprimand instead. 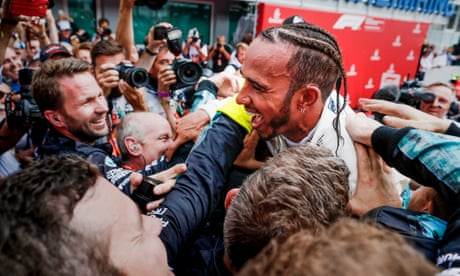 Damage limitation had been his intention after a mechanical failure in qualifying saw him start in the back half of the grid but the turn around could not have been more remarkable or wide-reaching.

His championship rival Sebastian Vettel had gone in to the race with an eight-point advantage and starting from pole was expectant of extending it. But the German was caught out by the rain and crashed while leading in the final third. If Hamilton viewed what he described as a “biblical” storm at its close as a suitably operatic finale to his epic day, for Vettel it would have surely reflected his fury. He was left impotent, banging his steering wheel in anger with his stricken car in the barriers.

Hamilton’s win once again puts him in charge of the title race, the sixth time the lead has changed hands this season and he now has a 17-point advantage over Vettel. Psychologically it is a major blow in Hamilton’s favour. His race engineer Peter Bonnington said “miracles do happen” to his driver at the close of the race. Hamilton echoed the sentiments when saying later that he believed his prayers before the race had been answered.

It is Hamilton’s fourth win at the German Grand Prix, matching Michael Schumacher as the most successful driver at the race and of import for Mercedes in securing a one-two, with Valtteri Bottas in second, regaining their lead of the constructors’ championship.

It had for so long looked to be in Vettel’s hands. He made a clean start from pole to hold the lead while Hamilton had to negotiate his way through the midfield. He did so with aplomb but the German held all the cards out front. Mercedes kept Hamilton out long, hopeful they could take advantage of rain later in the race to gain a free stop. The rain did arrive but it did not play quite the part Mercedes had expected. Before that point, though, Ferrari had already miscalculated. Vettel had pitted after Kimi Räikkönen, who ultimately finished in third, and emerged behind the Finn. The team hesitated in moving Räikkönen over and Vettel lost time, while his tyres took a hammering in his teammate’s wake. They finally ordered the pass on lap 39 but it had been at the cost of wear to his rubber.

Hamilton finally stopped on lap 42 and the rain began to fall a lap later. He was in fourth but on the freshest rubber and he pressed as hard as he could. But with at best the hope of third, before the race turned in a moment.

With intermittent rain, conditions were treacherous and Vettel, perhaps with that little bit of extra grip lost behind Räikkönen, could not keep it on the island. He lost the rear for a tiny moment and went straight on at turn 13, his race over. It triggered the safety car and with Bottas and Räikkönen both pitting, Hamilton took track position and the lead by staying out. With cars spinning off all over the track Hamilton’s touch proved immaculate.

But there was more to come. In a further pivotal moment, the team called him in then ordered him to stay out literally at the last moment, causing Hamilton to veer out of the pit lane entry and back on to the track. It could have cost him the win but, having presented his case, clear heads prevailed and the victory stood.

After the restart Bottas launched a fearsome assault on his teammate and Hamilton defended like a terrier until the team ordered the Finn to hold station. They have previously allowed their drivers to race but perhaps the fear of losing them both this time was too much to contemplate. It was the final decisive play in ensuring victory – one that would take some time to sink in, he said afterwards, but this was a day he will long remember.

If he wins his fifth title this season, the thunderous storm at Hockenheim may have heralded the moment the battle truly swung in his favour.

Lewis Carl Davidson Hamilton MBE (born 7 January 1985) is a British racing driver who races in Formula One for Mercedes AMG Petronas. A four-time Formula One World Champion, he is often considered the best driver of his generation and widely regarded as one of the greatest drivers in the history of the sport. He won his first World Championship title with McLaren in 2008, then moved to Mercedes where he won back-to-back titles in 2014 and 2015 before winning his fourth title in 2017. Statistically the most successful British driver in the history of the sport, Hamilton has more World Championship titles (4) and more race victories (66) than any other British driver in Formula One. He also holds records for the all-time most career points (2,798), the most wins at different circuits(26), the all-time most pole positions (76) and the most grand slams in a season (3).

In his first season in Formula One, Hamilton set numerous records as he finished runner-up in the 2007 season to Kimi Räikkönen by just one point, including those for the most consecutive podium finishes from debut (9), the joint most wins in a debut season (4) and the most points in a debut season (109). The following season, he won his first title in dramatic fashion; on the last corner of the last lap in the last race of the season, becoming the then-youngestFormula One World Champion in history. After four more years with McLaren without finishing higher than fourth in the drivers’ standings, Hamilton signed with Mercedes in 2013, reuniting with his childhood karting teammate, Nico Rosberg. In his first season, he finished 4th once again, the third time in five years.