Spanish Grand Prix: Mercedes’ Lewis Hamilton ‘Rejuvenated’ By Victory, As He Once Again Dismantles The Opposition In Barcelona To Deliver A Simple Message: He Is The Greatest

After he dominated the final session of qualifying to take his 74th pole position, Hamilton again crushed his doubters as he led Valtteri Bottas home by 20.5s to take his 64th career victory.

“The cool thing about being a world champion is the team listen to what you say and they go away and focus on those areas, and it’s an amazing process you do together and then you come back and it works.”

Lewis Hamilton is back, and if anyone doubted it after he dominated the final session of qualifying to take his 74th pole position, he disabused them in crushing style this afternoon as he led Mercedes team-mate Valtteri Bottas home by 20.5s to take his 64th career victory.

Sebastian Vettel was in the race, but even a sneaky second pit stop for another fresh set of medium tyres, during a virtual safety car period on the 42nd lap when Esteban Ocon’s Force India slowed to a halt, he could make little meaningful impression on final podium finisher Max Verstappen and had to settle for fourth.

The Dutchman’s single-stop race for Red Bull looked as if it might take the fight to Mercedes at one stage. But the Silver Arrows team pulled off a strategic blinder this time by avoiding having to make two stops with both of their drivers, and when they made it to the flag after unexpected single-stop races of their own – albeit much earlier than Verstappen’s – the result was sealed.

A bad day for Ferrari, which saw Vettel’s car understeering as it ate its tyres and Kimi Raikkonen’s retire, Mercedes rubbed it in just like they had been doing since 2014, retaking the lead in the constructors’ world championship, too.

Hamilton took the lead at the start as Vettel slotted into second ahead of Bottas, but there was carnage behind them exiting the first corner. As his Haas team-mate Kevin Magnussen got into a bit of a twitch just ahead of him, Romain Grosjean lost the airflow over his front wing, got into trouble of his own as a result at Turn 2, and spun in a clockwise direction. But the Frenchman compounded that error by keeping his boot in it and trying to spin-turn away from the rapidly approaching lower midfield traffic.

It was a plot that proved as disastrous as his infamous car-smashing start to the 2012 Belgian GP, as he spun right into the path of Nico Hulkenberg and Pierre Gasly, who had no chance to avoid the errant Haas. Exit three cars in one fell swoop, and the resultant debris took until lap six to clear away as the Safety Car paced the field. Grosjean is being investigated by the race stewards.

On the restart at the end of that sixth lap, Hamilton timed things beautifully and simply left Vettel behind in the early stages. Ferrari brought their man in to switch from soft Pirelli tyres to mediums as soon as the 17th of the 66 laps, and Mercedes covered that by bringing Bottas in on the 19th as he was fighting with the German for second place. But Hamilton, already breaking the lap record with ease, stayed out until the 25th.

That put Verstappen into the lead, and for a while it seemed like Red Bull might have repeated their Chinese GP cunning. On his soft tyres the Dutchman stayed in the lead, albeit narrowly, as Hamilton on his fresher medium rubber encountered the usual dirty air that makes passing so tricky. But the Briton resumed the lead when Verstappen pitted for similar rubber after 34 laps. Red Bull were clearly able to go the distance without another stop, but there were doubts that Mercedes could as they were obviously on a two-stopper. But as the race unravelled it transpired that their rubber was standing up well enough to risk staying out, even though Hamilton’s tyres were nine laps older and Bottas’s 19.

The Finn was troubled by loss of operating temperature and thus grip if he tried to back off too much to preserve his rubber, but Hamilton was still able to go as quickly as ever. 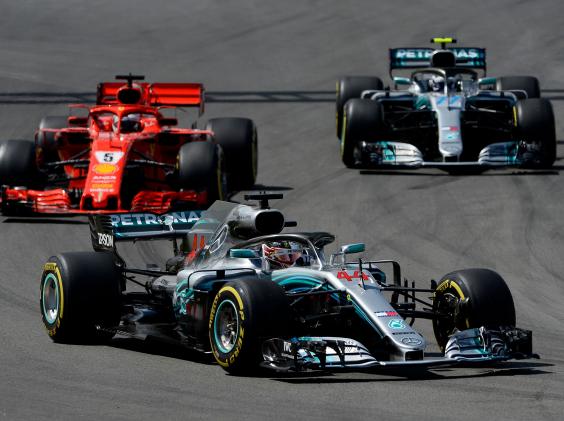 It didn’t help Verstappen’s cause when he inadvertently tapped the back of Lance Stroll’s Williams on the 43rd lap, but his crew back in Milton Keynes did the calculations on the effect a damaged left endplate on his front wing might have on his car’s balance, and with the tools at his disposal in the cockpit he was able to rebalance it as much as possible to minimise the disadvantage.

“I was trying to be as close as I could be to Stroll under the virtual safety car and felt that he braked a bit early and I slipped a bit,” Verstappen said in his matter-of-fact way. “Luckily it was just the outside of the wing, so I just had a little bit of understeer in the fast corners. It wasn’t too bad, and I don’t think it affected me too much.”

Third was his best result thus far in a difficult season, and he said he enjoyed being on the podium after a clean race. “Hopefully we can just work from here and score more good results.”

It was soon clear that Ferrari still didn’t have the pace to challenge him, let alone the Mercedes, despite Vettel’s second set of mediums, so though Vettel closed in as Verstappen eased off on the final lap, fourth place was the best the Italian team could hope for as Daniel Ricciardo in the second Red Bull eventually set the fastest lap but finished a distant fifth ahead of the valiant Magnussen.

Despite the masterclass he had just given, Hamilton was cautious when it was suggested the result had been a turning point in a thus-far troubled season.

“I’m only taking it a race at a time, but team have done a great job this weekend. I honestly had no idea what our pace be like today. I thought the race would be much closer. I won’t say that the synergy between the car and myself was perfect, but it was close for the first time this year. We had a great pit stop, great strategy, and a good start. To get a 1-2 here for the first time this year is a great result for us, especially with all of the Mercedes Board here to see the force within this team. I said I wanted to win in the way I like to, so I was very happy when I crossed the line.”

Hamilton is now 17 points ahead of Vettel in their mutual chase for a fifth world title, but 16 races remain.

Both Hamilton and Wolff said they had concerns that they might not be able to keep up the momentum at the next race in Monaco on 24-27 May, however, where Mercedes struggled last year. Hamilton pointed particularly to Red Bull’s performance in the slow, last part of the lap in Spain, which echoes some of the characteristics of the Monaco track.

Hamilton said: “Monaco is going be a serious challenge. The others are going to be hard to beat. [Red Bull’s] Daniel Ricciardo was much quicker in the final sector. That is all downforce. They are going to be rapid in Monaco.”

Wolff said he was “worried” about Monaco, adding: “We have seen in the last years there were tracks that suited us well and some we weren’t perfect. It is very difficult to undo the DNA of a car and Monaco, Budapest and Singapore were all tracks where we under-performed.

“It is a difficult one. Why our car doesn’t like to be quick around the corners in Monaco we haven’t found out yet.

“We know what went wrong last year. But it’s as much as I am overwhelmed with the victory today, my mind is already in Monaco and I remember Sunday night was not as pleasant last year.”

MORE ON THE F1 RACING GREAT:

Lewis Carl Davidson Hamilton MBE (born 7 January 1985) is a British racing driver who races in Formula One for the Mercedes AMG Petronas team. A four-time Formula One World Champion, he is often considered the best driver of his generation and widely regarded as one of the greatest drivers in the history of the sport. He won his first World Championship title with McLaren in 2008, then moved to Mercedes where he won back-to-back titles in 2014 and 2015 before winning his fourth title in 2017. Statistically the most successful British driver in the history of the sport, Hamilton has more World Championship titles (4) and more race victories than any other British driver in Formula One (64). He also holds records for the all-time most career points (2,705), the most wins at different circuits (25), the all-time most pole positions (74) and the most grand slams in a season (3).

Born and raised in Stevenage, Hertfordshire, Hamilton’s interest in racing started when his father bought him a radio-controlled car when he was six. He was signed to McLaren’s young driver support programme in 1998, after he approached McLaren team principal Ron Dennis at an awards ceremony three years earlier and said “one day I want to be racing your cars”. After winning the British Formula Renault, Formula 3 Euro Series, and GP 2 championships on his way up the racing career ladder, he made his Formula One debut twelve years after his initial encounter with Dennis, driving for McLaren in 2007. Coming from a mixed background, with a black father and white mother, Hamilton is the first and only black driver to race in Formula One.

In his first season in Formula One, Hamilton set numerous records as he finished runner-up in the 2007 season toKimi Räikkönen by just one point, including those for the most consecutive podium finishes from debut (9), the joint most wins in a debut season (4) and the most points in a debut season (109). The following season, he won his first title in dramatic fashion; on the last corner of the last lap in the last race of the season, becoming the then-youngestFormula One World Champion in history. After four more years with McLaren without finishing higher than fourth in the drivers’ standings, Hamilton signed with Mercedes in 2013, reuniting with his childhood karting teammate, Nico Rosberg. In his first season, he finished 4th once again, the third time in five years.

THE BELMONT STAKES WILL RUN IN LESS THAN 20 HOURS, AND “ICE BOX”, THE NICK ZITO TRAINED HORSE, HAPPENS TO BE THE FAVORITE AT 3-1 TO TAKE THE RACE IN NEW YORK, THE 3RD LEG OF THE TRIPLE CROWN.