Tim Raines finished his big league career as the most successful base stealer – ranked by percentage – in MLB history.

He is now a part of baseball’s most exclusive club: The one percent of big leaguers who have been elected to the Hall of Fame.

Born Sept. 16, 1959 in Sanford, Fla., Raines was selected in the fifth round of the 1977 amateur draft by the Montreal Expos. During his first full season in the big leagues in 1981, he batted .304 with 71 stolen bases in a strike-shortened campaign – electrifying fans with his speed. He finished second in Rookie of the Year voting, 19th in MVP voting and earned his first All-Star selection.

Raines earned All-Star Game selections in each of his first seven full seasons. He finished in the top 10 in MVP voting three times and won a Silver Slugger and a batting title in 1986 with a .334 average. He led the league in stolen bases from 1981-1984 and in runs scored in 1983 and 1987.

In 1991, after 13 years in Montreal, Raines was traded to the Chicago White Sox. After five years on the South Side, Raines went to the Yankees and got a taste of postseason success. Raines helped the Bronx Bombers to World Series Championships in 1996 and 1998.

Six months after signing a free agent contract with the Athletics in 1999, Raines was diagnosed with lupus. He spent the rest of the year and all of 2000 undergoing treatment and recovery.

Raines returned to the big leagues in 2001 and played for the Expos, Orioles and Marlins during two his final two seasons. On a minor league rehab assignment for a shoulder injury, Raines and his son, Tim Raines Jr., became the first father-son pair to play against each other in a professional game. Later that year, he played with his son for the Baltimore Orioles.

Tim Raines finished his big league career with the highest percentage of stolen bases of any player with 400-plus steals. 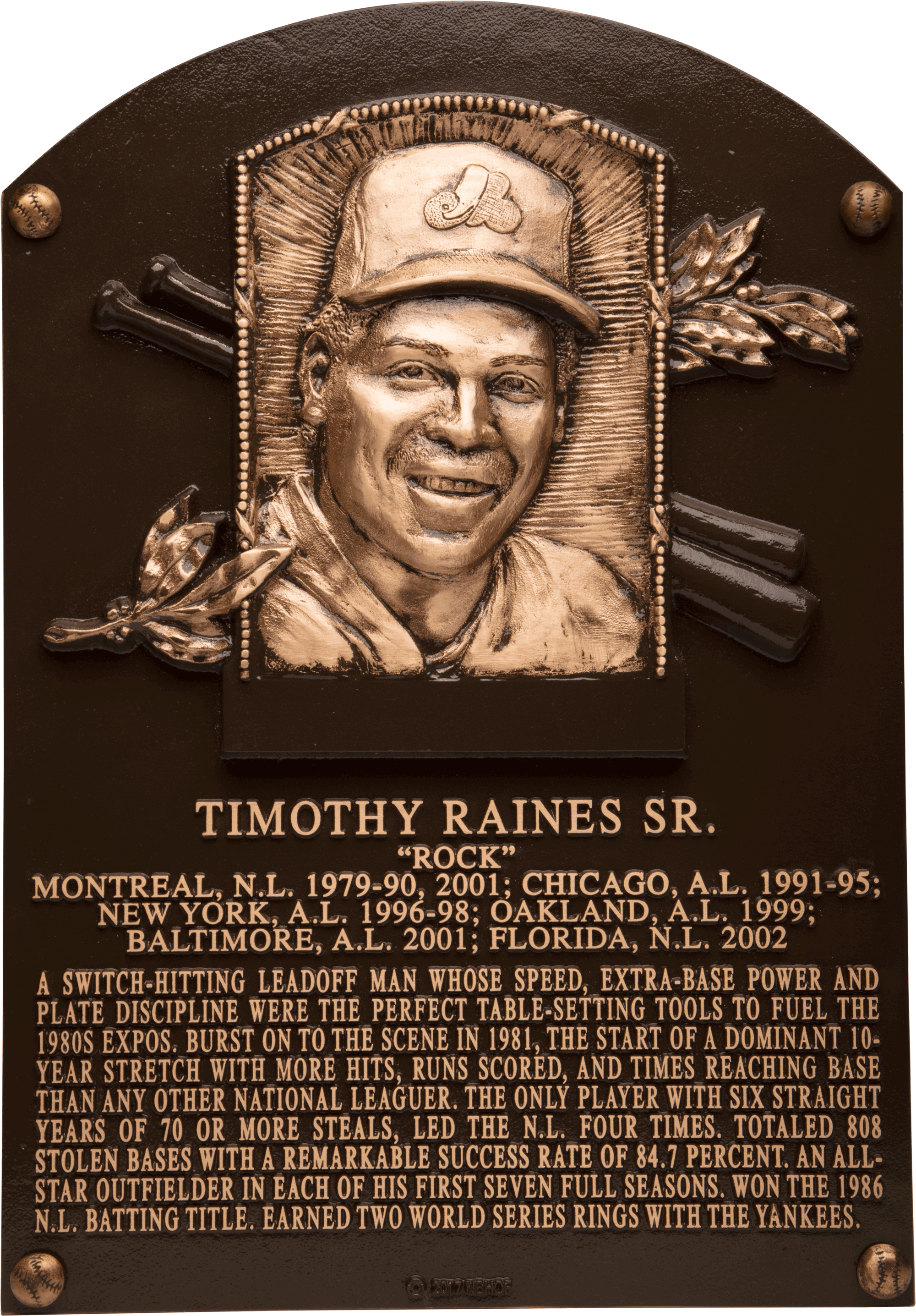 TIM RAINES IS THE ONLY PLAYER IN BASEBALL HISTORY TO STEAL AT LEAST 70 BASES IN SIX CONSECUTIVE SEASONS (1981-86).

Timothy Raines Sr. (born September 16, 1959), nicknamed “Rock”, is an American professional baseball coach and former player. He played as a left fielder in Major League Baseball for six teams from 1979 to 2002 and was best known for his 13 seasons with the Montreal Expos. He is regarded as one of the best leadoff hitters and baserunners in baseball history.  In 2013, Raines began working in the Toronto Blue Jays organization as a roving outfield and baserunning instructor.

Raines is the 1986 NL batting champion, a seven-time All-Star, and four-time stolen base champion. He was elected to the Hall of Fame on January 18, 2017.

The Montreal Expos selected Raines in the fifth round of the 1977 Major League Baseball draft.  After debuting with six games as a pinch runner in 1979, he played briefly as a second baseman for the Expos in 1980 but soon switched to playing the outfield, and rapidly became a fan favorite due to his aggressiveness on the basepaths. In the strike-interrupted 1981 rookie season, he batted .304 and set a then Major League Baseball rookie record with 71 stolen bases,  breaking the previous mark of 56 steals set by Gene Richards in 1977.  Raines was caught stealing for the first time in 1981, after having begun his career with a major league record 27 consecutive successful stolen bases. Raines was the runner-up for the National League’s Rookie of the Year Award in 1981, which was won by Los Angeles Dodgers pitcher Fernando Valenzuela.

In 1983, Raines stole a career high of 90 bases, the second-highest total in franchise history, and scored 133 runs, a franchise record. He was named Expos Player of the Year in 1983, 1985, and 1986. In each season from 1981 to 1986, Raines stole at least 70 bases. He had a career-high .334 batting average in 1986, winning the National League Batting Championship. Raines maintained a consistently high on-base percentage during this period and a rising slugging percentage, reaching a career peak of .429 in 1987. Although he never won a Gold Glove Award, Raines was an excellent defensive player who led the National League with 21 assists in 1983 and, with 4 double plays, tied for the league lead in double plays by an outfielder in 1985.

Raines became a free agent on November 12, 1986,  but in spite of his league-leading play, no team made a serious attempt to sign him.  (During this period, the Major League Baseball owners acted in collusion to keep salaries down.) On May 1, 1987, hours after being permitted to negotiate again with Montreal, Raines signed a new deal with the Expos for $5,000,000 over three years, and a $900,000 signing bonus.  In his first game back, on May 2, facing the Mets, although Raines had not participated in spring training or any other competitive preparation for the season, he hit the first pitch he saw off the right-field wall for a triple. Raines finished the game with four hits in five at-bats, three runs, one walk, a stolen base, and a game-winning grand slam in the 10th inning.  Even without having played in April, Raines led the Expos in runs, walks, times on base, runs created, and stolen bases, in addition to batting average, on-base percentage, and slugging percentage.  He also garnered MVP honors in the All-Star Game as he delivered a game-winning triple in the 13th inning. Raines would, in 1992, be one of dozens of players retroactively awarded collusion damages, receiving over $865,000.

The Expos traded Raines to the Chicago White Sox on December 20, 1990, along with Jeff Carter and a player to be named later (PTBNL), later identified as Mario Brito, in exchange for Iván Calderón and Barry Jones. 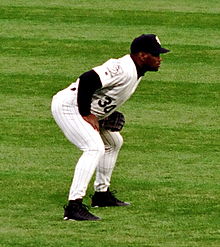 In his first season in the American League, Raines hit for a .268 average but with a .359 on-base percentage; he was second on the team in runs scored as the White Sox finished the season in second place in the American League Western Division. His average improved in 1992 to .294 with a .380 on-base percentage. In 1993, despite missing nearly six weeks in April and May due to a torn ligament in his thumb he suffered while stealing a base, he managed to hit .306 with 16 home runs as the White Sox won the American League Western Division title.

In the 1993 American League Championship Series against the Toronto Blue Jays, Raines posted a .444 batting average and scored five runs in a losing cause.

On December 28, 1995, the White Sox traded Raines to the New York Yankees for future considerations; in February 1996, the teams agreed on Blaise Kozeniewski as the return. With the Yankees, Raines received two World Series rings in 1996and 1998. While his playing time was curtailed due to injuries, he contributed to a loose clubhouse atmosphere, and was productive when he came up to the plate.

In January 1999, Raines signed as a free agent with the Oakland Athletics. After a kidney biopsy on July 23, Raines was diagnosed with lupus and spent the rest of the year undergoing treatment and recovery.

Raines was signed by the Yankees as a free agent on February 1, 2000,  but was released on March 23. On December 21, Raines was signed by the Expos.  At the Expos home opener in 2001, Raines received what he described as the longest and loudest standing ovation in his entire career, resulting in the pitcher walking him on four pitches.  With limited playing time, Raines batted .308, with a .433 on-base percentage and a .436 slugging percentage. That same year, he was inducted into the team’s Hall of Fame.

Raines underwent surgery on May 31 due to a left shoulder strain, and spent time rehabilitating with the Expos Triple-A club, the Ottawa Lynx. On August 21, 2001, Raines and his son, Tim Raines, Jr., became the first father-son pair to play against each other in an official professional baseball game, when the Lynx played theRochester Red Wings (the two had faced each other earlier in the year during spring training).  Raines returned to the major league club on August 22.

Baltimore Orioles Tim Raines Jr., right, and his father Tim Raines of the Montreal Expos meet with the media at the Orioles training camp in Fort Lauderdale, Fla .Tuesday, March 6, 2001 prior to a spring training game. Father and son each had an RBI hit in their first at bat in the game.

Raines played his last season in 2002 with the Florida Marlins. He is one of only 29 players in baseball history to date to have appeared in Major League baseball games in four decades, and was the last active player who was involved with the Pittsburgh drug trials.

With 808 steals in his career, Raines has the fourth-highest total in major league history, behind Rickey Henderson, Lou Brock and Ty Cobb.  Until 2008, His career stolen base percentage (84.7%) was the highest in major league history for players with 300 or more attempts, and he was successful on 40 consecutive steal attempts between July 1993 and August 1995, setting an American League record at the time (the record was broken by Ichiro Suzuki in May 2007, when he completed 45 consecutive steals).

From 1983 to 1987, Total Baseball rated him as one of the National League’s five best players each season.  He is also listed as the 40th greatest non-pitcher in major-league history according to Bill James‘s win shares formula.

Baseball-Reference.com Leader and Record Board Index

Raines’ uniform number 30 was retired by the Montreal Expos.

Raines was a National League All-Star in 7 consecutive seasons (1981–1987), and was named the Most Valuable Player of the 1987 All-Star Game.

In 1981 the Sporting News named Raines the National League Rookie of the Year.

Raines finished in the top 10 in voting for the NL Most Valuable Player Award three times (1983, 1986, 1987). He won a Silver Slugger Award as an outfielder in 1986 when he led the National League in both batting average and on-base percentage.

In 2013, Raines was elected into the Canadian Baseball Hall of Fame.

In 2017, Raines was elected in the National Baseball Hall of Fame and Museum.

Raines was elected to the Hall of Fame in 2017, appearing on 86.0% of ballots cast. He was eligible for election to the Baseball Hall of Fame in January 2008, and various sabermetricians and commentators had supported his induction prior to his being elected in 2017.

Raines began his coaching career in 2003 as manager of the Class A-Advanced Brevard County Manatees affiliate of the Expos. He was promoted to the major league team in 2004 and was present for the Expos’ final games as a Montreal franchise.

He was a coach for the White Sox from November 2004 until October 2006.  During the 2005 World Series Championship season, Raines served as first base coach. During the 2006 season, he served as bench coach. He was the hitting coach for the minor-league Harrisburg Senators in 2007,  but was not retained by the team for 2008. Raines signed a two-year contract to manage the Newark Bears of the Atlantic League, starting in 2009. After the 2010 season, the Bears moved to the Canadian American Association of Professional Baseball, and the team announced Raines would return to manage in 2011.  In 2012, he was an assistant coach and Director of Player Development for the Bears.  The Toronto Blue Jays hired Raines as a minor league baserunning and outfield coach in 2013.

In 1979, Raines married Virginia Hilton, a classmate at Seminole High School. The couple had two children: Tim, Jr. (“Little Rock”), and André (“Little Hawk”).  In high school, he was a running back and has said he enjoyed football more than baseball at the time.[citation needed] On the matter between the two he reflects, “…in football I was a running back, so in the NFL my career would have probably lasted six or seven years and in baseball I ended up playing 23 years. In baseball you can play a long time so I think it’s better when you think of it in that way.”

In 1985, Raines became a resident of Heathrow, Florida.[citation needed] In 2007, he moved to Estrella Mountain Ranch, a suburb of Phoenix, Arizona, and married Shannon Watson from Arnprior, Ontario. She had twin babies in 2010.

Martellus Bennett Drew His Teammates And It’s Everything

Happy Father’s Day To All The Dads