Roger Federer (SUI) celebrates at match point as he defeated Stan Wawrinka (not pictured) 7-6, 6-4 in the men’s final in the BNP Paribas Open at the Indian Wells Tennis Garden. 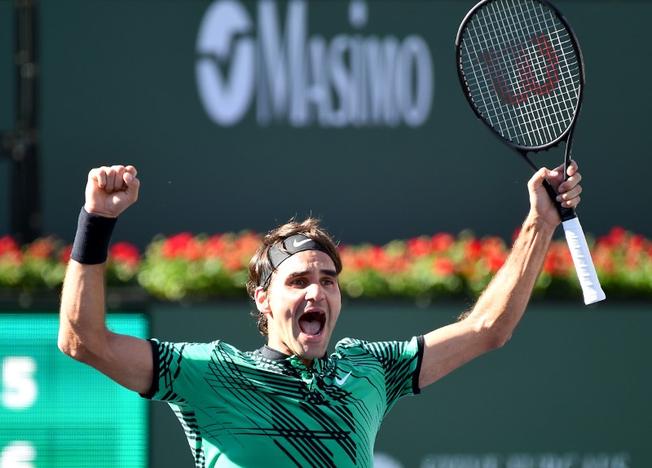 A revived Roger Federer beat fellow Swiss Stan Wawrinka 6-4 7-5 in the BNP Paribas Open final on Sunday to earn a record-tying fifth Indian Wells title and distinction as the tournament’s oldest winner.The win by the 35-year-old Swiss master, who made a stunning return from a six-month layoff by winning the Australian Open in January, capped an impressive run in the California desert in which he did not lose a set the entire way.

The rematch of the Australian Open semi-final saw the close friends hold serve until the 10th game of the opening set when Federer, ahead 5-4, outlasted Wawrinka in a thrilling 21-shot rally for the service break.

Wawrinka, who was making his first appearance in an Indian Wells final, broke right back and held serve to move ahead 2-0 in the ensuing set but Federer never wavered.

Federer now joins Novak Djokovic a five-time winner at the event and becomes the oldest champion in the tournament’s history, surpassing Jimmy Connors who was 31 when he triumphed in 1984.

Roger Federer (born 8 August 1981) is a Swiss professional tennis player who is currently ranked world No. 10 by the Association of Tennis Professionals (ATP). Many players and analysts have called him the greatest tennis player of all time. Federer turned professional in 1998 and was continuously ranked in the top 10 from October 2002 to November 2016.

Federer has won 18 Grand Slam singles titles, the most in history for a male tennis player, and held the No. 1 spot in the ATP rankings for a total of 302 weeks. In majors, Federer has won seven Wimbledon titles, five Australian Opentitles, five US Open titles and one French Open title. He is among the eight men to capture a career Grand Slam. He has reached a record 28 men’s singles Grand Slam finals, including 10 in a row from the 2005 Wimbledon Championships to the 2007 US Open.

Federer’s ATP tournament records include winning a record six ATP World Tour Finals and playing in the finals at all nine ATP Masters 1000 tournaments. He also won the Olympic gold medal in doubles with his compatriot Stan Wawrinka at the 2008 Summer Olympic Games and the Olympic silver medal in singles at the 2012 Summer Olympic Games. Representing Switzerland, he was a part of the 2014 winning Davis Cup team. He was named the Laureus World Sportsman of the Year for a record four consecutive years from 2005 to 2008.

Federer played in the Hopman Cup and Australian Open in January 2017. At the Australian Open, he beat top-10 players Tomáš Berdych and Nishikori to reach the quarterfinals, where he beat Mischa Zverev, making Federer the oldest man to compete in a grand slam semi-final since Jimmy Connors in 1991. In the semi-finals, he defeated Wawrinka in five sets, making him the oldest player to compete in a Grand Slam final since Ken Rosewall in 1974. Coming back from a break down in the fifth set, Federer defeated Nadal to win the Australian Open, which also marked Federer’s 100th match at the Australian Open; it was the first time Federer had won a match against Nadal in a Grand Slam event since the 2007 Wimbledon final. His victory against Nadal moved Federer to number ten in the ATP rankings,  and made him the oldest player to win a Grand Slam tournament since Rosewall in 1972.

LAMAR JACKSON SAY’S, NO AGENT, NO PROBLEM. I PLAY FOR PAY, AND I LIKE 100% OF MY EARNINGS, PLUS BENEFITS, “SMART MAN”. GUESS WHAT HAPPENS WITH OUT AN AGENT? NO LEAKS, NO WORRIES, JUST RESULTS

Just In From The Players Championship