Frank Layden On Michael Jordan: “He’s Got The Wrong Number On. It Should Be 007, He’s Got A Licence To Kill.” Layden’s career in the NBA roughly paralleled Jordan’s. He was head coach and general manager of the Utah Jazz from 1981-89, then served as team president for 10 more years. He retired from the NBA in 1999, a year after Jordan left the Bulls.

Michael Jeffrey Jordan (born February 17, 1963), also known by his initials MJ, is an American businessman and former professional basketball player. His biography on the official National Basketball Association (NBA) website states: “By acclamation, Michael Jordan is the greatest basketball player of all time.” He was integral in popularizing the NBA around the world in the 1980s and 1990s, becoming a global cultural icon in the process. Jordan played 15 seasons in the NBA, winning six championships with the Chicago Bulls. He is the principal owner and chairman of the Charlotte Hornets of the NBA and of 23XI Racing in the NASCAR Cup Series.

Jordan played college basketball for three seasons under coach Dean Smith with the North Carolina Tar Heels. As a freshman, he was a member of the Tar Heels’ national championship team in 1982. Jordan joined the Bulls in 1984 as the third overall draft pick, and quickly emerged as a league star, entertaining crowds with his prolific scoring while gaining a reputation as one of the game’s best defensive players. His leaping ability, demonstrated by performing slam dunks from the free throw line in Slam Dunk Contests, earned him the nicknames “Air Jordan” and “His Airness”. Jordan won his first NBA championship with the Bulls in 1991, and followed that achievement with titles in 1992 and 1993, securing a “three-peat“. Jordan abruptly retired from basketball before the 1993–94 NBA season to play Minor League Baseball but returned to the Bulls in March 1995 and led them to three more championships in 1996, 1997, and 1998, as well as a then-record 72 regular season wins in the 1995–96 NBA season. He retired for the second time in January 1999 but returned for two more NBA seasons from 2001 to 2003 as a member of the Washington Wizards.

Jordan’s individual accolades and accomplishments include six NBA Finals Most Valuable Player (MVP) Awards, ten scoring titles (both all-time records), five MVP Awards, ten All-NBA First Team designations, nine All-Defensive First Team honors (joint record), fourteen NBA All-Star Game selections, three All-Star Game MVP Awards, three steals titles, and the 1988 NBA Defensive Player of the Year Award. He holds the NBA records for career regular season scoring average (30.12 points per game) and career playoff scoring average (33.45 points per game). In 1999, he was named the 20th century’s greatest North American athlete by ESPN, and was second to Babe Ruth on the Associated Press‘ list of athletes of the century. Jordan was twice inducted into the Naismith Memorial Basketball Hall of Fame, once in 2009 for his individual career and again in 2010 as part of the 1992 United States men’s Olympic basketball team (“The Dream Team”). He became a member of the FIBA Hall of Fame in 2015.

One of the most effectively marketed athletes of his generation, Jordan is also known for his product endorsements. He fueled the success of Nike‘s Air Jordan sneakers, which were introduced in 1984 and remain popular today. Jordan also starred as himself in the 1996 live-action animation hybrid film Space Jam, and is the central focus of the Emmy Award-winning documentary miniseries The Last Dance (2020). He became part-owner and head of basketball operations for the Charlotte Bobcats (now named the Hornets) in 2006, and bought a controlling interest in 2010. In 2014, Jordan became the first billionaire player in NBA history. As of 2021, his net worth is estimated at $2.2 billion.

Yes, there were many people who expected Michael Jordan to rise to the heights that he did when he entered the league. Jordan was selected third overall in the 1984 NBA Draft. And while people thought he could be a great player in the league, it was surprising to a few how great he became. Jordan’s impact on the league was immediate, and within the first 4 years of his career, he established himself as one of the best players in the league.

Former Utah Jazz head coach Frank Layden was asked about Michael Jordan during a 1988 game between the Jazz and the Chicago Bulls. Layden hilariously noted that Jordan’s jersey number shouldn’t have been 23, but 007, because just like James Bond, he had a license to kill when he was on the basketball court.

“You see that Michael Jordan already has superstar status. He’s got the wrong number on. It should be 007, he’s got a license to kill.”

Layden was echoing the sentiments of almost everyone in the NBA at the time. Jordan was considered the most explosive offensive player in the league during that time. And whenever he was on the court, opposition players had to be on guard, because MJ could flip the switch and take over a game with his incredible offense at any point during the night.

Layden would be replaced by his assistant coach Jerry Sloan, who would build the Utah Jazz into a solid contender. Sloan, flanked by superstars John Stockton and Karl Malone, posed the biggest threat to Jordan and the Chicago Bulls during the final years of their dynasty. They faced the Bulls twice in the Finals in 1997 and 1998 but were vanquished both times by Michael Jordan in 6 games.

Layden’s career in the NBA roughly paralleled Jordan’s. He was head coach and general manager of the Utah Jazz from 1981-89, then served as team president for 10 more years. He retired from the NBA in 1999, a year after Jordan left the Bulls.

He was both NBA coach and executive of the year in 1984, the year Jordan was picked third overall in the draft by the Bulls. Frank had a pretty good draft, too. He took a future Hall of Famer named John Stockton with the 16th overall pick.

The Jazz were consistent winners in Layden’s time. Between that 1983-84 season and his final year as president in 1998-99, Utah made the playoffs 16 years in a row. They reached the NBA Finals in consecutive years in 1997-’98, losing in six games to Jordan and the Bulls both times.

Maybe Layden will take time to watch the last two episodes of “The Last Dance.” Then again, he might not want to be newly tormented by Jordan. His 88-year-old heart might not withstand another replay of Jordan pushing off Byron Russell before making the jumper to win the title in 1998.

“We should have beat them when he was playing baseball (in 1994-95),” Layden said. “We lost to Houston. We had them on the run once and Mark Eaton got hurt. We had a good solid team. Those were the good old days.”

Everyone lost to Jordan in those days. Patrick Ewing never won an NBA title because of him. Charles Barkley, same thing. Clyde Drexler, Chris Mullin, Reggie Miller. Stockton was a great pick, but Layden knew Chicago was getting something special when the third choice fell to them in ’84.

“I knew about Jordan,” Layden said. “One of my closest friends was Dean Smith. We were in constant contact. He told me, this guy is going to be the best player that ever lived. He said, ‘You know, he loves the game. He loves to practice. He’s a tough competitor.’

“People forget how good Jordan was on defense. He was a good athlete. So he could defend, he could pass, and he had a tenaciousness about him. I don’t think he would have tolerated load management.”

Layden, a master of the one-liner who was in high demand as a banquet speaker in his day, got a good laugh at that one. With his wife sitting next to him, he said there should be a statute of limitations on marriage.

He was fortunate to face Jordan only twice a year in an East-West crossover back in the day. So what was it like preparing for him, Frank?

“I tried to put my toughest guy on him,” Layden said, “and I said ‘Go out there and use all of your fouls.’ I remember I had a guy named Bobby Hansen, who was a very good player from Iowa. He’d go out there and I’d say, ‘Bobby, when you come back, have blood on your shirt.’

“So one night he came back and sure enough, I looked and he had some blood on his shirt. So I said, ‘That’s what I like, Bobby, you got blood on your shirt!’ He said, ‘Coach, it’s mine! This guy (Jordan) is beating the hell out of me.’”

Hansen, a 6-6 guard, finished his career in Chicago in 1992, the year Jordan and the Bulls won their second title.

“I remember Jordan telling me later on that was the best trade we ever made,” Layden said. “He said, ‘He was one of the toughest guys who guarded me my whole career.’”

Layden remembers trading Hansen to the Bulls. Actually, he traded him to Sacramento, who shipped him to Chicago. But hey, it’s still a good story. Frank still has a mind like a whip at age 88, and talking with him is one of the job’s great pleasures. 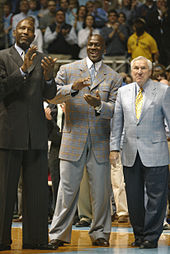 After his third retirement, Jordan assumed that he would be able to return to his front office position as Director of Basketball Operations with the Wizards. However, his previous tenure in the Wizards’ front office had produced mixed results and may have also influenced the trade of Richard “Rip” Hamilton for Jerry Stackhouse, although Jordan was not technically Director of Basketball Operations in 2002. On May 7, 2003, Wizards owner Abe Pollin fired Jordan as the team’s president of basketball operations. Jordan later stated that he felt betrayed, and that if he had known he would be fired upon retiring, he never would have come back to play for the Wizards.

Jordan kept busy over the next few years. He stayed in shape, played golf in celebrity charity tournaments, and spent time with his family in Chicago. He also promoted his Jordan Brand clothing line and rode motorcycles. Since 2004, Jordan has owned Michael Jordan Motorsports, a professional closed-course motorcycle road racing team that competed with two Suzukis in the premier Superbike championship sanctioned by the American Motorcyclist Association (AMA) until the end of the 2013 season.

Dawn Michelle Staley To Be The Head Coach Of The U.S. Women’s National Basketball Team Through 2020 Tokyo Olympics

KENDRICK PERKINS, THE SHUT DOWN CENTER OF THE BOSTON CELTICS, RETURNS, PARTICIPATES IN HIS FIRST TEAM SCRIMMAGE SINCE HIS INJURY