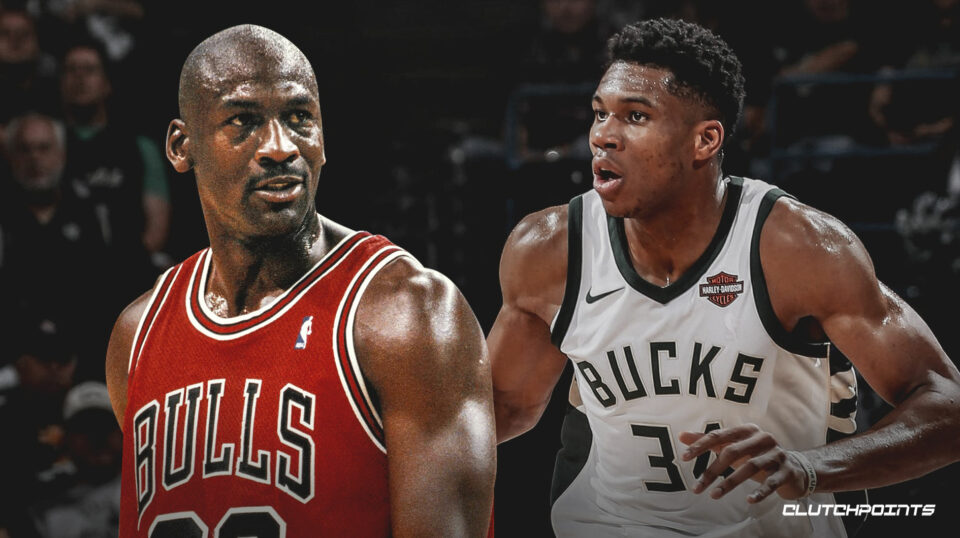 Michael Jordan, Giannis Antetokounmpo (Twitter)
Many people perhaps know that basketball legend Michael Jordan has six NBA championship rings. But what they might not know is that he reportedly is a savvy collector of watches.

The billionaire, Charlotte Hornets owner, and Hall of Famer is among a list of high-profile individuals to invest in WatchBox, which allows people to buy, sell, and trade luxury watches.

“Our investors and partners hail from a wide range of industries, from consumer to technology, finance and professional sports, yet we are all bound by our love of watches, Justin Reis, WatchBox Co-Founder and Global CEO, stated.

“When we founded WatchBox, our vision was to build a brand that would engender trust so that we could unite a passionate network of enthusiasts. With that foundation we are now able to use technology to create the best customer experience in the industry.”

Since its founding in 2017, WatchBox has reportedly pulled in $260 million. Though the firm did not disclose its latest valuation, people with insight of the business told CNBC that the company is drawing near to $1 billion. In CBNC interview on Monday,  Reis said the company is on pace for $300 million in net revenue this year, and could seek an IPO in the future, per World News Era.

WatchBox’s latest fund raise will proportedly be applied to reach new markets and scale its digital platform to revitalize its inventory selection. The inventory is now reputedly valued at $150 million.

“We are reshaping the way high-value luxury is transacted online,” Reis says.

“We built our proprietary concierge platform to enable efficiency and scale as we build personal connections with collectors around the world. We have an incredible group of dedicated people at WatchBox and, as we reach major milestones such as this one, I feel especially grateful to our team who have all contributed to our growth and success to date.”

Sportradar has generated ample revenue in the past several years and just launched an IPO on Tuesday. Early valuations suggest Jordan and Cuban stand to make some money, especially given Sportradar’s prevalence in sports betting.

Mark Cuban made his money as a tech-savvy businessman. It’s no surprise he saw an opportunity with Sportradar. But Michael Jordan has also gone to great lengths to diversify his portfolio.

The Hornets governor has invested in several different companies, including other tech brands such as Gigster. He’s become even savvier in spreading his wealth across different industries. One might expect Michael Jordan to expand beyond shoes, given Jordan Brand continues to churn out revenue like clockwork.

In any event, MJ joined Cuban in a $44 million funding round for Sportradar back in 2015. At the time, the company had already agreed to partnerships with the NFL and NHL, and its data information loomed especially large in fantasy sports.

“Sportradar is well-positioned to be a global force in the sports data business,” Mark Cuban told TechCrunch at the time. “Their data scientists are amazing.”

The investment has seemingly aged better and better over time. Sportradar was valued at close to $3 billion last spring, and the rise in sports betting has only heightened the company’s valuation.

Indeed, Sportradar launched an IPO on Tuesday. Jordan himself was even in attendance.

Michael Jordan made the trek to Wall Street on Tuesday as Sportradar prepared to launch its IPO.

Jordan rang the Opening Bell after the company made its listings on the NASDAQ, with shares selling anywhere between $25 and $28. Sportradar raised $513 million at the close of business on Tuesday, dropping its valuation from $8 billion to $7.4 billion.

The drop in valuation might seem discouraging. However, Sportradar experienced tremendous year-over-year growth.

According to Bloomberg, Sportradar reported $322 million in revenue during the first sixth months of 2021, up from around $226.7 million during the same period last year. The company lost a bit of profit, but that might not come as a surprise considering the cost of business and spending more to account for potential losses during the pandemic.

Perhaps the IPO will help galvanize the company. Bloomberg also reported that a $159 million “private placement” was set to occur with the IPO.

Michael Jordan and Mark Cuban stand to make some money

It’s unknown just how much Jordan and Cuban invested in the initial funding round and how much each might have invested in Sportradar since. The company’s IPO is also worth tracking for the remainder of the week.

Regardless, MJ and Cuban will likely make some money.

Sportradar has experienced tremendous year-over-year growth. The company has partnerships with just about every North American sports league and has a lot to offer betting platforms like DraftKings, FanDuel, and others.

Both Cuban and Jordan understand not all investments are winners. But the investment both made back in 2015 should pay some dividends in 2021.

Chicago Bulls GOAT Michael Jordan is, at this point, far more successful as a businessman. He set the standard by insisting on a heavy hand for his involvement with Nike and the Air Jordan line. And he continues to make shrewd investments in a diverse array of markets in and outside of sports.

Lately, he’s turned his gaze to emerging tech markets, and many wealthy current and former athletes are following his example.

Many of the wealthiest athletes, including Michael Jordan, are investing in the all-digital future of collectibles

Sports collectibles have always been big money, both as retail products and speculative assets. It’s no surprise that a who’s-who of athletes would invest money in the business side of the sports memorabilia space. What’s surprising is how willing they are to put big money into the strange new world of Non-Fungible Tokens (NFTs).

The Verge can explain, for the uninitiated. NFTs are, essentially, unique blockchain-based identifiers attached to things like pictures, videos, and other digital media. This is the technology behind the digital marketplace NBA Top Shot, which trades largely in short, notable clips of NBA action.

However, in a digital landscape where many of these clips can be viewed for free, is there really a solid business in selling authentication certificates for owning them? Investors seem to think so.

Yahoo Sports reports that NBA Top Shot is valued at $1.9 billion — a higher value than the average NBA team. Sports business reporter Joe Pompliano tweeted that an influx of cash from familiar names drove this valuation.

What is Dapper Labs?

How did Dapper Labs, founded in 2018, attract so much investor attention so quickly? MarketWatch reports that cutting deals directly with the NBA, and most recently the NFL, helped rapidly legitimize their blockchain product. More importantly, it didn’t take them long to prove their concept had consumer interest.

NBA Top Shot, as their flagship service, quickly made money from the consumer end alongside the early rounds of investment. NBA Top Shot has racked up $722 million in transactions since emerging in October 2020.

With an NFL version coming soon, growth appears assured in the short term. With these indicators, it’s no wonder that Jordan — worth $1.9 billion himself — is on board early.

Dallas Mavericks owner and Shark Tank judge Mark Cuban thinks the blockchain — the tech behind both NFTs and cryptocurrency — is here to stay. NFTs made a lot of noise in 2020, and cryptocurrency has proved the viability of blockchain tech for over a decade. Still, there are criticisms of the concept that could undermine its long term.

TechCrunch reports that Dapper Labs leverages Flow rather than Ethereum Blockchain for their NFTs. It’s somewhat user-unfriendly. But more importantly, it could trigger regulation from governments around the world. In part, this is because of the heavy energy drain associated with maintaining the blockchain.

The technology’s association with the wild west of cryptocurrency has already seen increasing government oversight and calls for an outright ban of the practice. Like any good investors, though, the same names involved in NFT and cryptocurrency investments are keeping their portfolios diversified.

NBA Top Shot is probably a bit more fun to keep up with, but most wealthy NBA names are smart enough to spread their money around.

MMA SPORTS UPDATE: ANDERSON SILVA IS CALLING OUT ALL POTENTIAL CHALLENGERS, TO INCLUDE: GEORGES ST. PIERRE TO BROCK LESNAR. HE STATES THAT HE’S READY TO RUMBLE IN THE JUNGLE, AT LEAST THA’S WHAT THE REPORTED SOURCES ARE SAYING, AND HE’S NOT DENYING ANY REPORTS.