Playing for the second time this season, Andreescu and Sakkari once again locked horns in a tense duel that was decided by just a handful of points. The duo faced off in the spring in the semifinals of the Miami Open, where Andreescu prevailed in a physically grueling 7-6(7), 4-6, 7-6(4) win. That match was filled with protracted rallies and variety, and both Sakkari and Andreescu seemed committed early to make their second meeting about high-octane offense.

“I told Tom and my team before the match that I’m prepared for 7-6 in the third,” Sakkari said. “Seriously, I never thought that with Bianca it would be like 6-4, 6-1 unless I played lights out tennis, hit winners left and right. But because she fights every single point, I knew that it was going to be a very tough match.”

Andreescu and Sakkari are BALLING through one set.@mariasakkari | #USOpen pic.twitter.com/cS01ic6rhg

Aside from an exchange of breaks, the first set was dominated by the serve. Andreescu broke early and built a 3-0 lead before Sakkari pulled things level, breaking at 2-4 to get back on serve. Points were kept short as both women barrelled towards an opening tiebreak, but Andreescu was able to keep the return pressure on the Sakkari serve. Andreescu faced just two break points in the opening set, but Sakkari faced five across four different service games. The Greek saved four of them to keep Andreescu at bay.

After an electric 21-shot exchange won by Andreescu to open the tiebreak, Sakkari double-faulted to give the Canadian the mini-break at 2-0. That’s all Andreescu needed, as she landed her first serve for the remainder of the tiebreak to take it 7-2 after 63 minutes. In a near-statistical dead-heat, Sakkari finished with 17 winners to 15 unforced errors, while Andreescu hit 16 winners to 16 unforced errors for the set.

Bianca Andreescu is POUNDING the ball.

She breaks back in the second set after winning the first. pic.twitter.com/D7lsivwgZv

“I think in the first set especially I was not going for my shots like I normally do,” Sakkari said. “I was a little bit not very confident with my groundstrokes. I said, Maria, if you want to win this match, you have to go for it. It’s better if you go for it and miss than just make balls, she hits winners.”

“I didn’t have the control of the match until middle of the second set. I felt like she was better than me, but then somehow I dug in and found a way to just turn things around. I was more brave after a certain point of the match, then got my energy level a little bit higher.”

Though the rallies grew more protracted in the second set, Andreescu and Sakkari continued to batter the ball to head to yet another tiebreak. Andreescu remained more successful in pressuring Sakkari’s serve, earning a break point at 4-4 and two break points in the 5-5 game. Each time, Sakkari stepped up to save them, getting the better of Andreescu in two nine-shot rallies and earning a return error on another.

Turning Point: Looking to win her first tiebreak in four tries against the World No.7, Sakkari dug in her heels. After exchanging a pair of early mini-breaks, Sakkari prevailed in a 20-shot exchange to earn a 3-1 lead and was the beneficiary of two forehand unforced errors to earn set points at 6-3. Andreescu leveled to 6-6 with a miraculous hook smash that kissed the sideline, much to Sakkari’s disbelief, to come within two points of the win. But the Greek rebounded immediately to close out the 86-minute set, 8-6 in the tiebreak.

“I’m deadly honest, she was luckier than me in some parts of the match,” Sakkari said, when asked about her reaction to the sideline winner at 5-6. “She had many net calls, line calls as well. But I just said you cannot lose the match because you’re unlucky. Just try. I’m trying to be calm, not lose my mind. I want to live this experience, this tennis experience, until I’m done. I don’t want to look back and say that I did not enjoy matches like today.

“I mean, there was a decent crowd staying until 2:30 at night. I said, Maria, you cannot give up. Just stay focused and stay calm and just make balls.”

Andreescu broke Sakkari immediately in the final set to 2-0, but Sakkari responded immediately with a break at love in the next game. After holding serve to 3-2, Andreescu took an off-court medical timeout and returned with her upper left leg taped. On the resumption, Sakkari fired a service winner and three clean strikes off the ground to hold at 15 and level the decider at 3-3.

With Andreescu physically struggling, Sakkari played a disciplined return game to break to 4-3. With the break in hand, Sakkari closed out the match with a break, converting on her fourth match point to advance to her first US Open quarterfinal.

MARIA SAKKARI IS INTO THE QUARTERFINALS pic.twitter.com/wK8ITD3pPs

Stat of the Match: Sakkari saved 8 of 12 break points in the match and finished with 46 winners to 40 unforced errors.

Sakkari on being brave: “It’s something that I’ve been working with Tom since end of last year. But I felt like I lost that bravery after the French. I was more hesitant. I was not going for it so much. After my loss with Angie [in Cincinnati], I just practiced for two weeks. I had some very tough practices where I was crying because I could not feel my shots, I could not feel my tennis. But thankfully I had Tom and Yannis, my hitting partner, that supported me a lot.

“I lost my identity. That’s how I called it. I lost myself, part of myself. With my psychologist, as well, I found a way to come back and feel again what I felt out there today. By telling myself to be more brave, it’s not like, Maria, now be brave, and you’re brave. It’s just a process in practice and everything that has helped me to be more brave.”

Next up: Sakkari will face No.4 Karolina Pliskova for a spot in her second Slam semifinal of the season. The two have split their two previous matches, which both came on the clay in Rome.

Maria Sakkari is a Greek professional tennis player. On 17 May 2021, she reached a career-high singles ranking of No. 18. Her best WTA doubles ranking is 169, achieved on 9 September 2019.

Sakkari is known for her aggressive, all-court style of play, centered around her strong serve and powerful groundstrokes. Sakkari served the sixth most aces of any WTA player in 2020, with 144 aces served in 31 matches.

Sakkari powers past Kvitova to reach U.S. Open fourth round 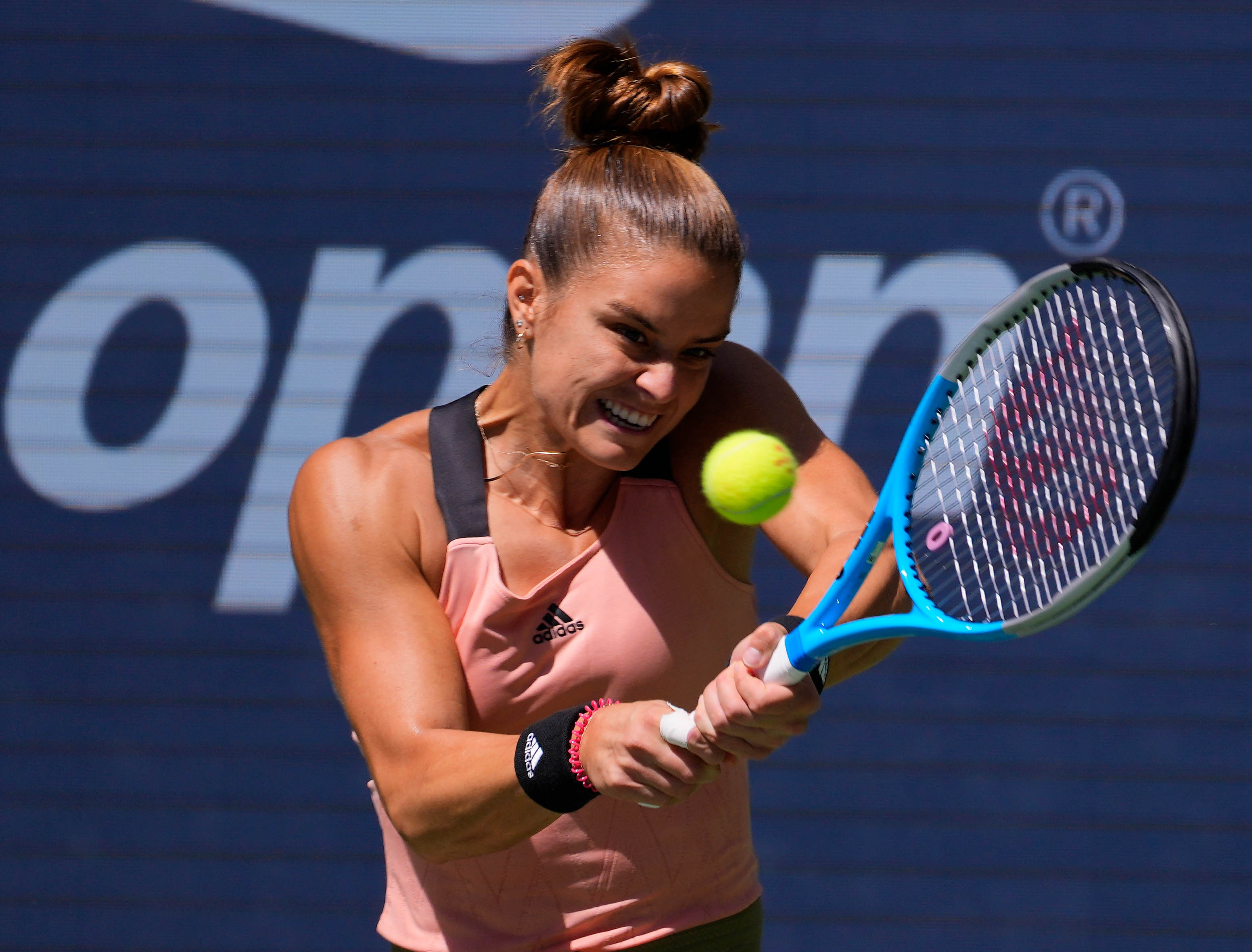 Maria Sakkari eliminated 2019 champion Bianca Andreescu in the latest-finishing women’s match in tournament history to reach the US Open quarterfinals for the first time.

Sakkari came back to win 6-7 (2), 7-6 (6), 6-3 early Tuesday morning as Andreescu had trouble with a left leg that was taped by a trainer during a medical timeout in the third set. Andreescu limped around between points down the stretch and her leg buckled a few times.

“I hope you will not be late for work tomorrow,” Sakkari told those fans who stayed until the end. “Go get some sleep and I’ll see you in two days.”

Both players’ grunts reverberated off the thousands of unused blue seats in Arthur Ashe Stadium by the end. Fans who remained engaged in dueling first-name chants: “Ma-ri-a!” and “Bi-an-ca!”

This was Andreescu’s first loss in the main draw at Flushing Meadows. She beat Serena Williams in the final to win the title in her debut two years ago and missed the hard-court Grand Slam tournament in 2020 while sitting out the entire season with an injured knee.

Also securing a spot in the quarterfinals was Belinda Bencic. The Olympic gold medalist from Switzerland beat Iga Swiatek 7-6 (12), 6-3 to make the last eight in Flushing Meadows for the third time.

The 11th-seeded Bencic won the lengthy first-set tiebreaker, then took the second set in 43 minutes — only about 20 minutes longer than the tiebreaker lasted.

“The set was so even, so I think in the tiebreak it’s always a little bit about luck,” Bencic said.

Bencic was a semifinalist at the US Open in 2019, the last time she played. She also reached the quarterfinals in her debut in 2014.

Swiatek, the No. 7 seed from Poland who won last year’s French Open, was the only women’s player to reach the fourth round in every major this year.

The unexpected run of American Shelby Rogers is over. After upsetting top-ranked Ash Barty on Saturday, Rogers lost to British teen Emma Raducanu 6-2, 6-1.

Raducanu, 18, has gone all the way from the US Open qualifying rounds to the quarterfinals. She joins fellow teenager Leylah Fernandez in the women’s last eight.

Raducanu reached the fourth round at Wimbledon and has gone a step further in the year’s last Grand Slam tournament, becoming just the third female qualifier to reach the US Open quarterfinals in the professional era.

Rogers jumped to a 2-0 lead before Raducanu won the next 11 games.

Raducanu will next face Bencic with a spot in the semifinals on the line.

“Belinda is a great player who’s in great form, so I know I’m going to have to bring it on Wednesday,” Raducanu said.

Information from The Associated Press was used in this report. 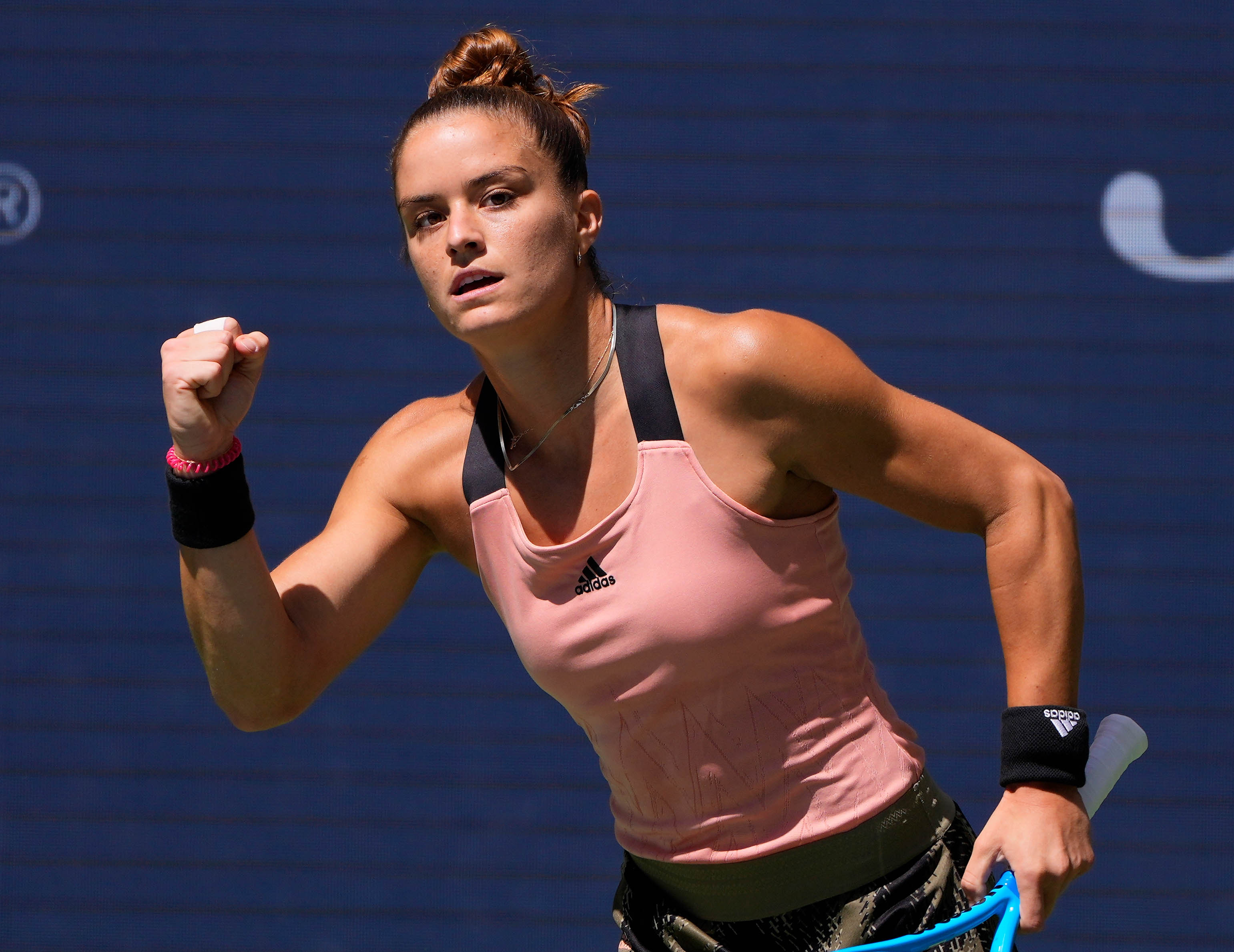 Greek Maria Sakkari dismantledthe defences of twice Grand Slam champion Petra Kvitova to win 6-4 6-3 to reach the fourth round of the U.S. Open on Saturday.

The 17th seed relied on her powerful serve once again, winning all but one of her first-serve points in the opening set and firing off nine aces in the match on Arthur Ashe Stadium.

In the second set, her Czech opponent dropped serve in the first game but refused to go quietly, fending off seven break points – including two in the third game to hold – but could not match the power of Sakkari, who struck 13 winners in the set.

“I think my serve was probably my biggest weapon today and of course playing in front of this crowd was unbelievable,” said Sakkari, who lost to Serena Williams in a fourth-round, three-set thriller a year ago in front of empty stands.

“It’s always tough to play against Petra, because she hits very hard, probably the hardest on the tour,” she added. “I’m very pleased with the way I served, the way I returned, and my attitude on court.”

The Roland Garros semi-finalist next faces sixth-seededCanadian Bianca Andreescu, who is looking to recapture the magic of her successful 2019 U.S. Open after missing the 2020 season due to injury and the challenges of competing in the pandemic.

“She can do everything on the court. She can hit hard, she can play high balls, can slice, can dropshot,” said Sakkari. “She’s experienced because she has won big tournaments.”

Sakkari lost in their only previous meeting, a hard-fought, three-set semi-final in Miami in April.

“Bianca is one of the toughest players to play on the tour, and I’m prepared that it’s going to be a very, very tough match for both of us,” Sakkari said.

“I’m just going to stick to what I’m doing good right now and stay with the same mindset.”

P.J. Tucker’s free agency IS the next contest for the Milwaukee Bucks. “THE UNSUNG HERO OF THE 2021 PLAYOFFS”, AND CHAMPIONSHIP WIN FOR THE MILWAUKEE BUCKS IS, MR P.J. TUCKER. LET’S PUT SOME RESPECT ON THAT NAME, AND SOME DOLLAR BILLS (3YR 45MILLION), HE’S EARNED IT!!!! LET’S GIVE THE SHUTDOWN NBA DEFENSIVE GURU SOME LUV