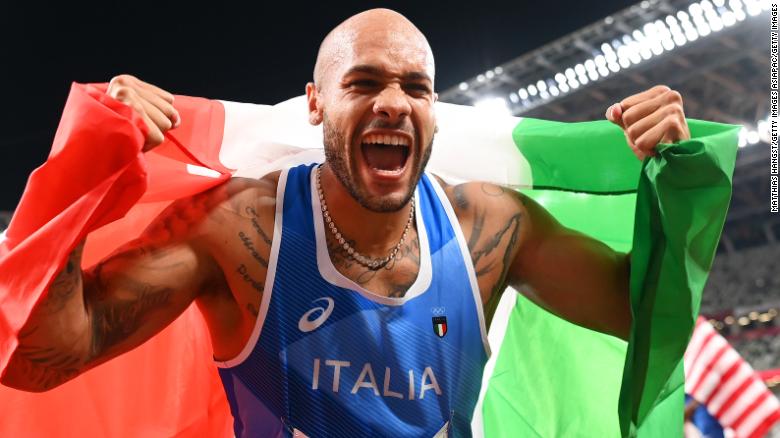 The Olympic Stadium, Tokyo (CNN)Italy’s Lamont Marcell Jacobs set a new European record as he claimed a shock victory in the men’s 100m at the Tokyo Olympics.

Jacobs’ winning time of 9.79 seconds on Sunday saw him finish 0.05 seconds ahead of the USA’s Fred Kerley in second and 0.10 seconds ahead of Canada’s Andre De Grasse in third.
It capped a glorious few minutes for Italy at the Olympic Stadium with Jacobs’ victory coming shortly after Gianmarco Tamberi’s gold medal in the high jump.
The two men embraced as Jacobs — the first Italian man to win 100m gold at the Olympics and the first European man to do so since Great Britain’s Linford Christie in 1992 — surged across the finish line.
“It was my childhood dream to win an Olympic Games, and obviously, a dream can turn into something different, but to run this final and win it is a dream come true,” said 26-year-old Jacobs.
“I want to thank my family that has always supported me, my children, and my mom, who has been my number one fan since I was a child, and my team who have followed me and those who support me.”
Jacobs takes victory in the men’s Olympic 100m final.
On a hot, humid evening in Tokyo where the temperature hovered around 30 degrees Celsius (86 degrees Fahrenheit), the race got underway in nervy circumstances when GB’s Zharnel Hughes was disqualified for a false start.
It proved to be a stroke of luck for Jacobs, who had the slowest reaction time out of the blocks — more than half a second — during the first start.
Jacobs, Kerley, and De Grasse all ran personal bests in the final, with De Grasse adding another bronze medal to the one he won at the Rio Olympics five years ago.
In the first men’s 100m final since three-time champion Usain Bolt retired from athletics, Jacobs — whose winning time was 0.01 seconds faster than Bolt’s in Rio — was an unlikely successor to the Jamaican. He had been competing in the long jump until as recently as 2017 before switching his focus solely to sprinting.

“I really didn’t know anything about him. It was my first time racing him at the Monaco Diamond League (in July),” Kerley later said of Jacobs. “He did a fantastic job (here).”

Jacobs (left) and Tamberi embrace after the men’s 100m final.
Kerley had finished third at the US Olympic trials in June behind Trayvon Bromell — billed as the favorite to win the 100m title ahead of the Olympics — and Ronnie Baker. However, Bromell was unable to qualify for the final in Tokyo and Baker finished fifth behind South Africa’s Akani Simbine.
“I executed the race perfectly and I came up with a silver medal. I can’t complain,” said Kerley.
“The race was a beautiful race. I got a PB (personal best) and a silver medal. I am blessed to be at the biggest stage of my career.”
On an incident-filled evening in Tokyo, Tamberi shared the men’s high jump gold medal with Qatar’s Mutaz Essa Barshim. The two men had identical records after clearing 2.37 meters in the final, but neither was able to clear 2.39.
Shortly before that, Venezuela’s Yulimar Rojas smashed the women’s triple jump world record by 17 centimeters, sealing the gold medal with a distance of 15.67 meters.

Usain Bolt would not recognize what went down on the Olympic track he used to own.

On the night of the 100-meter gold medal race that once belonged to the Jamaican superstar, a Texas-born Italian with a deeper history in long jumping than outdoor sprints won the race that has long defined Olympic royalty.

At the Tokyo Olympics, Lamont Marcell Jacobs is The World’s Fastest Man.

The Italian crossed the line in 9.8 seconds Sunday night, the first medal ever for the country in the 100 meters. Pietro Mennea won the 200 in 1980 and Livio Berruti won that race at the 1960 Games in Rome.

Even in a race with no clear favorites — American Ronnie Baker was a candidate and China’s Su Bingtain ran a shocking 9.83 in the semis — Jacobs was a surprise.

“I really don’t know anything about him,” Kerley said of the new gold medalist. “He did a fantastic job.”

Tamberi, writhing on the ground, kicking his feet up in jubilation after his crazy win, was a man in need of someone to hug.

He found him when Jacobs, of all people, crossed the line first, and celebrated by jumping into the broad-chested sprinter’s arms and curling his own arm around Jacobs’ bald head.

They weren’t the only once celebrating the unexpected.

Earlier, Yulimar Rojas of Venezuela broke a 26-year-old world record in the triple jump with a leap of 51 feet, 5 inches (15.67 meters).

The day’s other gold medal went to Gong Lijao of China, who bested American Raven Saunders of the United States. Saunders, who is Black and gay, wears an “Incredible Hulk” mask when she competes, closed out the medals ceremony by lifting her arms above her head and forming an “X” with her wrists.

“It’s the intersection of where all people who are oppressed meet,” she explained.

The Jacobs victory came later and left everyone outside Italy — and maybe some in the country, as well — letting out a collective “Who?”

He was born in El Paso, Texas – the son of an American father and an Italian mother. He moved to Italy as a young boy when the U.S. military transferred his dad to South Korea. He was a long-jump specialist for years, and his biggest major running success came in an indoor 60-meter title at European champions earlier this year.

His personal best was an Italian record, 9.95 seconds, set in May. It was the first time he’d broken 10 seconds.

Now, he’s on the list with Jesse Owens, Carl Lewis and Bolt — an Olympic 100-meter champion.

His path was made that much easier when American Trayvon Bromell, who came into Tokyo with the world’s leading time and as the odds-on favorite, didn’t even make the final.

Bromell ran his semifinal heat in 9.996 seconds to finish third, and said “I’m not really sure what I could’ve done better, but the race went the way the race went.”

Lamont Marcell Jacobs Jr. (born 26 September 1994) is an Italian male sprinter and long jumper. He won the 60 m title during the 2021 European Athletics Indoor Championships. On 1 August 2021, Jacobs set a new 100 m European record with a time of 9.80 at the 2020 Olympics, winning the gold medal in the process. He is the first Italian to win the 100 m Olympic title.

Son of an Italian mother and an African American father, a United States Army soldier serving at Caserma Ederle in Italy, he was born in El Paso, Texas, where he spent only his first month. When his father was transferred to South Korea, he moved to Desenzano del Garda with his mother. He began competing in athletics there at the age of ten, initially preferring sprinting, then discovering the long jump in 2011. He later moved to Rome, where he lives with his partner Nicole and his two children, Anthony (born 2019) and Megan (born 2021). Jacobs has a son, Jeremy (born 2013), from a previous relationship when he was 19.

In 2016, Jacobs won the Italian Athletics Championships in long jump. With a personal best of 8.07 m, he ranked at tenth place on the IAAF world leading list at the end of the 2017 indoor season. At the 2016 Italian U23 Championships he jumped 8.48 m, the best performance for an Italian, although this result cannot be recognized as a national record due to the wind in favour of 2.8 m/s (the regulation limit is 2.0 m/s).

When questioned about his origins, he said he feels 100% Italian, admitting he is not very good at speaking English.

PITTSBURGH Steelers HEAD COACH Mike Tomlin: Dwayne Haskins ‘ WAS in command’ in preseason opener. MYBOYSAY’S NFL ENTHUSIASTS SAYS, DWAYNE HASKINS IS THE NEW STARTER FOR THE STEELERS, WHEN THEY PULL BEN R., AND IT WILL HAPPEN.

Mikhail Prokhorov, of Russia has purchased the majority ownership of the New Jersey Nets, The Commisioner says it’s a great day for the NBA’s international Global Initiative

Brandon Marshall Going To The Dolphins