Carmichael was selected to the NFL 1970s All-Decade Team by voters of the Pro Football Hall of Fame. From 1973 to 1983, Carmichael led all NFL receivers in receptions, receiving yards, and touchdowns. In 1987, he was inducted into the Eagles Hall of Fame.

When players from Historically Black Colleges and Universities (HBCU) were shut out from this year’s NFL draft for the first time in over a decade, Hall-of-Famer Deion Sanders – now the head football coach at Jackson State — was appalled.

“NEGLECTED AND REJECTED,” he tweeted.

The caps are his, not mine. And they reflect his outrage that, among 259 players drafted, not one was from an HBCU program. But Sanders wasn’t alone. Plenty of others joined the outcry, including former Grambling State quarterback Doug Williams, the first African-American quarterback to win a Super Bowl.

He called it “a travesty.”

Well, now you can add newly-minted Hall-of-Famer Harold Carmichael to the chorus. A walk-on at Southern University, Carmichael was a four-year starter at wide receiver before the Philadelphia Eagles made him a seventh-round draft pick in 1971 – a year when 55 HBCU players were chosen.

“It’s very, very troublesome to me to see that happen,” Carmichael said Tuesday on a conference call with the Pro Football Hall of Fame. “Back in the late ‘60s, early ‘70s, a lot of the big-time ballplayers were coming out of the HBCU teams.”

He’s right about that. Walter Payton was one. Mel Blount was another. So was Donnie Shell. And Art Shell, Willie Lanier, Deacon Jones, Willie Davis, Emmitt Thomas, Jackie Slater, Willie Brown, Charlie Joiner … and Harold Carmichael. All played on HBCU teams, and all are in the Pro Football Hall of Fame.

But that was then, and this is now. And now the number of HBCU players entering the NFL through the draft is down to a trickle, with Tennessee State tackle Lachavious Simmons the last HBCU draft pick. The Chicago Bears chose him in the seventh round of the 2020 draft with the 227th selection.

So what happened? Nobody is certain, though the COVID pandemic that canceled the 2020 season for most HBCU programs is offered as an explanation. Players simply didn’t have an opportunity to showcase their talents.

And that’s a shame because the talent is there. In 2017, for instance, the Houston Texans took Alabama State tackle Tytus Howard with the 23rd pick. One year later the Indianapolis Colts’ made South Carolina State linebacker and future All-Pro Darius Leonard a second-round choice. Moreover, according to the Washington Post, during the 2020 NFL season there were 29 HBCU players who started.

“I was really sad to hear the past couple of weeks about no HBCU players drafted in this year’s draft,” Carmichael said. “There are a lot times when a lot of the guys from HBCU teams fall through the cracks. There are a lot of good football players there, but I don’t think a lot of NFL football teams really respect that.

“They send guys there, but the guys wink at it and they go home, not really putting a lot of focus on the players. I’ve watched a couple of the HBCU games the past season, and you see some good ballplayers there. But people just want to go to the big schools.”

Carmichael didn’t, and look what happened. He’s part of the Hall’s Centennial Class of 2020. He’s also part of a fraternity of HBCU supporters who believe this year’s shutout is more an aberration than a trend and that HBCU rookies will make an impact this season and the years beyond – draft or no draft.

Lee Harold Carmichael (born September 22, 1949) is an American former professional football player who was a wide receiver in the National Football League (NFL) for 13 seasons with the Philadelphia Eagles (1971–1983) and one season for the Dallas Cowboys (1984). Carmichael was the Director of Player Development and Alumni for the Eagles from 1998−2014, and a Fan Engagement Liaison from 2014−2015, before retiring again in 2015.

Carmichael attended William M. Raines High School in Jacksonville, Florida, where he played the trombone in the school’s band. He began playing quarterback on the football team.[1]

He walked-on at Southern University and became a tri-sport athlete. He used his 6’8″ height to play on the basketball team as a center, and threw the javelin and discus for the track and field team. In football, he shifted to playing wide receiver, where he was a four-year starter, although he never led the team in receptions. He received All-conference honors as a senior. He was a teammate of Mel Blount.

“I love to catch the ball too much to fall back. For me, there’s nothing as great as catching the football. I feel like every time the ball is thrown my way, I’ll do whatever it takes to catch it, even if I have to tear it right out of a defensive back’s hands.”

“I love to catch the ball too much to fall back. For me, there’s nothing as great as catching the football. I feel like every time the ball is thrown my way, I’ll do whatever it takes to catch it, even if I have to tear it right out of a defensive back’s hands.”

Harold Carmichael played 14 seasons in the National Football League. He was a seventh-round pick out of Southern University in the 1971 NFL Draft by the Philadelphia Eagles where he spent 13 seasons. His final season in the NFL was spent with the Dallas Cowboys.

During just his third season, Carmichael recorded a career-high and team record at time with 67 catches for 1,116 yards to lead NFL in receptions and receiving yardage in 1973. This included a personal best 12 catches for 187 yards against the St. Louis Cardinals on Oct. 14, 1973.

Carmichael was a key member of Eagles teams that earned four straight playoff appearances from 1978-1981. He scored a career-best 11 touchdown receptions during the 1979 season. Carmichael registered 40 or more catches in nine straight seasons, eclipsed the 1,000-yard mark three times and had 20 games with 100 or more receiving yards during his career. Carmichael led the Eagles in receptions and receiving yardage seven times and established a then-NFL record of 127 straight games with a reception from 1972-1980.

A true leader, Carmichael helped Philadelphia to a division title and the franchise’s first Super Bowl appearance in 1980. At the time of his retirement, Carmichael was the Eagles’ all-time leader in games played, consecutive games played, touchdowns, receptions, receiving yards and touchdown receptions.

Jerry Rice believes he would have been able to double his insane statistics under the current NFL rules. Harold Carmichael isn’t sure if he would have ever played an NFL game.

A member of the centennial class of 2020 set to be enshrined next month, Carmichael waited decades to finally earn the call to the Pro Football Hall of Fame. The Philadelphia Eagles legend may not have gotten the opportunity if the current iteration of NFL rules existed in 1971 (his rookie season).”I wondered to myself if I would have been drafted,” Carmichael said in a conference call ahead of his enshrinement Tuesday. “I wondered if they were looking for those 4.2 (40-yard dash) guys and I was nowhere near that.”A seventh-round pick in 1971 out of Southern University, Carmichael made a name of himself in the NFL with his 6-foot-8 frame — a nightmare for NFL defensive backs for over a decade. Carmichael owns every major receiving record in Eagles franchise history, ranking first in receptions (589), receiving yards (8,978), and touchdowns (79). He also caught a pass in 127 consecutive games from 1972 to 1982, which was an NFL record until Steve Largent broke it in 1986.Prior to the illegal contact rule — which was put in place in 1978 and restricted contact beyond five yards downfield — Carmichael relied on other aspects of the game to survive in the NFL. Size mattered in the 1970s.“I had to make good with my size and put myself between the football and the defensive player and that’s how I kind of got around that speed,” Carmichael said. “I tried to catch anything within three yards of me and used my long arms and cut the 4.6 to 4.5 (40-yard dash time) because of my height.”Carmichael’s numbers certainly improved once the illegal contact rule was added, having 216 catches for 3,787 yards and 34 touchdowns from 1978 to 1981. He ranked in the top 10 in the NFL in all three categories, including having the second-most touchdown receptions in that span. The prime of Carmichael’s career benefitted with the illegal contact rule, even through he credits what he learned in his early years for getting him to that point.“The way I was raised in football, intimidation was part of the game,” Carmichael said. “Any type of way you could intimidate an opponent, that was a plus. If you can get in his head and slow him up even if he (the defensive back) might be faster and plays the position very well, you can get in his head so many different ways.“You could either try to knock him down, blocking him, running patterns on him and scoring touchdowns — some kind of way just to get in his head,” Carmichael added.When Carmichael’s NFL career ended, he was fifth in NFL history in catches, seventh all-time in yards, and tied for sixth in touchdowns. Carmichael led all NFL wide receivers in receptions (549), receiving yards (8,414), and receiving touchdowns (77) from 1973 to 1983.Under the modern NFL rules, Carmichael would have been overlooked — similar to the years following his Hall of Fame career. Carmichael had to wait three decades to get into the Hall of Fame — and is certainly grateful the NFL didn’t attempt to benefit offensive players when he was learning how to play in the league. 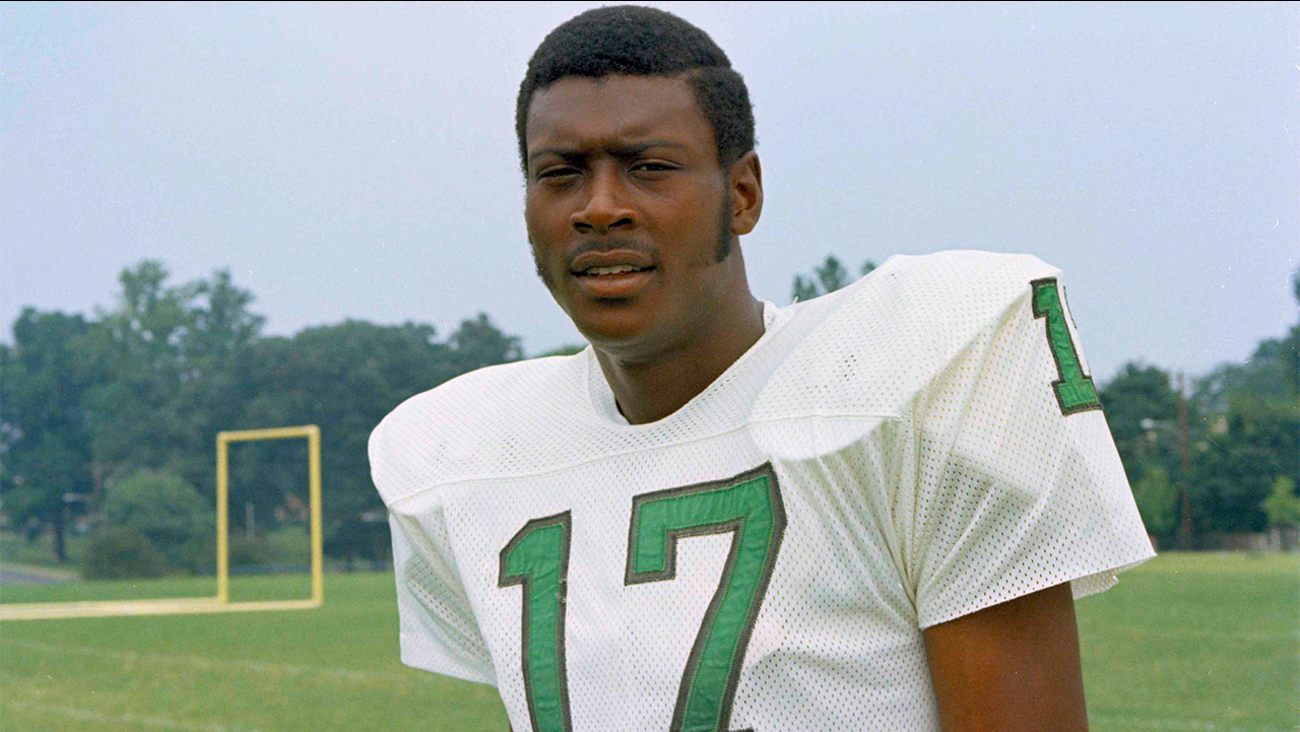 Harold Carmichael (17) wide receiver for the Philadelphia Eagles, is shown in 1973.

ROGER CLEMENS, ONE OF THE GREATEST PITCHERS IN BASEBALL HAS BEEN ATTACKED, THEY’VE HIT BARRY, AND THEY WANT CLEMENS ALSO. WHEN WILL IT END. CLEMENS, BARRY, TWO OF THE GREATEST IN THEIR POSITIONS HAVE BEEN DISCREDITED BY THE MEDIA. THIS STEROID THING MADE MILLIONS FOR THE SPORTS WRITERS, THEY WROTE AND SOLD BOOKS OFF THE BACKS OF THESE GREAT PLAYERS, BUT, THEY NEVER PUT FANS IN THE SEATS OF THE STADIUMS OF THE MLB, THEY NEVER PLAYED IN THE MLB, BUT THEY WERE ALLOWED TO APPRECIATE FROM THEIR RUMOR MILL COMMENTS THAT BECAME REAL, BASED ON THEIR REPORTING OVER THE YEARS. IS THIS FAIR?

PLEASE SUPPORT OUR SPONSORS AND ADVERTISERS, TOO INCLUDE: