Porsche to set up joint venture with German battery maker

Porsche is setting up a new factory for battery cells, called Cellforce, in Tübingen, Germany. The plant will be run as a subsidiary of Porsche in a joint venture with Customcells and will develop cells that use silicon as opposed to graphite for the anode material.

“We already started within research and pre-development to build up know how and knowledge about cell chemistry, and the company Cellforce Group will have around 60 engineers in development and about 20 in production; the main focus, at least in the beginning, is to take care about the development of the cell and cell chemistry,” said Michael Steiner, member of the executive board, R&D at Porsche.

But unlike other recent battery factory announcements, the goal for Cellforce is high performance, not high volume.

“In terms of production, [it] will be small compared to all the gigafactories you know, so we are looking forward to have around 100 MWh a year as production capacity—it could be slightly more,” Steiner told Ars. “In terms of cars it should fit for, let me say, 1,000 cars a year. The kind of cells we look for are designed for motorsports and for high-performance derivatives of existing cars, so it’s a very tailored cell technology for high-performance solutions,” he said.

“If this works, and we see potential to come down with cost if we scale up—and costs of sales have not only to do with the chemistry but also with the scaling—there might be a chance for higher volume, but this is not a task that I gave the team that has to start this new facility,” Steiner said.

Porsche is looking for gains in both gravimetric and volumetric energy density but also wants cells that can run hotter than current lithium-ion, like the cells found in Porsche’s Taycan. These currently use “low single-digit percentage” of silicon in the anodes, but Cellforce wants to increase this to 50 percent if possible.

“Today’s cell chemistry is able to [operate at] 50˚ C, maybe slightly higher, and we are looking for temperatures above 70˚ C that support superfast charging but also superfast driving,” Steiner said. (A downside to the new chemistry is that it doesn’t operate well below freezing, which is a problem for road cars but not for race cars.)

Porsche wasn’t ready to discuss exactly what race car might first use these new Cellforce cells, something that should happen around 2024. By that time, Porsche’s hybrid endurance racing program will be up and running alongside its Formula E team. But in both of these cases, the regulations don’t allow competitors to develop their own batteries, instead requiring everyone to use a spec battery pack.

listen); see below), is a German automobile manufacturer specializing in high-performance sports cars, SUVs and sedans. The headquarters of Porsche AG is in Stuttgart, and the company is owned by Volkswagen AG, a controlling stake of which is owned by Porsche Automobil Holding SE. Porsche’s current lineup includes the 718 Boxster/Cayman, 911, Panamera, Macan, Cayenne and Taycan.

Porsche to set up joint venture with German battery maker 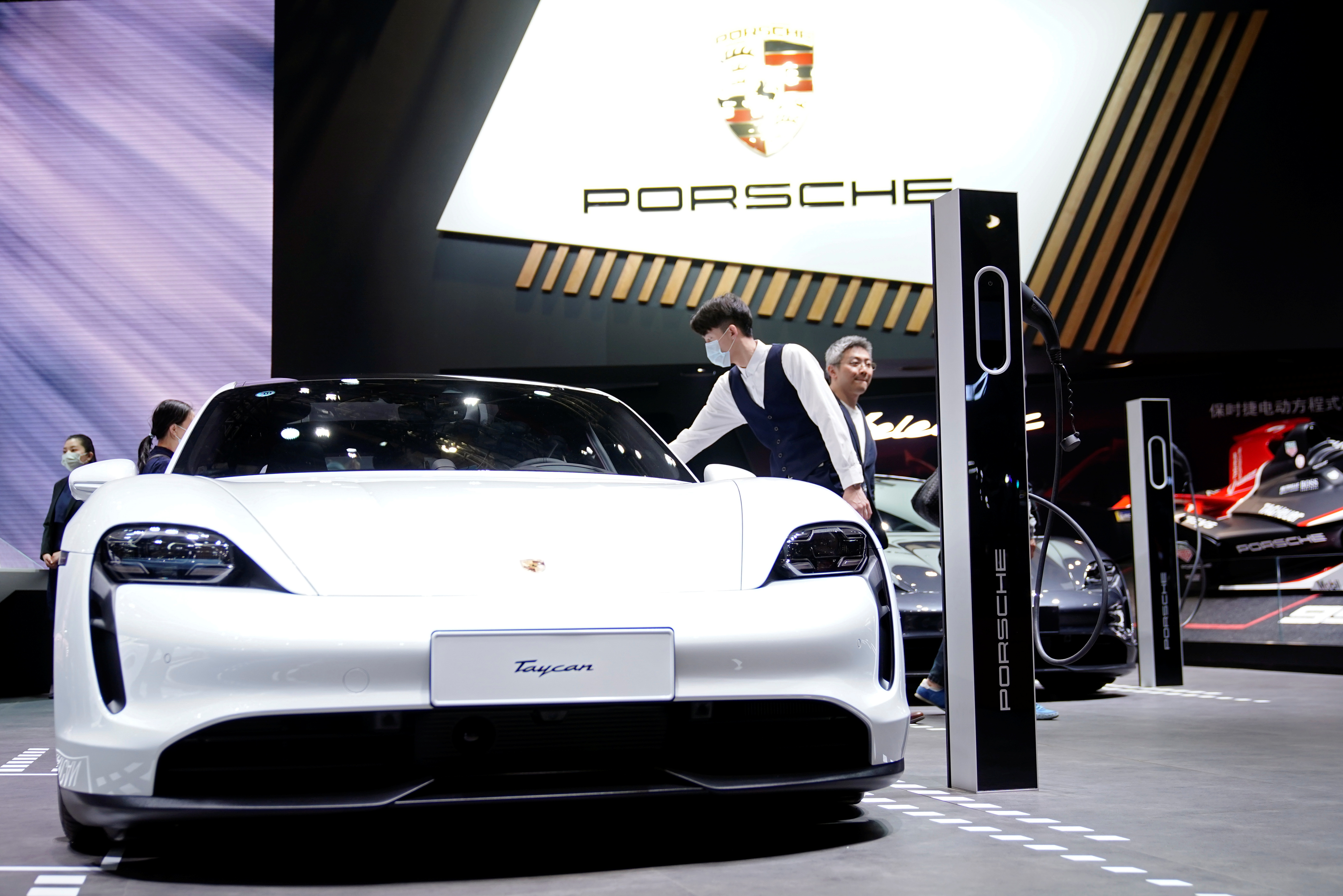 A Porsche Taycan electric vehicle (EV) is seen displayed during a media day for the Auto Shanghai show in Shanghai, China

The partnership with Customcells, a company in southern Germany specialising in lithium-ion cells, will aim to produce car batteries with higher energy density than prototypes used in Porsche’s current electric cars, the company said in a statement.

European carmakers are pushing to reduce their dependence on Asia for batteries as they roll out all-electric models to meet stricter emissions targets in the European Union.

Porsche said it will invest a high double-digit million euro sum in the joint venture in which it will hold 80%.

The production facility aims to have a capacity of 100 kilowatt hours, which will translate into about enough batteries for 1,000 cars a year.

Porsche Chief Executive Oliver Blume said in April the company wanted to speed up its e-mobility drive with plans for a German factory in Tuebingen to manufacture battery cells. At that time he did not say if Porsche would seek a joint venture partner.

Customcells is based in Tuebingen.

Porsche’s parent company Volkswagen has said it plans to build half a dozen battery cell plants across Europe and expand infrastructure for charging electric vehicles globally.

HEY GOLF WORLD, “THE TIGER HAS SPOKEN”, “THE WOODS FACTOR IS IN PLAY”. WILL THE MAN OF THE GOLF WORLD HIT THE GREENS RUNNING? WILL HE COME IN AND DOMINATE THE MASTERS? WILL HE WIN AT AUGUSTA IN 2010? WILL HE BE RECIEVED WITH OPENED ARMS? WILL THE MEDIA CONTINUE TO SCRUTINIZE HIS EVERY MOVE?