‘Got back to my roots’: Nia Dennis and the groundbreaking genius of #BlackExcellence

Nia Dennis placed her hands on her hips as she sashayed onto the floor. Her shoulders were relaxed. Her chin was held high above a glamorously decorated blue leotard with jewels covering her collarbone like layers of diamond necklaces.

After weeks of planning and practicing, the UCLA senior gymnast was finally ready to unveil her latest floor creation. She was nervous and excited. But with a medley of songs from influential Black artists ready to blare over the speakers, she was also proud.

Years ago, there were moments when Dennis, then a promising Olympic hopeful, wished she wasn’t Black. She wished her hair didn’t stick up. She wished the white chalk she used at practice didn’t show up on her skin as much. She wished she fit in.

Standing on the floor with her hand over her heart waiting for the music to begin, Dennis was ready to stand out more than ever.

“I got back to my roots,” Dennis said. “I know who I am as a woman and a Black woman at that.”

That woman celebrated Black culture in a 90-second floor routine that took over social media with more than 10 million views in the first weekend. Her score of 9.95 clinched UCLA’s season-opening win on Jan. 23 against Arizona State as she whipped her black ponytail through sassy dance breaks then refocused for effortless full-twisting front flips and soaring double backflips. Her teammates and coaches served as the ideal, socially distant backup dancers.

“Now that’s what I call fierce,” the former First Lady wrote on Twitter. “You’re a star!”

With her second viral floor routine in as many years, Dennis made another appearance on “The Ellen DeGeneres Show,” and did interviews via Zoom on “The Today Show” and NBC. When retired NBA star Dwyane Wade introduced himself before asking a question on TNT’s “Inside the NBA,” Dennis sheepishly covered her face in disbelief.

Inspired by the Black Lives Matter protests that unfolded last summer, Dennis wanted to add her piece to the social justice conversation. Instead of leading chants at marches or holding a sign, the 21-year-old communicated with tumbling passes as sentences and dance moves as punctuation. The message was still perfectly clear.

A place for expression

“I aspire to inspire.”

BJ Das was the mastermind behind Dennis’ routine, but UCLA’s volunteer assistant coach and choreographer can thank Dennis’ father Casey for one critical element.

With Dennis and Das hoping to add step dancing into the routine, Casey, who pledged Phi Beta Sigma at Ohio State, put on his UCLA sweatshirt and boots and sent short clips for inspiration. The intricate dancing Dennis performs during Missy Elliott’s “Pass That Dutch” when she claps her hands and taps her chest while rocking forward and backward was taken from one of Casey’s videos.

Seeing the personal touch in the final product was “exhilarating” for Casey.

Casey, a pharmacist, pledged the historically Black fraternity while searching for a place to fit in at the large university. The Sigmas, along with being known for their signature “Sigma Nutcracker” step, were noted for social activities, community service and preparing members for entering life after college. 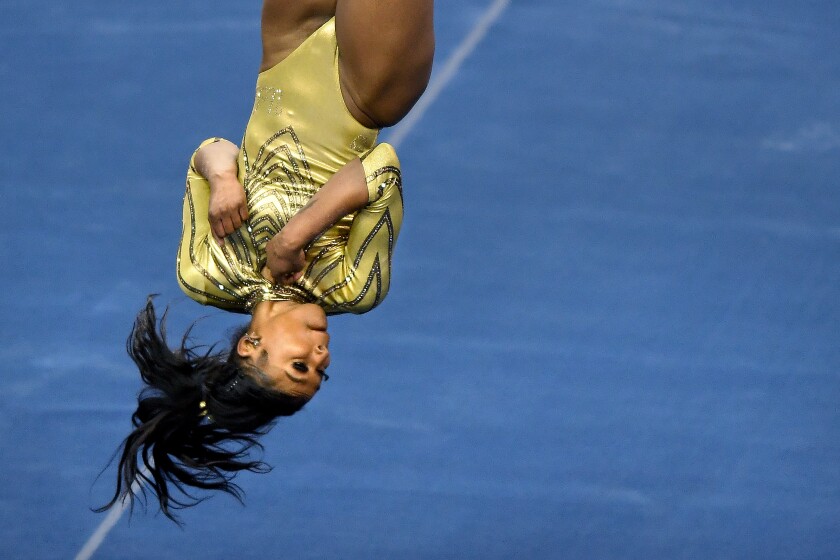 To Dennis, Greek life is a “form of unity in the Black community.” To Casey, it was a “support structure of like-minded people.” It allowed him to grow into the man he is today, Casey added.

His daughter, who started gymnastics at 4 years old, struggled to find the same place to express herself.

Gymnastics was her main social circle. Almost everyone she spent time with there was white. They made comments about her hair, asking to touch it. They pointed out how chalky Dennis looked at practice when the white powder gymnasts use to prepare their hands and feet to grip the equipment contrasted with her dark skin.

The statements weren’t meant with malice, but Dennis just wanted to stop being the topic of every conversation.

“A bunch of comments like that would always kill my confidence in who I wanted to be,” she said. “I’m not even going to pretend like I didn’t go through this phase when I was younger: I did used to want to be white.”

Dennis was sometimes dejected when she came home from practice, but her mother Deetra never missed an opportunity to tell her daughter she was beautiful. At the time Dennis thought Deetra was just saying what moms were supposed to say. Only after believing the words herself did Dennis realize the importance of having her mother’s influence.

Nia Dennis, on wanting to be an inspiration for her younger sister

Although she can’t speak during her routine, Dennis wants Black girls and women to feel those inspirational words when she performs.

“I aspire to inspire,” Dennis said.

Before she became a two-time viral sensation, Dennis was just trying to inspire those close to her, none more important than her younger sister. Mya, 11, brags to all of her friends that her older sister is so famous.

Dennis soars above her teammates’ heads in her first tumbling pass, tucking her knees toward her chest into a tight ball as she flips twice in the air. Her legs can power her more than eight feet in the air. They helped her win junior national titles on vault and floor in 2014. They were also sometimes the target of criticism.

With her muscular legs, Dennis was accused of not having “clean” lines in her gymnastics during her elite career, as if the curves of her muscles distracted from the perfect split of a leap or a straight handstand on the bar.

Like how NFL scouts have used stereotypes to evaluate players — white players are more often described as cerebral and hard-working while Black players tend to be described more on their physical attributes — gymnasts of color often fight against similar barriers.

“It seems that Black gymnasts are usually known for more power rather than grace,” said former UCLA gymnast JaNay Honest, who is Black. “Gymnastics is a subjective sport and there’s also this body type, which we’ve been trying to change the culture of it. You gotta be 90 pounds and thin and tiny … but obviously a lot of females are just not like that and specifically with Black women.”

A Pac-12 Networks reporter, Honest was on the broadcast for Dennis’ viral routine this year. At a meet in 2019, she interviewed former UCLA gymnast Kim Hamilton Anthony, who was the first African-American gymnast to receive a full scholarship to compete at UCLA. The six-time All-American and four-time national champion said she was told “gymnastics was a white girl sport.” People told her to give up.

“I’m so glad to know there are other athletes who look like me who can see my tape and I was able to go before them and pioneer in the sport,” Anthony said during the interview.

#TBT to 2019 and Emmy-winner @janayhonest‘s interview with legendary @UCLA_Alumni @RealKimAnthony about being a pioneer in the sport. #BlackHistoryMonth | #RepresentationMatters pic.twitter.com/C9YhkEua0A

Yet for every viral sensation in college gymnastics, there are still Black gymnasts facing discrimination within their own teams.

Black gymnasts from several schools including Alabama, Florida and UC Davis spoke to ESPN in 2020 about the racism they faced in the sport in the midst of the country’s racial reckoning following the George Floyd protests. White gymnasts used the N-word despite pleas from Black teammates to stop. One Alabama coach referred to a group of Black gymnasts standing together at practice as “the back of the bus.” The Black gymnasts were asked to overlook the incident as “a joke.”

Watching the protests unfold this summer was emotional for Dennis. She was frustrated, upset and angry to see the continued prevalence of racism, and especially police brutality. “I was honestly scared for my life,” Dennis said.

After UCLA’s season was canceled last year because of the pandemic, Dennis used the down time to undergo shoulder surgery to correct a torn labrum she was competing on for five years. While recovering, she couldn’t partake in marches or protests.

She would speak out on her own time.

Lyrics are not allowed in floor routines, but Dennis still wanted to say something with her musical selection.

The original list of possibilities for Dennis’ routine included around 85 songs, said Das, who helped choreograph all of UCLA’s routines this year. With help from music producer Jack Rayner, who was working in Australia at the time, the final mix included eight. It’s still more than Das would normally use, but Dennis fought to keep each one.

They all have meaning.

“We didn’t really settle,” Das said. “We wanted to do it right and we wanted her voice to be heard.”

When the music starts, Dennis drops to a knee and raises a fist, two simple gestures made iconic in the fight against racial injustice by Colin Kaepernick and Olympians Tommie Smith and John Carlos. Kendrick Lamar’s “Humble” leads the mix. Dennis, who calls the routine “The Culture,” picked the song because Lamar has long advocated through music. 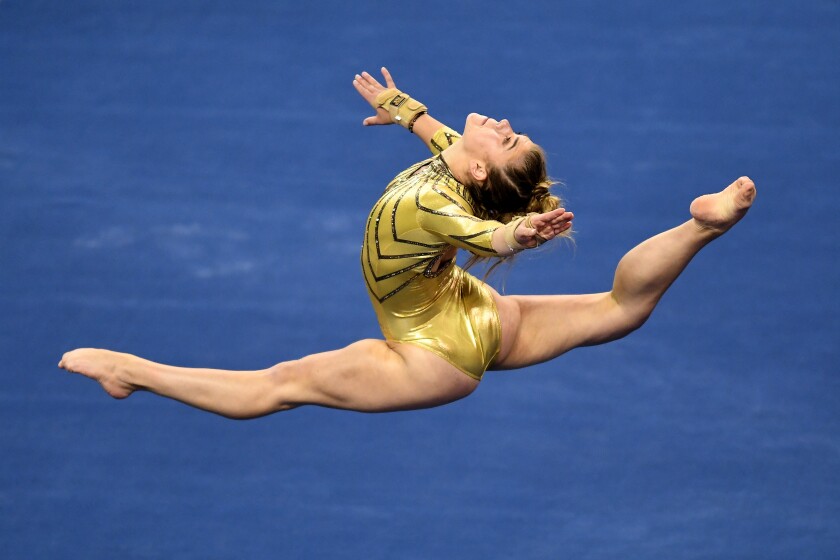 Each artist included had a significant impact on Black culture, Dennis said, whether it was through music or dance. She hits popular dance moves like Soulja Boy’s “Crank That” and the woah. The Columbus, Ohio, native heel-toes to Tupac Shakur’s “California Love” and flashes four fingers on each hand, paying homage to UCLA’s “fours up” slogan.

The senior didn’t want to leave without honoring the place that helped shape her.

“UCLA gymnastics is probably the best place to come,” Dennis said. “I’m not trying to sound any type of way, but we celebrate each other’s individuality and our differences and our cultures 100% and this is honestly the best place I could have gone to find myself.”

Dennis said she has grown “light years” during her four years at UCLA. In the process, she’s embodied different characters on the floor from the Queen of the Nile during her sophomore year to a majorette leading a band as a junior. But this final piece stands out because Dennis is not playing a character.

It seems fitting she will leave UCLA performing simply as herself.

“I just know that I have to stay true to myself,” Dennis said. “That’s always going to get me farther than anything else.”