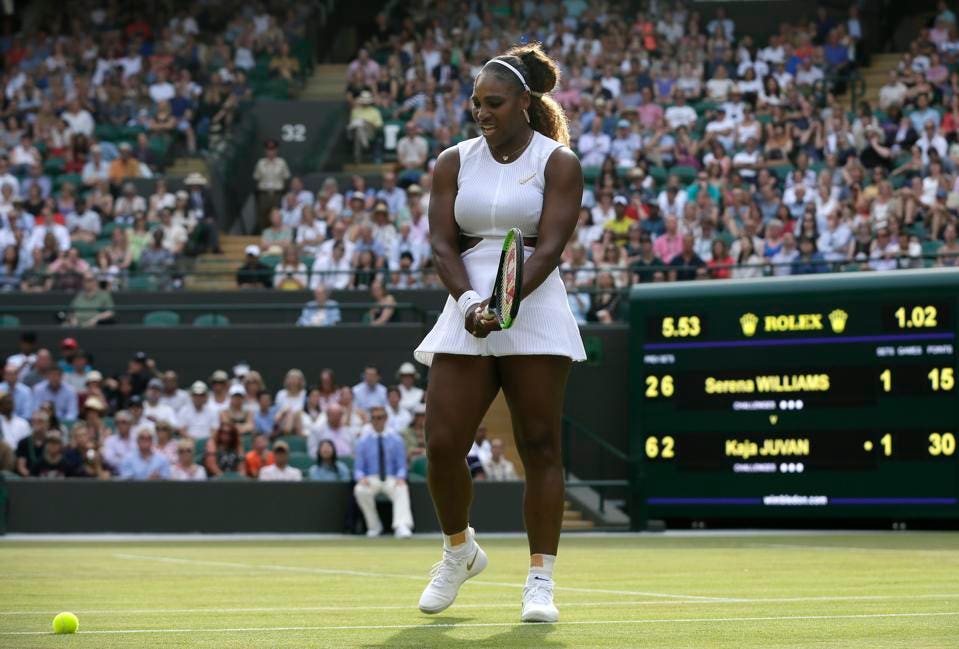 United States’ Serena Williams looks down at the ball after losing a point to Slovenia’s Kaja Juvan in a Women’s singles match during day four of the Wimbledon Tennis Championships in London, Thursday, July 4, 2019.

After dropping the first set Thursday, No. 11 seed Williams came back to beat 18-year-old qualifier Kaja Juvan of Slovenia, 2-6, 6-2, 6-4, to advance to the third round of Wimbledon. Williams, a seven-time Wimbledon champ, will next play No. 18 Julia Goerges in a rematch of last year’s semifinal won by Williams, 6-2, 6-4.

Williams’ last Grand Slam title — and last title of any kind — came at the 2017 Australian Open when she beat her older sister Venus in the final. A year ago, she lost in the finals of both Wimbledon and the US Open.

Serena turned it around in time to win the second set and earned a break in the fifth game of the third for a 3-2 lead.

After being broken in the eighth game, Serena closed out the match by serving up an ace on match point.

Serena is seeking to become the fourth mother in the Open Era to win a Grand Slam title. Since becoming a mother in September 2017 and then dealing with serious health issues in the aftermath, Serena has played 13 events without winning a title. She is 31-9 in that span, 24-4 at majors.

William, who is worth an estimated $225 million according to Forbes, has been bothered by a knee injury this year and was forced to withdraw from three straight events because of it, and lost in the third round at the French Open to Sofia Kenin. But she says she’s much better now after resting and training heading into Wimbledon.

“This was the best I’ve felt since February,” Williams said on the BBC after her second-round match. “I pretty much had to skip most of the hardcourt season and just a couple matches on clay. I’m feeling good, so it’s just so amazing.

“I am better now. I haven’t felt this way since February. I just feel so thankful and I am happy, and now I get to play with my baby. And it’s fun, I get to do everything I love.”

Williams is in the so-called “Group of Death” that initially had seven Grand Slam champions in it. World No. 1 Ash Barty advanced to the third round by beat Belgium’s Alison Van Uytvanck, 6-1, 6-4, while reigning Wimbledon champ Angelique Kerber — who beat Serena in last year’s final — lost to American Lauren Davis, 2-6, 6-2, 6-1.

Meghan Markle made a surprise appearance at Wimbledon on Thursday to support her friend Serena Williams during the tennis legend’s second round match against Kaja Juvan of Slovenia.

The Duchess of Sussex was joined at the Grand Slam tournament by her friends Lindsay Roth and Genevieve Hillis, who met as classmates at Northwestern University, according to People magazine.

The duchess and Williams have been friends for nearly a decade. Williams and her husband, Reddit co-founder Alexis Ohanian, attended Markle’s wedding to Prince Harry last year.

Last year, both duchesses attended together for their first solo outing as sisters-in-law, watching Williams in the final, in which she lost to Angelique Kerber.

After a tough first set Thursday, Williams (a global adviser to Verizon Media, HuffPost’s parent company) defeated Juvan, advancing to the third round this weekend.

Serena Jameka Williams (born September 26, 1981) is an American professional tennis player. The Women’s Tennis Association (WTA) ranked her world No. 1 in singles on eight separate occasions between 2002 and 2017. She reached the No. 1 ranking for the first time on July 8, 2002. On her sixth occasion, she held the ranking for 186 consecutive weeks, tying the record set by Steffi Graf. In total, she has been No. 1 for 319 weeks, which ranks third in the Open Era among female players behind Graf and Martina Navratilova.

Williams has won 14 Grand Slam doubles titles, all with her sister Venus, and the pair are unbeaten in Grand Slam doubles finals. As a team, she and Venus have the third most women’s doubles Grand Slam titles, behind the 18 titles of Natasha Zvereva (14 with Gigi Fernández) and the record 20 titles won by Martina Navratilova and Pam Shriver. Williams is also a five-time winner of the WTA Tour Championships in the singles division. She has also won four Olympic gold medals, one in women’s singles and three in women’s doubles—an all-time record shared with her sister, Venus. The arrival of the Williams sisters has been credited with ushering in a new era of power and athleticism on the women’s professional tennis tour. She is currently ranked at No. 10 in the world by the WTA.

Earning almost $29 million in prize money and endorsements, Williams was the highest paid female athlete in 2016. She repeated this feat in 2017 when she was the only woman on Forbes‘ list of the 100 highest paid athletes with $27 million in prize money and endorsements. She has won the ‘Laureus Sportswoman of the Year’ award four times (2003, 2010, 2016, 2018), and in December 2015, she was named Sportsperson of the Year by Sports Illustrated magazine. In 2019, she was ranked 63rd in Forbes‘ World’s Highest-Paid Athletes list.

THE WORLD SERIES, THE YANKEES VS THE PHILLIES, THE BIG DOGS ARE IN, THIS IS IT…….

USA’s Claressa Shields Wins Gold, Makes History In U.S. Boxing, Is Now A Multiple Womens Back To Back Olympic Boxing Medal Winner, One Of The Greatest