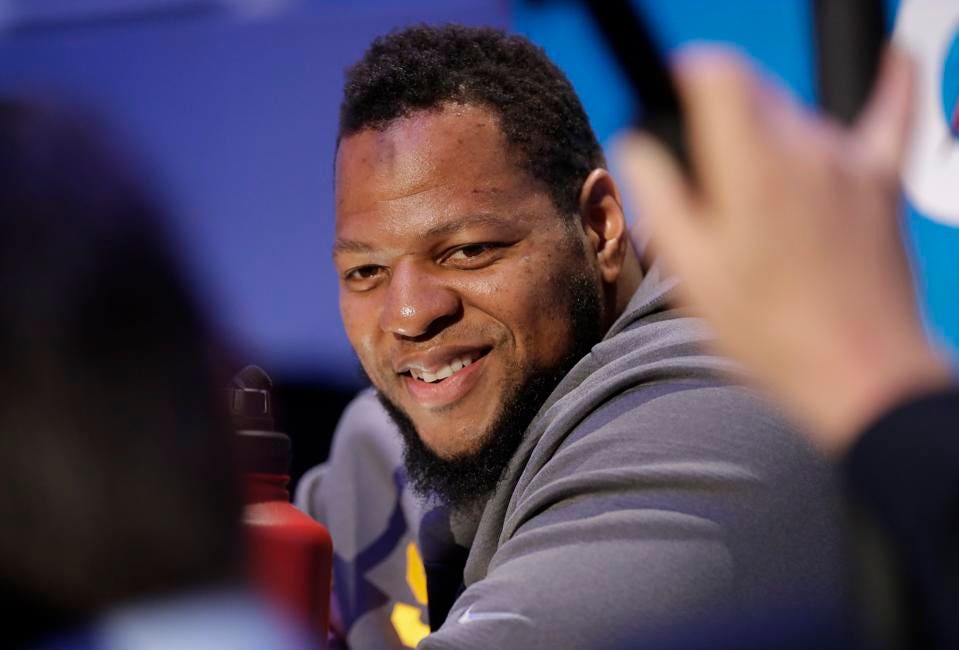 Ndamukong Suh entered the NFL nine years ago as one of the most celebrated defensive lineman in years. The massive, hard-nosed defensive tackle from Nebraska was the No. 2 overall pick by the Detroit Lions.

Now, entering his 10th NFL season at the age of 32, Suh will likely not be remembered as an all-time great player. Suh, a five-time Pro Bowl selection, was very good for several years and he is still productive, but it may be a stretch to describe Suh as a sure-fire Pro Football Hall of Fame selection.

While Suh has been good on the field in the NFL, he has been a genius in the business side of the game. According to several reports, Suh – who counts Warren Buffett as his mentor — is close to signing a one-year deal with the Tampa Bay Buccaneers. Financial terms have yet to be disclosed. However, it is important to point out that the Buccaneers parted ways with defensive tackle Gerald McCoy, who they took one pick after the Lions’ tabbed Suh in the 2010 draft, Tuesday. McCoy was due to make $13 million this season.

Clearly, the Buccaneers believe Suh is worth more than McCoy at this point.

As former Green Bay Packers’ salary-cap guru and current NFL business insider Andrew Brandt point out, Suh is about to add to his financial windfall. Brandt noted that Suh has made $139 million in the NFL. It’s the most of any defensive player in NFL history. Brandt said Suh is only behind Arizona Cardinals’ superstar wide receiver Larry Fitzgerald for career money earned for all non-quarterbacks. Brandt noted that Fitzgerald, a sure Hall of Famer, has made $163 million.

Suh was likely the best, and certainly, the most well-known player remaining in free agency. Finances clearly played a role in his long wait in free agency.

Suh waited for the best deal. Because he had made so much in his career, Suh could afford to be choosy and wait for the best deal. The deadline passed earlier this month for teams to be penalized as part of the 2020 compensatory draft pick system for signing players. So, Tampa Bay will not lose any potential draft picks for Suh. Many players don’t want to wait for that deadline to pass.

Buccaneers defensive tackle Ndamukong Suh signed in Tampa Bay without visiting, as he’s been in France celebrating his recent engagement. Still in France, Suh has now spoken about his new team.

In attendance at the French Open, Suh talked to Tennis Channel, and he said he thinks he can be part of a change in the culture in Tampa.

“I’m very excited,” Suh said. “I actually had the opportunity to talk very deeply with coach Todd Bowles, as well as Bruce Arians, two elite coaches that I’ve had great interactions with in years past. I like being part of things you can build, and be able to put them over the top. Hopefully my talent, as well as all the other guys — former Nebraskans, Lavonte David — we can play together and change the game there, and get us to a winning situation.”

Suh was in a winning situation last season, playing in the Super Bowl with the Rams. The Buccaneers have an uphill climb to get back to the postseason, but they’re hoping Suh is a part of getting them there.

Cameroon’s Ndamukong Suh, who plays for Detroit Lions in the National Football League (NFL) in the USA, has been named as Africa’s highest-paid athlete by Forbes magazine in its recently published ranking of world’s highest-paid athletes.
The 25-year old Suh is named as the 14th highest-paid athlete in the world with a total earnings of $36 million including salaries/winnings ($35.5 million) and $500,000 from endorsements.
Ndamukong Suh is the son of Michael and Bernadette Suh. His father moved to the USA from Cameroon Where he met got married with his mother Bernadette , who equally found her way to America from Jamaica.
Though an American-born, the native from the North West region of Cameroon has often been vocal of his roots as well as his elder sister and manager Odette Lennon Ngum Suh who played with the indomitable Lionesses of Cameroon at the 2008 African Women’s Championships.
Suh is joined by fellow is not the only African on the list as Cote d’Ivoire’s Yaya Toure is joint 73rd highest-earning athlete in the world with American basketball player, Tim Duncan with total earnings estimated at $19.1 million each.
American boxer, Floyd Mayweather Jr. tops the list of highest-paid athletes with $85 million, from only salary/winnings, ahead of Manny Pacquiao, from the Philippines, is in second with a total earnings of $62 million.

American golfer Tiger Woods ($54.9 million), Basketballer LeBron James ($53 million), Tennisman Roger Federer ($52.7 million), Basketballer Kobe Bryant ($52.3 million), Golfer Phil Mickelson ($47.8 million), David Beckham ($46 million), Cristiano Ronaldo ($42.5 million) and American footballer, Peyton Manning ($42.4 million) complete the top ten in that order.
The Great Philanthropist
Ndamukong’s passion for philanthropy began at a young age, donating his own clothing, books, and toys to the children of his parents’ home lands of Cameroon, Africa where Michael, his father was born and Jamaica where Bernadette, his mother was born. As he grew so did his giving. He went on to be an active volunteer at local food banks, and participated in major recycling functions with his family. Entering his college years he spent time visiting hospitals where he comforted the elderly and held babies in NICU.
His most notable giving experience came a)er his graduation but before obtaining his first post-collegiate position. He donated $2.6 dollars to his alma mater dedicated to both the athletic program and the college of engineering department of which he received his degree.
Since being dra)ed 2nd overall in 2010, Ndamukong and sister Ngum, who also serves as his business manager, started the Ndamukong Suh Family Foundation. They continue to strive for philanthropic success through the foundation, whose principles are comprised of:
• Education
• Health, Wellness & Nutrition
• International Outreach
In his efforts to encompass his foundations mission, Ndamukong and his family have developed ways to be become involved his three chief home bases:
• Portland, OR (Birthplace)
• Lincoln, NE (collegiate town)
• Detroit, MI (professional home)
Within its first year of operation, the foundation has sent Ndamukong to donate toys to the entire children of Detroit Medical Center in Holiday celebration. Ndamukong hosted his inaugural football camp in June which serviced over 350 children in Walled Lake, MI and a complete scholarship camp for over 120 inner city Detroit youth. The Suh siblings have also spent time as mentors for high school students in the DPS and the Walled Lake School districts of Michigan. The Foundation has partnered with Nike to cover the expenses for the US Grant High School football uniforms, the team Ndamukong once played for. In addition, the foundation has donated auction items to countless organizations in efforts to fund medical health research and has even adopted a school in Bamenda, Cameroon where Michael, Ndamukong’s father grew up.

The Bucs made a splash in the offseason after all, signing veteran defensive tackle Ndamukong Suh to a one-year deal on Thursday. Social media was, predictably, ablaze with reaction to the move. The Bucs needed help along their defensive line with the departure of Gerald McCoy and news that pass rusher Jason Pierre-Paul will miss significant time with a neck injury.

As a result, they went after Suh, who was an unrestricted free agent after making it to the Super Bowl last year with the Los Angeles Rams. Suh is notorious for the attitude and toughness he brings to teams and there were quite a few fans who were plenty happy to hear the news he is now a Buccaneer.

Ndamukong Ngwa Suh (/ɪnˈdɑːməkɪn ˈsuː/ in-DAH-mə-kin SOO, born January 6, 1987) is an American football defensive tackle for the Tampa Bay Buccaneers of the National Football League (NFL). He played college football at Nebraska, where he earned All-American honors, and was drafted by the Detroit Lions second overall in the 2010 NFL Draft.

As a college senior, Suh became one of the most decorated players in college football history. He won numerous awards including the Associated Press College Football Player of the Year Award, Bronko Nagurski Trophy, Chuck Bednarik Award, Lombardi Award, and Outland Trophy, and was recognized as a unanimous All-American.

Suh is recognized as one of the best defensive tackles in the NFL. In 2015, Suh was named the 24th best player in the NFL, while being the sixth highest ranked defensive player. He has won numerous awards and accolades, having been named the Defensive Rookie of the Year, while being selected to four Pro Bowls in his first five seasons, and having been named an All Pro six times. Four times to the All Pro First team, including his rookie year, and twice to the All Pro Second team. In 2015, Suh became the highest-paid defensive player in NFL history, having signed a six-year contract with the Miami Dolphins, worth in excess of $114 million, with nearly $60 million fully guaranteed; he was released after just three seasons. However, Suh has been criticized for his aggressive style of play and lack of sportsmanship. He has been fined eight times through 2014 for a total of $255,375 by the NFL, with seven for player-safety violations, and suspended once (for two games), resulting in the loss of an additional $165,294 in pay. 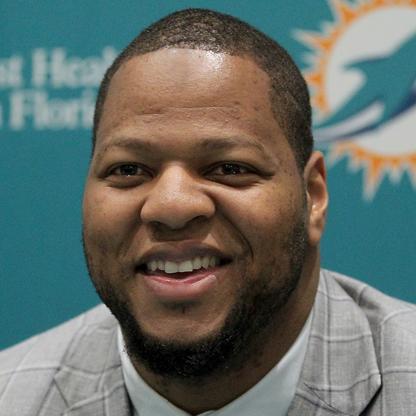 The Miami Dolphins signed Suh to a six-year, $114.3 million contract in March after Suh spent five years with the Detroit Lions. With a $25 million signing bonus and $59.9 million guaranteed, the defensive end is now the highest paid defensive player in NFL history. Suh is often mired in controversy, setting a record for personal fouls with nine in his first two years in the league. Despite paying over $200,000 in fines, the Dolphins are more interested in Suh’s high level of play and four Pro Bowl selections.

BREAKING NEWS FROM THE NBA: TED LEONSIS, THE NEW OWNER OF THE WASHINGTON WIZARDS