MISSISSIPPI STATE UNIVERSITY QUARTERBACK. MR. RAYNE DAKOTA “DAK” PRESCOTT IS THE FIRST QUARTERBACK PICKED BY THE DALLAS COWBOYS SINCE THE 2009 SEASON, NOTE: In December 2014, Prescott earned his undergraduate degree in educational psychology before receiving his master’s degree in workforce leadership only a year later. 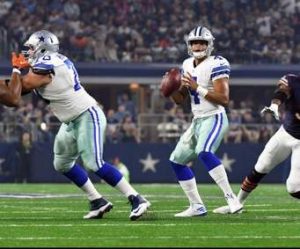 Rayne Dakota “Dak” Prescott  (born July 29, 1993) is an American football quarterback for the Dallas Cowboys of the National Football League (NFL). He played college football for the Mississippi State Bulldogs, where he was the starting quarterback from 2013–2015, and holds all school passing records.

Prescott attended Haughton High School in Haughton, Louisiana. As a senior he completed 159 of 258 passes for 2,860 yards and 39 touchdowns. He also rushed for 951 yards on 90 attempts with 17 touchdowns.

Prescott started the 2013 season and again as the backup to Russell, but took over as the starter when Russell suffered a concussion. He played in 11 games, completing 156 of 267 passes for 1,940 yards with 10 touchdowns and seven interceptions. He also ran for 829 yards on 134 carries with 13 touchdowns. He was the MVP of the 2013 Liberty Bowl after leading the Bulldogs to a 44–7 win over the Rice Owls.  His 2013 season performance ranks seventh in passing yards (1,940), tied for fifth in rushing touchdowns (13), and fourth in total yards (2,769) and total touchdowns (23). Following the season he was named to the 2013 SEC Fall Academic Honor Roll.

In his first season as a full time starter Prescott led the Bulldogs to a 10-2 regular season record, its first number 1 ranking in program history, and led them to the Orange Bowl. During the 2014 season Prescott broke 10 school-records including: single season passing yards (3,449), total yards of total offense (4,435), passing touchdowns (27), and total touchdowns (41). Additionally his 14 rushing touchdowns is tied for fourth in school history. Prescott also garnered several accolades throughout and following the season. He was named the Manning Award Player of Week 5 times (vs. UAB, at LSU, vs. Texas A&M, vs. Auburn; vs. Vanderbilt), the 2014 SEC Offensive Player of Week 3 times (at LSU; vs. Auburn; vs. Vanderbilt), the Athlon Sports, Davey O’Brien, Maxwell Award Player of Week two times each (at LSU, vs. A&M), and was the 24/7 Sports National Offensive Player of Week (at LSU). He was named a 2014 Honorable Mention All-American by SI.com, was named to the 2014 First-Team All-SEC team by the AP, Coaches, and ESPN.com and was on the 2014 SEC Fall Academic Honor Roll. He won the Conerly Trophy, was a finalist for the Maxwell Award, the Davey O’Brien award, the Johnny Unitas Golden Arm award, and the Manning Award. He also finished eighth in the 2014 Heisman Trophy voting and received two first place votes.

Prior to the 2015 season he was named a 2015 National Player of the Year Candidate, was selected to 2 Preseason All-American teams (Athlon Sports & Phil Steele) and was chosen First Team Preseason All-SEC by the media. During the 2015 season he became the fourth player in FBS history to pass for 60 touchdowns and rush for 40 touchdowns in a career, joining Dan LeFevour of Central Michigan, Tim Tebow of Florida and Colin Kaepernick of Nevada. His 2,411 rushing yards places him third in all-time rushing yards by a quarterback in SEC history behind Tebow and Matt Jones of Arkansas.  He ranks 4th in SEC history with 107 total touchdowns responsible for (passing, rushing, and receiving)[ and 5th in total yards (rushing and passing) with 11,153.  His streak of 288 consecutive pass attempts without throwing an interception is the longest in school history and the third longest SEC history. In the Bulldogs’ 2015 contest against Arkansas he set the school single game record and tied the SEC single game record for touchdowns responsible for with 7 (5 passing 2 rushing) and set a new school record for touchdown passes in a single game.  He was named the AutoNation National Offensive Player of the Week by the Football Writers Association of America, the Davey O’Brien Award National Quarterback of the Week, a Manning Award Star of the Week by the Allstate Sugar Bowl and the SEC offensive player of the week following his performance in the Bulldogs’ victory over Kentucky; a game in which he passed for 348 yards and 3 touchdowns to go along with 117 yards and 3 scores on the ground. The six touchdowns in a single contest tied the school record set by Jackie Parker in 1952 and Prescott became the first player in school history to throw for over 300 yards and rush for over 100 yards in the same game. This was the fourth time that he has been named SEC Offensive Player of the Week, the most in program history.  Prescott received further national recognition by being placed on several national award watch lists including being named a finalist for the Johnny Unitas Golden Arm Award, a semifinalist for both the Maxwell Award and the Davey O’Brien Award, placed on the watch list for the Walter Camp Player of the Year Award, the Manning Award,the Wuerffel Trophy, and the Senior Bowl, and won the Senior CLASS Award.  For the season he passed for 3,793 yards, 29 passing touchdowns and 10 rushing touchdowns.

Prescott was drafted in the 4th round of the 2016 NFL Draft by the Dallas Cowboys and will be expected to compete to be the backup to Tony Romo.

He is the son of Nathaniel and Peggy Prescott and has two older brothers, Tad and Jace and an older sister Natalie Prescott-Smith and older brother Elliott Prescott from Mr. Prescott’s previous marriage. Jace was an offensive lineman at Northwestern State. His mother died of colon cancer in November 2013.

10 things to know about new Cowboys QB Dak Prescott, including his master’s degree and his Cowboys fandom.

2. His mom died of cancer during his sophomore season

3. He’s been on the cover of Sports Illustrated — twice

4. He grew up a Cowboys fan

5. Even though Tony Romo tested his faith

6. He was randomly attacked during Spring Break 2014

8. His real first name is Rayne

9. He earned two degrees from MSU

10. The trait he feels he shares with Tony Romo

AND MANY MANY MORE.

THE MYBOYSAY SPORTS GROUP’S NATION OF NFL ENTHUSIASTS WOULD LIKE TO CONGRATULATE THE FORMER QUARTERBACK OF THE MISSISSIPPI STATE FOOTBALL TEAM, MR. DAKOTA “DAK” PRESCOTT, AND ALSO, JERRY JONES AND THE COWBOYS ON THE GREAT PICK FOR THE VERTICAL FUTURE OF THE NFL’S DALLAS COWBOYS FRANCHISE. 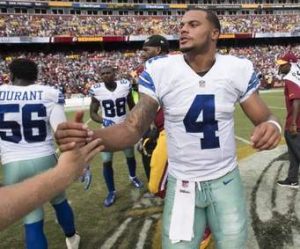 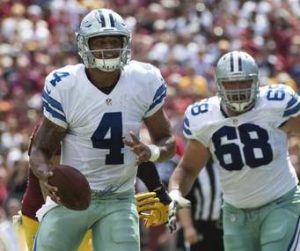 THE OKLAHOMA SOONERS SIMPLY DESTROY THE TEXAS LONGHORNS @ THEIR HOME FIELD, 63-21, AND IT WASN’T EVEN THAT CLOSE

THIS WAS MY BEST DAY EVER: Destanee Aiava Hits With The “GOAT OF TENNIS”, Serena Williams, Who Is Her Inspiration In The Tennis World