Alan Cedric Page (born August 7, 1945) is a retired jurist and former professional American football player. Page first gained fame as a defensive tackle for the Minnesota Vikings in the 1970s, and embarked on a legal career after retiring from football.Page received a B.A. in political science from the University of Notre Dame in 1967 and a J.D. from the University of Minnesota Law School in 1978. He served as an associate justice of the Minnesota Supreme Court from 1993 until he reached the court’s mandatory retirement age of 70 in 2015. Page was the first defensive player to win the MVP Award and only Lawrence Taylor has done it since. He is a member of both the College Football Hall of Fame (1993) and the Pro Football Hall of Fame (1988), and is considered one of the greatest defensive linemen ever to play the game.
Early life

Page grew up in Canton, Ohio. His parents stressed the importance of an education, and of doing his best regardless of what others did. His mother died when he was 13. Page said he wanted to become a lawyer when he was a child.

Page graduated from Canton Central Catholic High School, in Canton, Ohio, in 1963. He starred in several sports and excelled in football. Page also worked on a construction team that erected the Pro Football Hall of Fame, laying the groundwork for the building in which he would one day be enshrined.

After high school, Page attended the University of Notre Dame, where he led the school’s football program to a national championship in 1966. That same year, Page was named a college football All-American.

Page was presented with one of the 1992 Silver Anniversary Awards (NCAA) for achieving personal distinction since his graduation. In 1993, he was inducted into College Football Hall of Fame. In 2005, he was awarded the National Football Foundation Distinguished American Award.

In 1967, Page participated in the East-West Shrine Game and 25 years later received the “Babe Hollingbery” Award for his performance as he was inducted to that game’s Hall of Fame. Page was named to the Academic All-American Hall of Fame in 2001 and as such received the Dick Enberg Award. Page also won the Walter Camp Alumni of the Year award in 1988. 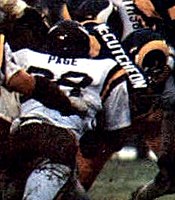 After graduating from Notre Dame, Page was drafted by the Minnesota Vikings, for whom he played from 1967 until 1978. In 1978 Page joined the Chicago Bears, with whom he played through the 1981 season and where he amassed 40 of his career sacks. He is one of 11 players to have played for the Vikings in all four Super Bowls in which they appeared.

As a right defensive tackle, he had an unusual 3-point stance, placing his left rather than his right hand on the ground. During Page’s 15-year NFL tenure, the Vikings won four conference titles and one league championship. Page was a member of the Vikings’ “Purple People Eaters,” a defensive line adept at sacking or hurrying the quarterback. Page played in 218 consecutive games without an absence (215 consecutive in the starting line-up), during which he recovered 22 fumbles, made 148½ sacks (Vikings-108½, Bears-40), and scored three touchdowns (two on fumble recoveries and one on an interception return). He also had three safeties, the second most in NFL history. He set a career-high with 18 sacks in 1976 and is unofficially credited with five other seasons of 10 sacks or more.

While in the NFL, Page earned All-Pro honors six times and made second-team all-league three additional times. He was voted to nine consecutive Pro Bowls. He was voted All-Conference 11 times, in 1968 and 1969 as All-Western Conference and in 1970 through 1977 and 1980 as an All-National Football Conference.

In 1971 Page was named both the AP NFL Defensive Player of the Year (the first player to be named such) and the AP’s NFL Most Valuable Player. Page was the first defensive player to be named MVP since the award’s inception. Only one other defensive player, Lawrence Taylor, has ever received the award. Page was also voted the NEA NFL Defensive Player of the Year in 1973.

Page was National Football League Players Association player representative from 1970 to 1974 and in 1976–1977, and a member of the NFLPA Association Executive Committee from 1972 to 1975. He was named to the Vikings’ 40th Anniversary Team in 2000. Along the way, Page was named the Associated Press NFL Defensive Player of the Week three times: Week 9, 1967; Week 8, 1968; Week 13, 1971. In 1988 Page was further honored by his induction into the Pro Football Hall of Fame. In 1999, he was ranked number 34 on The Sporting News’ list of the 100 Greatest Football Players, the highest-ranking Viking player. He received the NFL Alumni Career Achievement Award in 1995 for attaining success in his post-NFL career.

Long before Page’s football career came to a close, he was laying the groundwork for his future role as a justice of the Minnesota Supreme Court. While still playing for the Vikings, Page attended the University of Minnesota Law School, from which he received a Juris Doctor in 1978. After graduating, he worked at the Minneapolis law firm Lindquist and Vennum from 1979 to 1984 outside the football season. Page was appointed Special Assistant Attorney General in 1985, and soon thereafter promoted to Assistant Attorney General.

In 1992 Page was elected to an open seat as an Associate Justice of the Minnesota Supreme Court, becoming the first African-American to serve on that court. He was reelected in 1998 (becoming the biggest vote-getter in Minnesota history), again in 2004, and for a final time in 2010: Minnesota has mandatory retirement for judges at the end of the month in which they turn 70.

On January 7, 2009, Page was appointed by Chief Justice Eric Magnuson to select the three-judge panel that heard the election contest brought by Norm Coleman in the 2008 U.S. Senate election.

Page said, “To me the law is about solving problems and helping people.”

Community work and other activities

In 1988 Page and his wife Diane founded the Page Education Foundation. The Foundation provides much-needed financial and mentoring assistance to students of color in exchange for those students’ commitment to further volunteer service in the community, an idea suggested by Page’s daughter Georgi. The Page Education Foundation has awarded grants to more than 6,500 students, who in turn have given more than 420,000 hours of their own time to young children. Upon his retirement from the bench, Justice Page plans to continue the Foundation’s work, and find other ways to encourage students of color to be successful in school, especially by developing critical thinking skills.

Page and his daughter Kamie Page have written three children’s books: Alan and His Perfectly Pointy Impossibly Perpendicular Pinky (2013), The Invisible You (2014), and Grandpa Alan’s Sugar Shack (2017). Proceeds from the sales of these books support the Page Education Foundation.

Page has a passion for running and runs on a regular basis. In 1979, he became the first active NFL player to complete a marathon. His running routine, which he took up while helping his wife quit smoking, is believed to have contributed to his dismissal from the Minnesota Vikings. His running schedule of 35–40 miles per week during the season, and 55 miles per week in the offseason, caused his weight to drop below that dictated by the Vikings.

Page owns an extensive collection of Jim Crow-related memorabilia.[11] He appeared in a 2012 Minnesota-filmed episode of PBS‘s Antiques Roadshow with an 1865 banner mourning the death of Abraham Lincoln. In 2018, items in his collection were exhibited at the Minneapolis Central Library, coinciding with Super Bowl LII in Minneapolis.

In June 2017, after a campaign initiated by students at Alexander Ramsey Middle School in Minneapolis, the school’s name was changed to “Justice Page Middle School.”

In November 2018 Page was awarded the Presidential Medal of Freedom.

NBA UPDATE: THE DETROIT PISTONS OF THE NATIONAL BASKETBALL ASSOCIATION ARE UP FOR SALE