The Cleveland Cavaliers Are Signing 2008 NBA CHAMPION, Kendrick Perkins, To Complete Their Playoff Roster For The 2018 Playoff Season

Cleveland will sign Perkins on Wednesday, the final day of the regular season, just as it did in 2016 when guard Dahntay Jones was added, and in 2017 when both Jones and center Edy Tavares were added for the Cavs’ playoff run.

Perkins was a member of the Cavs team that made the 2015 NBA Finals and was back with them for training camp this fall, before being released during the preseason. He played part of the season for the Canton Charge, the Cavs’ G League affiliate.

Perkins, 33, won a championship with the Boston Celtics in 2008 and was part of three other Finals teams in Boston, Oklahoma City and Cleveland.

His last NBA action came during the 2015-16 season, when he averaged 2.8 points and 3.5 rebounds for the New Orleans Pelicans in 37 games.

Perkins was born in Nederland, Texas and graduated from Clifton J. Ozen High School in Beaumont, Texas in 2003. He led Ozen High to four consecutive district championships and one state championship during his high school career. Averaging 27.5 points, 16.4 rebounds and 7.8 blocked shots a game as a Senior, he led Ozen to a 33–1 record, with the only loss being a 66–54 setback to Fort Worth Dunbar in the state 4A championship game. After his senior season in 2003, Perkins was selected to the McDonald’s All-American Game.

Considered a five-star recruit by Rivals.com, Perkins was listed as the No. 3 center and the No. 6 player in the nation in 2003. He had originally committed to Memphis, but opted instead to make the jump to the NBAstraight out of high school.

The 6’10” center was drafted in the first round with the 27th pick of the 2003 NBA draft by the Memphis Grizzlies, but then, he was immediately traded along with Marcus Banks to the Boston Celtics in exchange for Troy Bell and Dahntay Jones, who had been selected by the Celtics in the same draft. 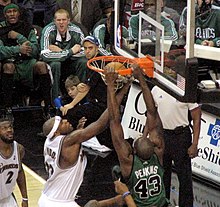 During the 2004–05 season, Perkins received more playing time than he did his rookie season, and became known as one of the tougher players on the Celtics. He had a limited role during the regular season and playoffsas the team’s “enforcer”. Perkins was involved in an unusual scenario in the final seconds of regulation in Game 6 of the 2005 Eastern Conference first round against Indiana. Paul Pierce was ejected but Pierce was owed free throws because he had been fouled before the ejection. Under NBA rules, Indiana coach Rick Carlisle chose to select Perkins (who had not played in the game) off the bench to shoot the crucial free throws (the game was tied). Perkins missed both, indirectly leading the game going into overtime, in which the Celtics eventually won.

After marked improvements during summer training and practice, Perkins earned more playing time from coach Doc Rivers during the 2005–06 season. He played some of the best games of his career in 2006, repeatedly reaching double figures in points and rebounds. After the trade of Mark Blount to the Minnesota Timberwolves, Perkins became the undisputed starting center for the Celtics, although he was already sharing starting time before Blount’s departure. He started at center for the 2008 NBA champion Boston Celtics.

In Game 6 of the 2010 NBA Finals, Perkins injured his knee and missed the rest of the game. He was inactive for Game 7, in which the Celtics fell to the Los Angeles Lakers. According to the Los Angeles Times, he suffered torn MCL and PCL ligaments in his right knee.

Perkins did not return to the floor until January 25, 2011, when he logged 17 minutes off of the bench netting 7 points, 6 rebounds and 3 assists in a win against the Cleveland Cavaliers. He received a standing ovation upon entering the game in the first quarter. After coming off the bench for his first 5 games back, Perkins returned to the starting line-up Friday, February 4 in a home loss to the Dallas Mavericks. He logged his first double-double of the season with 13 points, 12 rebounds and 1 blocked shot while shooting 6 for 7 from the field in 33 minutes.

On February 24, 2011, Perkins and Nate Robinson were traded to Oklahoma City Thunder for Jeff Green and Nenad Krstić. On March 1, he signed a multi-year extension with the Thunder.

In 2012, Perkins and the Thunder reached the NBA Finals, but were defeated by the Miami Heat.

On February 19, 2015, Perkins was traded to the Utah Jazz in a three-team trade that also involved the Detroit Pistons. He was subsequently waived by the Jazz two days later.

On February 24, 2015, Perkins signed with the Cleveland Cavaliers[9] and made his debut later that day as he scored two points in two minutes off the bench in a 102-93 win over the Detroit Pistons.[10] The Cavaliers made it to the 2015 NBA Finals, but they lost to the Golden State Warriors in six games.

On July 28, 2015, Perkins signed with the New Orleans Pelicans. He made his debut for the Pelicans in the team’s season opening loss to the Golden State Warriors on October 27. In just under 16 minutes of action as a starter, he recorded 10 points on 5-of-5 shooting and 4 rebounds. On November 6, he was ruled out for three months with a right pectoral injury. He returned to the Pelicans’ line-up on December 11, but did not play against the Washington Wizards.

On September 25, 2017, Perkins signed with the Cleveland Cavaliers, returning to the franchise for a second stint. On October 14, 2017, he was waived by the Cavaliers after appearing in three preseason games.

On October 16, 2017, Perkins agreed to a deal to join the Cleveland Cavaliers-affiliated Canton Charge of the NBA G League. Perkins played 27 games for the Charge, averaging 8.7 points and 7.1 rebounds before retiring from the G League on February 9, 2018. It was unclear from the announcement whether he was retiring from basketball or simply from the league.

On April 9th, 2018, the Cavaliers signed Perkins for a final playoff roster spot.

THE “GOAT OF GOLF”, ELDRICK TONT “TIGER” WOODS, CONVENES “The THE GLOBAL GOLF WORLD OF ENTHUSIASTS”, AND EVERY GOLF FAN ON THE PLANET, TO THE FARMERS INSURANCE OPEN, AT TORREY PINES

ANDRE DAWSON, “THE HAWK” IS IN, YES, MR. GET IT DONE IS IN THERE